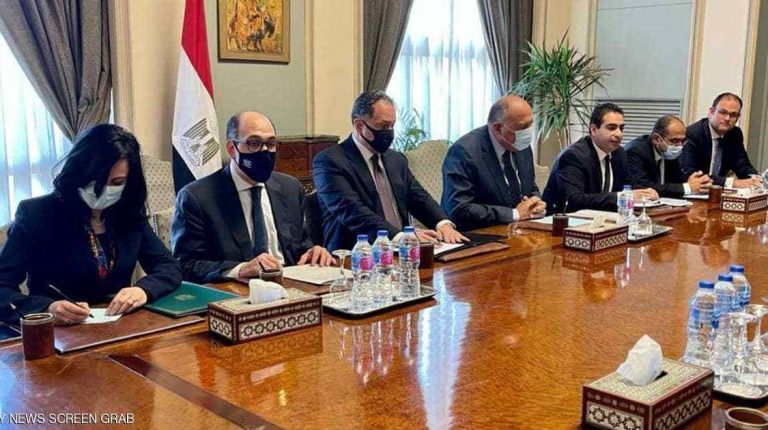 Over the course of ten years, Egypt, Sudan, and Ethiopia have held ongoing talks on a massive dam over the Blue Nile that is being constructed by the Ethiopian side.

Yet despite the decade-long efforts, there has been a consistent failure to find a resolution, with the parties not reaching any agreement regarding the filling and operation of the Grand Ethiopian Renaissance Dam (GERD).

The subject has become successively more tense, with Ethiopia announcing its intention to start the second phase of filling the dam reservoir this July. It is a move that both Cairo and Khartoum consider a threat to their own water security, and view it as a unilateral step from Addis Ababa.

Egypt had described the latest round of talks in the Democratic Republic of the Congo’s (DRC) capital, Kinshasa, as the last chance to reach an agreement on the Ethiopian Dam, after long years of negation amid divisions among the three countries on disputed points.

Egypt’s Minister of Foreign Affairs Sameh Shoukry has previously stated that “these negotiations represent a last opportunity that the three countries must seize, in order to reach an agreement on filling and operating the Grand Ethiopian Renaissance Dam (GERD) during the coming months and before the next flood season”.

However, in a separate statement, Sudan said that Ethiopia “raised the ceiling to demand that the division of the River Nile water be examined” during the negotiations.

Prior to this, Egyptian President Abdel Fattah Al-Sisi stressed that River Nile waters were a “red line”, and that harming them would have an impact on the stability of the entire region. Faced with this data, a question arises as to the options available to Egypt and Sudan to deal with the repercussions of the GERD crisis.

The dispute between Egypt and Ethiopia revolves around the period of filling and how to operate the dam, which is located on the Blue Nile.

Ethiopia said it would continue the second phase of filling of the dam’s reservoir as scheduled during the next rainy season, which is set to take place in July. It also announced, in July 2020, that it had achieved its goal in the first year of filling, an announcement that angered Egypt and Sudan.

Egypt demands that the period of the dam’s filling be extended to ten years, taking into account drought years, while Ethiopia aims to stick to four to seven years, instead of the two to three years, according to Ethiopian government sources.

The two downstream countries, Egypt and Sudan, consider Ethiopia’s construction of the dam, which is set to be the largest hydroelectric project in Africa, as a threat to their water supplies.

Ethiopia says the energy produced by the GERD will be vital to meeting the development needs of its 110 million people. But Egypt and Sudan fear that their country’s lifeblood, which is the River Nile, will be endangered.

Egypt had put forward a proposal that it said aimed to avoid drought, and which stipulated that Ethiopia would not start filling the dam without Egypt’s approval, but this was resoundingly rejected by Ethiopia.

It is noteworthy that in April 2020 the Ethiopian Government began building the dam in the region of Benishangul-Gumuz, on the Ethiopian-Sudanese border, with the aim of producing hydroelectric power. It said that the dam would help fill Ethiopia’s shortage of electric power, whilst allowing it to export electricity to neighbouring countries.

The three countries, Ethiopia, Egypt, and Sudan, held many rounds of negotiations under the auspices of the African Union (AU), but without reaching a final and binding agreement.

In light of the stalled solution due to Ethiopia’s entrenched position, Egypt and Sudan may resort to using other diplomatic pressure points.

Among these is resorting to the United Nations (UN) Security Council, with the aim of issuing decisions that are binding on all parties. This would also see a return of the negotiations to their rightful course under an international umbrella, in accordance with Article 36 of the Council’s Charter.

Article 36 of the UN Security Council Charter authorises the council to intervene in any stage of conflict between states, and issue decisions that are binding on all parties.

In addition, the Security Council can, in accordance with Article 38 of its Charter, impose international mediation or issue an arbitration decision regarding the dispute.

In accordance with Article 38 of its charter, the council can also impose international mediation or issue an arbitration decision, to avoid any conflict or war that might break out between the countries involved.

Egypt and Sudan can rely on these two articles to put pressure on Ethiopia, according to experts in international law.

But in addition to this, experts believe that Cairo and Khartoum have other pressure points that they can apply on Addis Ababa, such as economics. Both have the option to activate this to stop international financing of the GERD, based on the inadmissibility of financing the dams that are caught up in disagreements.

Egypt and Sudan can activate such pressure points before the international community, in order to implement international laws and conventions.

Thus, several pressure points are still in the hands of the two downstream countries, through which they can move to push the Ethiopian side to conclude a binding legal agreement that takes into account the interests of all parties.

The continued failure to reach a solution regarding the GERD, which Egypt and Sudan insist poses a real threat to the lives of millions of their respective citizens, may make the two countries think of using different pressure points. However, the diplomatic and legal options remain the closest at hand, according to many observers.

Abbas Sharaqi, Professor of Water Resources at Cairo University, said in an interview with the Masrawy website, “Egypt’s options, far from using the military machine, are represented by the Security Council, and the issuance of binding decisions to restart negotiations under an international umbrella that has the tools to pressure all parties.”

The GERD negotiations saga started in 2011, when the downstream Nile Basin countries, Egypt and Sudan, expressed concern over the surprise announcement of the dam’s construction.

In 2012, Egypt, Sudan, and Ethiopia formed a 10-member International Panel of Experts (IPoE) featuring two representative members from each country, including four international specialists to study the River Nile dam.

In 2015, two consultancy firms were contracted to study the dam’s impacts, namely France’s BRLi, and Deltares of the Netherlands. Later, Deltares withdrew from studies, citing concerns about the lack of independence.

Until 2017, the recommended studies have not been undertaken. In 2018, the three countries established the National Independent Research Study Group (NIRSG) on the GERD’s filling and operation. Afterwards, Egypt presented a balanced comprehensive proposal on the dam, satisfying Ethiopia’s development goals.

In 2019, Ethiopia summarily rejected Egyptian proposals after a 2-day ministerial meeting in Cairo, and later that year, the NIRSG failed to produce an agreement. Egypt, Ethiopia, and Sudan then resumed GERD talks, under US Treasury and World Bank observation.

A total of 12 meetings were conducted between November 2019 and February 2020, with Ethiopia refusing in February 2020 to sign a GERD draft agreement initiated by Egypt.

In March 2020, Egypt rejected Ethiopia’s statement on a unilateral dam filling without agreement. Only two months later, in May 2020, Ethiopia criticised an Arab League resolution that lent its support to Egypt’s position.

Egypt stressed that the Nile dam will not be filled without agreement. In the same month, Sudan rejected an Ethiopian offer to sign a bilateral agreement, insisting that Egypt should be included. Afterwards, Ethiopia agreed to resume negotiations with Egypt and Sudan.

54th Cairo International Fair to kick off in September