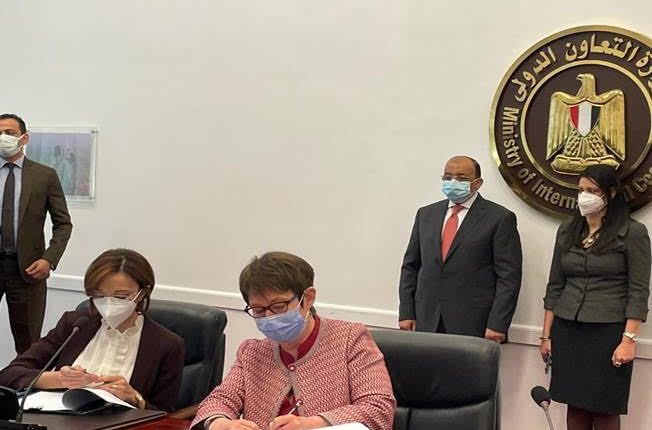 The 6th of October City has joined two other major cities in Egypt, Cairo and Alexandria, as a member of the European Bank for Reconstruction and Development’s (EBRD) flagship urban sustainability programme, Green Cities.

Renaud-Basso stated, “The Bank will assist the governorates of Cairo and Alexandria, and the New and Urban Communities Authority (NUCA) in identifying, prioritising, and connecting cities’ environmental challenges with sustainable infrastructure investments and policy measures.”

She continued, “The EBRD looks forward to working with Egypt on this flagship programme, to support the development of greener infrastructure, and building a better and more sustainable future for city residents.”

“Contributions from our donors, including the TaiwanBusiness-EBRD Technical Cooperation Fund and the Austrian Federal Ministry of Finance via the EBRD-administered City Regeneration and Environment (CREATE) Fund, are fundamental in providing the necessary support for the implementation of Green City Action Plans (GCAPs) in Egypt,” she added.

Minister Al-Mashat commented, “The path to a green future begins in our cities. The government of Egypt is paving the way for inclusive and resilient infrastructure through sustainability-led urban development and low-carbon mobility. Our partnership with the EBRD in its flagship urban sustainability programme serves as a regional example for future city development, ensuring a green and safe urban environment for all. This is integral to achieving the 2030 Sustainable Development Goals.”

The purpose of the €2.5bn EBRD Green Cities programme is to provide finance to invest in sustainable municipal infrastructure to help cities become greener. With almost three-quarters of greenhouse gas emissions coming from cities, this is an effective way to tackle climate change.

With support from the EBRD and international donors, each member city draws up a tailor-made GCAP to identify its own priorities in tackling its most pressing environmental challenges.

Urgent improvements to the transport networks of Cairo and Alexandria have been identified as the trigger projects for those two cities. In Cairo, the EBRD is interested in supporting the rehabilitation and upgrade of Metro Line 2. In Alexandria, the focus is on upgrading and electrifying an existing metro line that connects downtown Alexandria with the north-eastern town of Abu Qir.

In addition, the development of a dry port in 6th of October City, a modern satellite town that forms part of the urban area around Cairo, is the first project to be explored under the EBRD’s MoU with NUCA.

NUCA is in charge of urban development in Egypt. Four in ten Egyptians live in cities and the urban population in this country of more than 100 million people is rising by more than 2% a year. Aiming to establish new urban centres, redistribute the population away from the narrow strip of the Nile Valley, and extend the axis of urban expansion to desert and remote areas, NUCA identifies new city sites and formulates their development strategies. It also ensures the good functioning and management of infrastructure and public facilities in new cities.

The Thursday’s MoUs pave the way for the EBRD and NUCA to explore further cooperation on green infrastructure development in other cities that are under NUCA’s remit.

The 6th of October City becomes the programme’s 46th member.

Egypt is a founding member of the EBRD. Since the start of its operations there in 2012, the Bank has invested close to €7.2bn in 127 projects in the country.

CBE to review interest rates amid strong expectations of no change