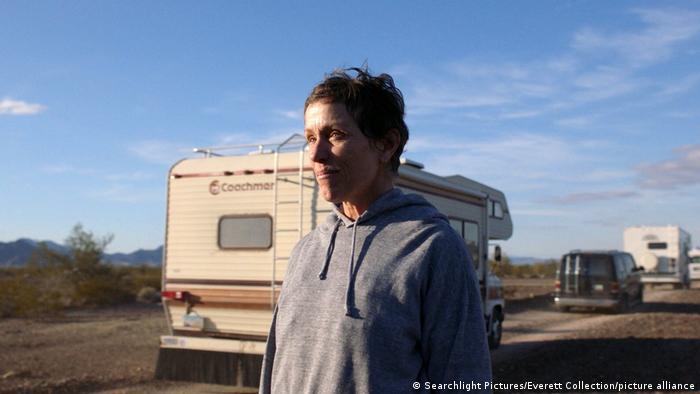 Chinese filmmaker Chloe Zhao’s latest film, Nomadland, a tale about a woman who decides to live out of her van and travel around the American West, has broken records at the 2021 Oscars.

During the 93rd Academy Awards ceremony on Sunday, Zhao was named best director for Nomadland, making her the first Asian woman and only the second woman ever to take the trophy home, following Kathryn Bigelow in 2010. Zhao thanked the nomadic community for “teaching us the power of resilience and hope, and reminding us what true kindness looks like”.

The film also won the Academy Award for best picture. Frances McDormand, one of the few professionals in the film in which several people played versions of themselves, picked up her third best actress award for her performance in the film.

Moreover, legendary Welsh actor Anthony Hopkins became the oldest winner of the best actor prize for his role as a dementia-sufferer in The Father.

The Oscar had been widely expected to go to the late Chadwick Boseman for his final film, Ma Rainey’s Black Bottom. This is Hopkins’ second best actor Oscar, his first coming 30 years ago for his role in Silence of the Lambs.

After strict testing and quarantine protocols against the novel coronavirus (COVID-19) pandemic, nominees and their guests walked the red carpet, mostly maskless. They sat in a cabaret-style room inside Los Angeles’ Union Station, a Mission Revival-style rail station, or chatted in an outdoor courtyard.

The prospect of all four acting honours going to people of colour for the first time was not realised. However, 15 women won a record 17 Oscars, the Film Academy said, including for sound (Sound of Metal), production design (Mank), original screenplay (Promising Young Woman) and documentary feature (My Octopus Teacher.)

Daniel Kaluuya won best supporting actor for playing Black Panther Party leader Fred Hampton in Judas and the Black Messiah. Hampton was assassinated by the FBI in 1969 when an informant infiltrated the party.

Korea’s Youn Yuh-jung took home the best supporting actress award, becoming the first Korean person to win an acting Oscar and the second Asian actor to win an acting Oscar. She played mother-in-law Soon-ja who joins her son’s family in the US state of Arkansas to start a new life in Minari.

The best adapted screenplay prize went to Christopher Hampton and Florian Zeller of The Father.

Pixar film Soul, a film about death and jazz, which was the first Pixar film to feature an African American protagonist, won best animated film, as well as best score. One of its composers, Jon Batiste, became the second Black composer to win the award.

Korea Advanced Institute of Science and Technology expands into Egypt

Performers of ‘Oscars: Into the Spotlight’ original songs announced