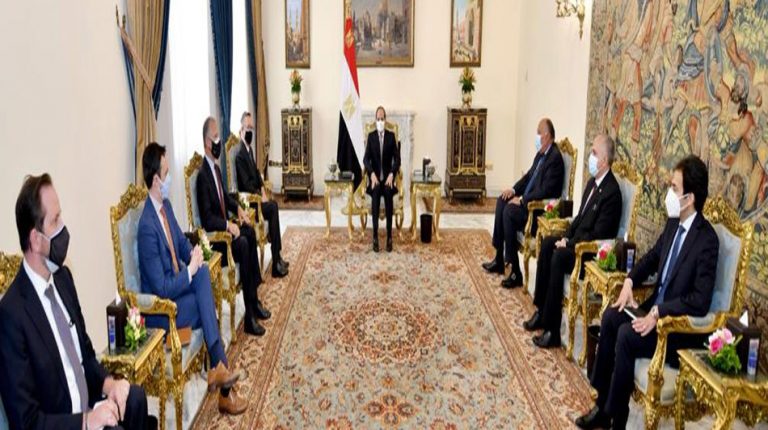 Egypt’s President Abdel Fattah Al-Sisi met, on Wednesday, with the US Special Envoy for the Horn of Africa Jeffrey Feltman, and asserted that Egypt will not accept any harm to its water interests.

According to an Egyptian Presidency statement, the meeting took place in the presence of: Sameh Shoukry, Egypt’s Minister of Foreign Affairs; Mohamed Abdel Atty, Minister of Water Resources and Irrigation; and US Ambassador to Egypt Jonathan Cohen.

Feltman is starting his tour of Africa with a visit to Egypt, and will later head to Eritrea, Ethiopia, and Sudan. He will meet with officials from the respective governments as well as the United Nations (UN) and the African Union (AU).

He will also meet with a range of political stakeholders and humanitarian organisations. According to the US Department of State, Feltman’s visit “underscores the Administration’s commitment to lead a sustained diplomatic effort to address the interlinked political, security, and humanitarian crises in the Horn of Africa.”

The statement added that Feltman “will coordinate US policy across the region to advance that goal.”

Bassam Rady, spokesperson for the Egyptian Presidency, stated that Al-Sisi congratulated the Feltman on his recent appointment to the position, and wished him success in his mission and in dealing with regional issues.

Al-Sisi also expressed his hope that this would take place in a way that enhances security, stability and development in the region. It comes particularly at a time when the Horn of Africa is facing several complex challenges that threaten to undermine its stability, and hence the importance of intensive US engagement to contain these challenges.

The President affirmed Egypt’s keenness to enhance bilateral cooperation with the US, as part of the strategic partnership relations between the two countries.

Feltman affirmed that the US valued the strategic relations with Egypt, in a way that contributes to achieving balance in the region. He also asserted the US’ keenness to advance cooperation frameworks between the two friendly countries, bilaterally and regionally.

The spokesman added that the meeting witnessed discussions on a number of regional files in Africa, foremost of which are the developments in the Grand Ethiopian Renaissance Dam (GERD) file.

Feltman stressed that the US administration is serious about solving this sensitive issue given the great importance it represents to Egypt and the wide region, which requires reaching a fair and comprehensive settlement.

Al-Sisi reviewed in detail the developments in the GERD file, and affirmed Egypt’s flexible approach in dealing with this issue over the past few years via the various negotiation tracks.

The Egyptian stance has always been based on seeking a fair, balanced, and legally binding agreement that fulfils the interests of Egypt, Sudan, and Ethiopia, and takes into account Egypt’s rights, interests, and water security.

Al-Sisi added that all efforts made during the negotiation process did not reach the desired agreement due to the absence of the political will of Ethiopia.

New UK Ambassador to Egypt to arrive in September

We want Egypt and Sudan to agree to second filling only: Ethiopia

Unilateral Ethiopian practices have grave consequences on River Nile: Egypt Amb. to US