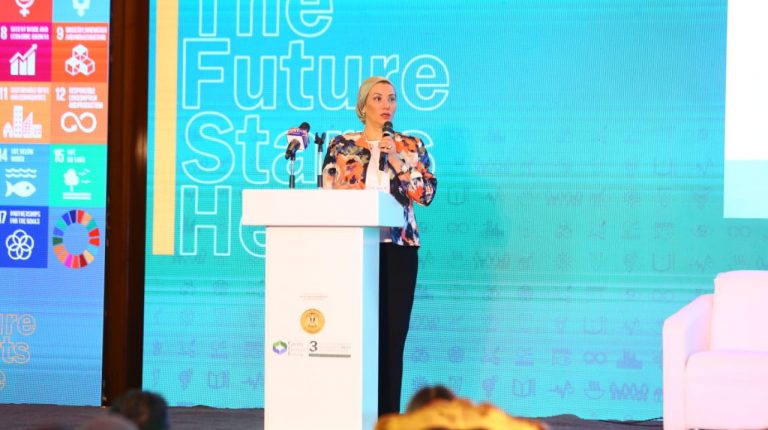 Egypt’s Minister of Environment Yasmine Fouad reviewed the steps taken by the state during the past few years towards moving to a green economy.

These steps include improving the quality of life of citizens and achieving social justice, taking into account environmental dimensions.

The remarks came during her speech, made on behalf of Prime Minister Mostafa Madbouly, at the 3rd Forum on Strategies to Transform to Green Economy. The event took place under the title “Sustainable Finance and Green Investment” on Monday.

During her speech, Fouad pointed to the projects and models that illustrate the switch to a green economy in Egypt, such as the country’s biogas project, and the efforts to reduce the use of plastic bags and recycling rice straw.

The minister noted that the steps to transition to a green economy began with a focus on conserving the consumption of natural resources nationwide.

It also included emphasis on locally produced items, as well as whether there are sustainable patterns of production and consumption taking place. This also takes into account environment sustainability standards.

Fouad added that the Ministry of Environment has played its role as part of the Egyptian Government in putting forward ideas, developing solutions, and finding different development patterns.

This ensured that new national projects appeared, and the country achieved a breakthrough in new and renewable energy projects.

It included the implementation of the largest project in the Middle East for solar energy, Aswan’s Benban Solar Park Project, as well as green transportation projects, and converting cars to run with natural gas.

She further noted that the new solid waste management system is one of the national projects that take into account the transition to a green economy. The system aims to establish 80 sanitary landfills, 60 waste recycling plants, and 120 intermediate stations nationwide.