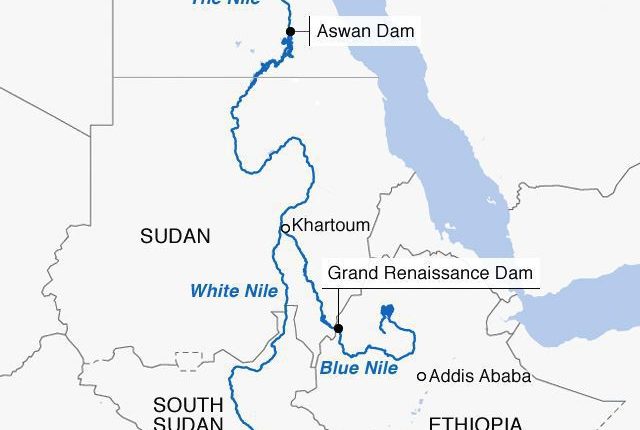 Egyptian researchers in the US have published a study warning of a further threat that may affect the North African country as a result of the Grand Ethiopian Renaissance Dam’s (GERD) construction.

The study, published in the journal Environmental Research Letters, led by Egyptian researcher Essam Heggy, warned that inaction in the face of the potential water deficit due to the dam’s construction on the Blue Nile, and reaching a joint agreement on filling and managing the dam, may cause serious effects on the Egyptian economy.

According to the study, the average total annual water budget deficit expected for Egypt during the filling period may reach about 31 billion cbm per year. This takes into account factors such as water intrusion in the fractured rocks below and around the GERD’s reservoir.

The figure may exceed a third of Egypt’s current water budget, in the absence of potential mitigation efforts by the relevant Egyptian authorities.

As a result, the Egyptian agricultural area faces a potential decline by an alarming rate of up to 72%, whilst the national product per capita in Egypt is expected to decrease by up to 8%. This would, in turn, see the unemployment rate potentially reaching 25%, according to the worst scenarios presented by the study.

This may lead to a state of social and economic instability, and a possible increase in the movement and migration, both internal and external.

The study is a review of a large number of studies that dealt with the issue of the Ethiopian dam and its effects on Egypt. After collecting a large amount of scientific material from the results of these studies and research, the authors produced a model for estimating the level of economic risks to Egypt through a number of scenarios.

As for the most optimistic scenario, according to the study, it is assumed that filling GERD’s reservoir will occur over a period of 29 years. At this time, the water deficit in Egypt will be about 3 billion cbm of water, a deficit that Egypt can handle without problems.

Egypt is one of the most arid countries in the world, and currently suffers from a 90% gap in its water resources. The country receives about 70% of its water flow from the Blue Nile and Atbara Rivers, both stemming in the Ethiopian plateau, and which merge to become the main River Nile in northern Sudan.

The River Nile is Egypt’s lifeblood, with its waters providing the country with about 97% of its present water needs. This amount of water equals only 660 cbm per person, one of the world’s lowest annual per capita water shares, which averages 1,000 cbm/year. Egypt’s Nile water share equals 55 billion cbm.

Egypt’s Minister of Water Resources and Irrigation Mohamed Abdel Atty said that the expected harm due to the Ethiopian dam would occur at the time of drought, but that Egypt is ready to deal with this.

“We have a plan that has been in place for five years, including decreasing rice, cane, and banana cultivation areas, and lining canals,” he said.

These will develop water resources, preserve water when used, purify it, and protect it from pollution. Meanwhile, the ministry is also creating the appropriate environment for implementing these aspects.

Abdel Azeem noted that the ministry is working on implementing a modern irrigation system as an alternative to flood irrigation. The Ministry of Water Resources and Irrigation has also implemented programmes and campaigns to educate farmers and citizens about the importance of balanced water consumption.

In addition to this, the ministry is undertaking several studies to estimate Egypt’s underground reservoir, and its potential uses in development without depleting this non-renewable natural resource.