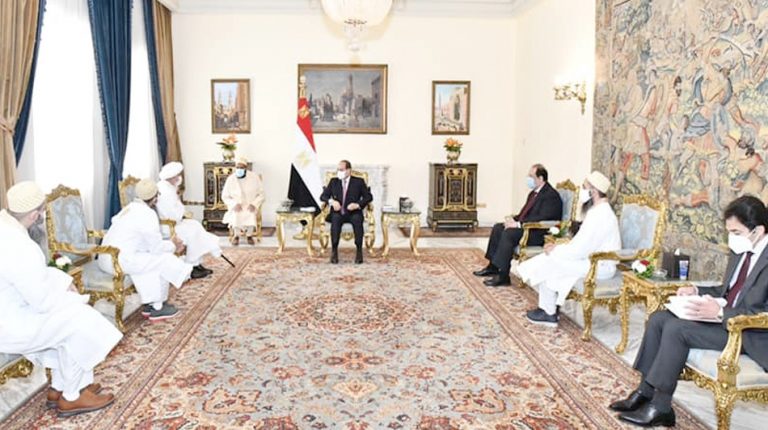 Egypt’s President Abdel-Fattah Al-Sisi has highlighted Egypt’s historic relations with the Dawoodi Bohra sect, during his meeting with the Indian leader of the sect, Sultan Mufaddal Saifuddin.

The religious leader was accompanied by his sons, Prince Jaafar Al-Sadiq, Prince Taha Mofaddal, and Prince Hussein Mofaddal. The meeting with the Egyptian leader took place in the presence of Abbas Kamel, head of the General Intelligence Service (GIS).

Al-Sisi stressed the historic ties between Egypt and the Dawoodi Bohra community, and hailed the sect’s constant openness to all religions and sects. He also noted the firm belief in the importance of dialogue among different communities around the world.

Egyptian Presidency Spokesperson Bassam Rady said that Al-Sisi welcomed Saifuddin, and expressed sincere appreciation for the latter’s role in restoring and renewing shrines and many Islamic sites in Egypt.

This includes a number of historical Egyptian mosques, the latest of which is the restoration of the shrines in the mosques of the Sayda Nafis and Al-Hussein. Sultan Mufaddal Saifuddin previously donated EGP 10m to the Tahya Misr fund.

President Al-Sisi affirmed Egypt’s deep belief in the importance of dialogue among all the peoples of the world, with their various sects and ethnicities, and the country’s permanent openness to all religions and sects.

Sultan Mufaddal Saifuddin expressed his honour at meeting Al-Sisi, and noted his appreciation of Egypt’s current path regarding the freedom to practice religious rites, and peaceful coexistence between all religions.

He also praised the recent developmental achievements in Egypt in various fields, in addition to the country’s active role in the region. This was most recently embodied in Egypt’s role in the ceasefire agreement between the Palestinians and Israelis, as well as the Egyptian initiative for the reconstruction of the Gaza Strip.

This was along with Egypt’s continuous efforts to support a political settlement to the crisis in neighbouring Libya.