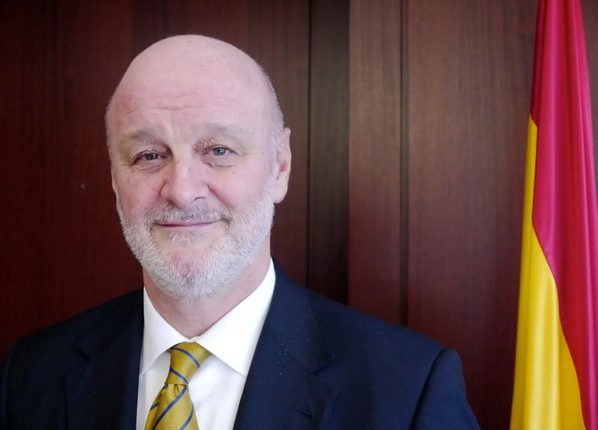 Egypt is an indisputable regional power, and plays a capital role in ensuring stability, security and sustainable development in the Middle East region, according to Spain’s Ambassador to Egypt Ramón Gil Casares.

The ambassador added that Egypt’s soft power, and cultural, historic, and religious heritage place it in a unique position to project and exert considerable influence on the Arab world as a whole.

In an interview with Daily News Egypt, Casares said that Spain, like Egypt, is a Mediterranean country, and that both countries have shared not only a geographical space for centuries, but also a common heritage.

As a result, the closeness, friendship, and mutual understanding characterise the relations between the two countries, he said.

“These two aspects were highlighted by [Spain’s] President Pedro Sánchez in his recent conversation with [Egypt’s] President Abdel Fattah Al-Sisi,” he said.

The interview touched on all aspects of cooperation between the two countries, and the plans for the future.

What are Spain’s priority files in diplomatic relations with Egypt? What are the cooperation files that need enhancing?

Our partnership with Egypt touches upon many different files. But if I had to highlight two issues, I will no doubt select the fight against terrorism, and against human trafficking and illegal migration, files where we have a particularly close and fruitful collaboration.

But we need to keep working together to give new impetus to our economic and trade relations. This is especially true since the process of reforms and important projects undertaken by Egypt in these last few years

At the level of higher education and research, there are also very interesting projects of cooperation which I am hopeful will crystallise soon.

What are the aspects of security cooperation between the two countries due to their agreement on the importance of combating terrorism?

Spain resolutely supports Egypt’s efforts in the fight against terrorism, a scourge that our country has also suffered in its own flesh. I could not think of a nobler and more important cause for a state than protecting the innocent and defending the weak.

I cannot go into many details, but the exchanges between the security services of our countries are deep and intense. Anti-terrorist collaboration remains fluid, covering both operational and strategic aspects as well as training.

We know that there are no shortcuts when it comes to facing terrorism. In this regard, you need efficient and professional police forces and information services working within the framework of the rule of law. This is also with full respect for human rights, and takes place in constant security cooperation with international partners. Spain stands ready to continue supporting Egypt.

Have Egypt and Spain started implementing the agreement for exchanging fugitive criminals?

We are currently negotiating two bilateral agreements of cooperation on criminal matters and extradition, respectively. The process is going at a slower pace than we expected, but we understand that these are sensitive matters.

Do Cairo and Madrid cooperate on illegal migration, and how far?

Egypt remains a key country for the control of migratory routes to Europe, and the fight against human trafficking and illegal migration.

It all comes from the experience in 2015, in the suffering of Egyptians that drowned in the hands of human traffickers, especially after a boat capsized close to the city of Alexandria.  It was then that President Al-Sisi and his government decided this had to stop.

They all have proven very successful in controlling migration flows and combatting human trafficking. They have been an essential tool for the protection of the personal rights and dignity of Egyptian citizens and third country migrants alike.

Egypt has set, in this field, an example that unfortunately not every country has followed. It is important also to underline that these actions were taken not in reaction to, or as a consequence of funding coming from other nations, but out of pride and self-respect, and for the protection of its citizens, especially the young and the weak.

Bilaterally, we will soon proceed with the signature of a project, financed by the EU Trust Fund with €3m, and implemented by the Spanish Agency for International Development Cooperation (AECID). This is to enhance migration management in Egypt through institutional support and capacity building.

Through this project we seek to support the objectives of the National Strategy for combating and preventing illegal migration, as well as human trafficking. Setting this important project in motion will contribute to continuing strengthening our already excellent cooperation on migration issues.

Has Spain adopted a specific position on the dispute between Egypt and Ethiopia on the Grand Ethiopian Renaissance Dam (GERD)?

Spain is well aware that water management is of the utmost importance for Egypt and all Nile Basin states. We fully understand the transcendence and implications of the issues being discussed. Of course, we all know, specifically, what the waters of the River Nile mean for Egypt and its people. That is why we are closely following the ongoing mediation process by the African Union.

Spain also had to learn how to manage increasingly scarce water resources, as we also share our most important rivers with our neighbour, Portugal. Our experience tells us that, with good will and mutual understanding from both sides, there are ways to establish mechanisms to manage water resources from shared river basins for the benefit of all the riparian states.

At this moment, the only mediation efforts are the ones led by the African Union (AU), as you know. Of course, I am aware that the EU, the US, and the UN have had a role to play at some point during the process. Spain will of course wholeheartedly support the work of our Special Envoy Ambassador Alexander Rondos and his team.

Can you tell us more about Egypt and Spain’s trade exchange in the first quarter (Q1) of 2021?

The foundations of the trade exchanges between our countries remain solid. We are happy to see that during the first three months of 2021, both exports and imports between Spain and Egypt have grown compared to the first few months of 2020.

Last year, the total trade exchange between Egypt and Spain reached €2.125m, a decrease of 11% compared to 2019. This year, the growing commercial flows in 2021 are a very good sign, recovering to pre-pandemic figures.

What are the main exports and imports from Egypt?

The main Spanish imports from Egypt are mineral fuels and oils, plastics, non-knitted clothing, ironworks, iron and steel, and fertilisers. Meanwhile, Spain’s exports to Egypt in 2020 were  mechanical machinery cars, motor vehicles, tractors, electrical equipment and material, and copper and its manufactures.

What about investments from Spain?

The most noteworthy investments from Spain are in the renewable energy sector, transport, water treatment, mineral industry, financial instruments, the food industry, civil engineering and electrical equipment manufacturing, and construction. I truly believe that our economic relations should, and will, keep intensifying in the near future.

What are the main challenges that still prevent Spanish companies and private sector entities from investing in Egypt?

Entering new markets can always be a daunting experience for companies, and Egypt is no different to many other countries in this regard. It requires not only a very solid financial position, but also the ability to successfully navigate the complexities of local regulations and procedures.

As I said before, Egypt is an attractive country for investment with large development projects, and in which Spanish collaboration can be very beneficial.

What place does the tourism file occupy on the map of cooperation between the two countries? How many tourists visited Egypt during the first three months of 2021?

The number of Spanish tourists visiting Egypt is still conditioned by COVID-19.  However, the number of tourists before the start of the pandemic had reached a record high.

Interestingly, most Spanish tourists come to Egypt attracted by its cultural and archaeological heritage.  Spaniards are Nile and Cairo tourists, though there is an increase in diving in the Red Sea among our youth.

Culture is pivotal in strengthening international relations, and constitutes an essential part of what has been called “soft diplomacy”.

Year in and year out, exchanges at the academic level or in the sphere of it are a testimony to these cultural links. In the coming months, we have a plan to deepen this cultural exchange in many fields, namely: literature; music; Flamenco; cinema; archaeology; sports, particularly as everyone in Egypt follows the Spanish League; and gastronomy. We are very excited about some of the events

But let me share with you some examples of the things that Spain has recently done:

We will continue with different activities in the many fields I have just mentioned.

Foundations of the trade exchange between Egypt and Spain remain solid, with exports and imports growing in the first months of 2021

At the level of higher education and research, there are also very interesting projects of cooperation which I am hopeful will crystallise soon

US Envoy for Horn of Africa visits Djibouti, Ethiopia, and UAE

Ethiopian remarks on GERD provocative, Egypt knows how to defend its interests: Shoukry