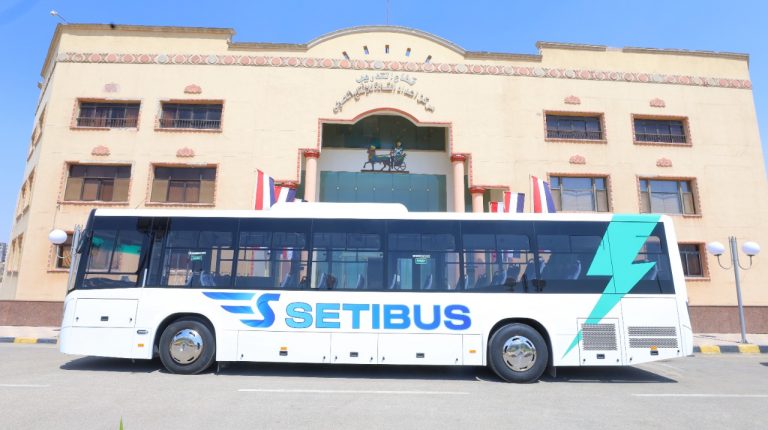 Egypt has successfully produced the first locally built electric bus, in a bid to keep pace with the global trend of switching to electric vehicles (EVs).

A total of 60% of the bus was made up of local components and was fully built by Egyptian workers. Last week, the Ministry of Military Production announced that joint cooperation has started with the bus and truck maker, Manufacturing Commercial Vehicles (MCV).

According to the ministry’s statement, EVs are more environmentally friendly and contribute to reducing carbon emissions, making them significant for the efforts to combat pollution.

The Ministry of Military Production said that the bus was designed by Egyptian engineers, and all parts of the external and internal structure of the bus were designed and manufactured in Egypt, including glass, tires, seats, and basic raw materials.

The new 49-seat electric bus can cover between 300-350 km on a single charge, depending on operating conditions and temperature. It has a maximum speed of 70 km/h, in addition to working in varying temperatures up to 45 degrees Celsius.

According to the Ministry of Military Production, the production capacity of the project will start with the manufacture of 300 buses in the first year, increasing to 500 buses in the second year. It pointed out that the electric buses are more expensive than those buses operating on fossil fuels, costing at least EGP 3m.

However, their operating costs are much lower, and the price difference is recovered within a period of three to five years.

Hisham Tawfik, Minister of Public Enterprise Sector, announced this month that the Chinese company would supply 13 electric cars for testing in the Egyptian streets. He said that the production of the new electric car is scheduled to start in mid-2022.

In conjunction with the first phase of the new car’s production, about 3,000 electric charging stations will be established. A committee from the Ministries of Public Enterprise Sector, and Local Development, was formed to select the proposed locations for these stations.

In 2019, the Ministry of Petroleum and Mineral Resources decided that electric charging points are mandatory at any new fuel stations aiming to acquire permits.

In June, Infinity EV, a subsidiary of renewable energy firm Infinity, announced a cooperation plan with the government to establish 6,000 electric vehicle charging points across 3,000 charging stations across Egypt by 2023.

In a press release, the company said that the first phase aims to deploy 2,000 charging points across 1,000 stations in Greater Cairo, Alexandria, and parts of Qaliubiya.

According to the agreement, Infinity will establish, operate, and maintain the chargers, and until a final tariff for charging is set by the Ministry of Electricity and Renewable Energy, charging at the points will be for free.