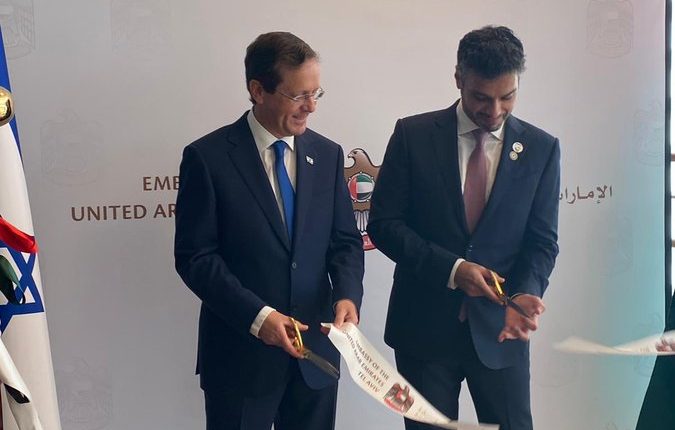 The UAE opened its embassy in Israel, on Wednesday, in an official ceremony that marked the latest step under a normalisation agreement brokered by the US last year.

The UAE’s Ambassador to Israel Mohammed Al Khaja described the opening of the embassy as “an important milestone in the growing relations between our two countries”.

Speaking at the ceremony, which was attended by the new Israeli President Yitzhak Herzog, Al Khaja said, “The UAE and Israel are innovative countries, and we can harness this creativity to work towards a more prosperous and sustainable future for our countries and our region.”

​​He added, “The embassy will be a headquarters for the continuity of cooperation between UAE and Israel to secure the foundations of peace.”

For his part, Herzog expressed his happiness to participate in the opening of the UAE Embassy in Israel at the beginning of his term.

“The UAE and Israel have a lot in common. Peace is not born in conferences, but in people’s hearts, and we must expand peace agreements for other countries,” he said.

He continued, “I look forward to visiting the UAE and working with the leadership to expand the circle of peace.”

Herzog called for an expansion of the “historic agreement” with the UAE “to include other countries that seek peace with Israel”.

The embassy is located in the new stock exchange building in Tel Aviv, in the heart of Israel’s financial district. The location is noteworthy as it sheds light on the central role played by economic cooperation in the agreement between the two countries.

Israel and the UAE signed a set of deals on a range of topics, including tourism, aviation, and financial services, after normalising relations in what have been called the Abraham Agreements, brokered by the administration of former US President Donald Trump.

Israel’s new Minister of Foreign Affairs Yair Lapid visited the UAE at the end of June and opened an embassy in Abu Dhabi and a consulate in Dubai.

The UAE’s decision to establish relations with Israel sparked Palestinian anger, as it ended decades of Arab consensus that there should be no normalisation of relations without a comprehensive and lasting peace between Israel and the Palestinians.

After the UAE agreement, Israel normalised relations with Bahrain, Morocco, and Sudan, also as part of the Abraham Agreements.