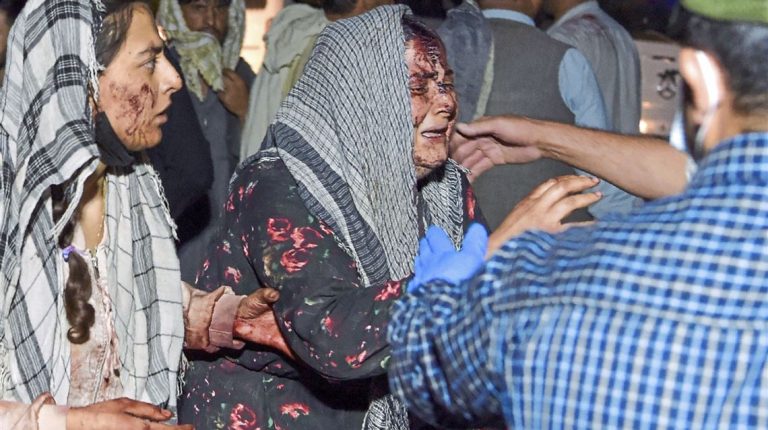 More than 100 people were killed, including at least 90 Afghans and 13 US service members and 90 Afghans in the attack at the Kabul airport in Afghanistan earlier in the day.
Kenneth McKenzie, commander of the U.S. Central Command, told reporters during a press conference at the Defense Department that two bomb attacks happened in the morning in the Afghan capital, one at the Abbey Gate of the Hamid Karzai International Airport, which was followed by another one at the adjacent Baron Hotel.

“At this time, we know that 12 U.S. service members have been killed in the attack, and 15 more service members have been injured,” said McKenzie.
The attacks marked one of the deadliest days in Afghanistan for U.S. forces.
McKenzie said the attack at the Abbey Gate that caused U.S. casualties involved a sole suicide bomber and was followed “by a number of ISIS gunmen who opened fire on civilians and military forces,” resulting in Afghan civilian casualties as well. He said details about the Baron Hotel attack were not immediately available.
The Islamic State (ISIS) has claimed responsibility for the attacks, according to a statement from the group’s Amaq News Agency cited in multiple reports.
ISIS said in its statement that a suicide bomber “managed to reach a large gathering of translators and collaborators with the American army at ‘Baran Camp’ near Kabul Airport and detonated his explosive belt among them, killing about 60 people and wounding more than 100 others, including Taliban fighters,” according to Reuters.
At one point during the Pentagon press conference, the commander said U.S. forces currently in Afghanistan face “real” threats from terrorist groups, particularly ISIS-K, a radical affiliation of the Islamic State that the Taliban has been fighting against.
McKenzie went on to say that U.S. military officials are aware that the threat to U.S. forces posed by ISIS “is extremely real,” adding that “we believe it is their desire to continue those attacks, and we expect those attacks to continue, and we are doing everything we can to be prepared for those attacks.”
He said U.S. preparedness effort includes “reaching out to the Taliban,” whom the Unites States is continuing to coordinate with in the ongoing mission to evacuate U.S. citizens out of Afghanistan.
The evacuation mission “remains” uninterrupted by the blasts, McKenzie said. “We are still committed to flying people out up until we terminate the operations at some point towards the end of the month.”
Speaking of searching for and holding those responsible for the attacks to account, McKenzie said “we are working very hard right now to determine attribution, to determine who is associated with this cowardly attack and we’re prepared to take action against them.”
President Joe Biden, who has been in the White House since the morning monitoring the situation with cabinet officials including the secretaries of state and defense, is scheduled to deliver remarks on the deadly blasts later in the afternoon.
Originally scheduled for Thursday, the president’s meeting with Israel’s prime minister has been rescheduled for Friday, the White House said.
The attacks came as the United States has been scrambling to evacuate Americans and its Afghan partners from the country since the Taliban entered Kabul on Aug. 15.