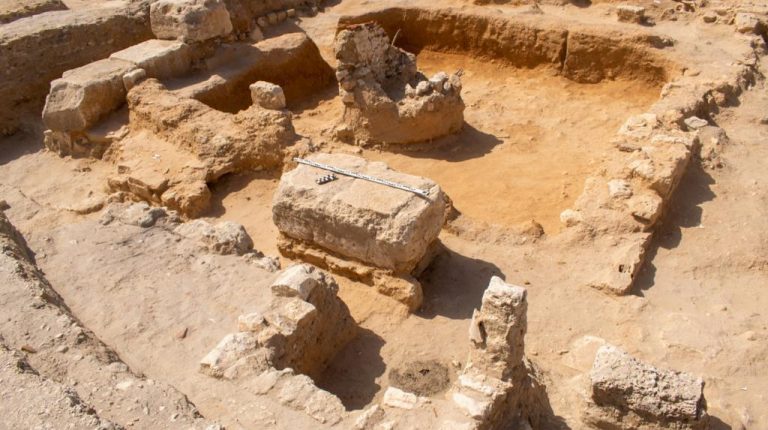 An Egyptian archaeological mission has discovered remains of a residential and commercial suburb from the Greek and Roman eras, during excavations in the Shatby area, Alexandria.

Mostafa Waziri, Secretary-General of the Supreme Council of Antiquities, said this discovery shed the light on the various activities that were carried out at the outer walls of the Egyptian capital in the Greek and Roman eras, which included resting places for travelers and visitors until obtaining the necessary permits to enter the city. It also included places for evaluating taxes on goods imported to the city from the east.

Waziri confirmed that the preliminary studies that were carried out on the remains showed that it consisted of a main street perpendicular to the sub-streets, all linked to a sewage network. He added that this suburb was used for a long period from the 2nd Century B.C to the 4th Century A.D.

Ayman Ashmawy, Head of the Egyptian Antiquities Sector at the Supreme Council of Antiquities, indicated that the mission discovered a number of water wells, in addition to a huge network of tunnel cisterns covered with a layer of pink mortar to store water from wells, rain, and flood for use in dry seasons. There were over 40 wells and cisterns in the area. In addition, a number of pottery vessels, lamps, and some statues were found, which indicates the high population density of this suburb.

Nadia Khader, head of the Central Department of Antiquities of Lower Egypt, said that the remains of a cabin containing a basin were also discovered that may have been dedicated to the two goddesses “Athena” and “Dimitra”, who were known as two chapels for hunting and fishermen, and fragments of statues of each were also found. In addition, remains of a room were found next to the cabin. It contained a group of small ovens that were used for burning sacrifices and cooking food for those in charge of the cabin. The mission also discovered remains of amphoras and small urns for storing grain.

In the same context, Khaled Abu Al-Hamad, Director General of the Antiquities of Alexandria, revealed that studies proved that the discovered suburb contained a commercial market with workshops and shops for selling votive utensils and for the manufacture and sale of statues of deities, legendary heroes, emperors, and celebrities. Molds for making these statues and a bust of alabaster were also found.

He added that a large number of remains of amphorae, amulets, metal works, nearly 700 antique coins, dishes, and utensils of various shapes and sizes, in addition to large quantities of tools associated with industrial activities such as loom weights and fishing nets, were found.

Archaeologist Ibrahim Mustafa, head of the mission, added that the archaeological finds discovered in this suburb indicate that they were closely related to the movement of incoming trade to the city and the activities of fishing and manufacturing related tools, as most of the discoveries in the statue-making workshop indicate that most of the customers of this workshop were fishermen Where the statues of deities associated with hunting were found, in addition to the statues of the legendary heroes and Alexander the Great, which were considered amulets to take care of the warriors, and the region was also associated with the sale of offerings and votive utensils that were usually presented to the deceased in their tombs in the eastern cemetery.

He added that the excavations at the site lasted for nine whole months, and the final works are currently underway to document the site using three-dimensional imaging and modern topographical lifting techniques. .