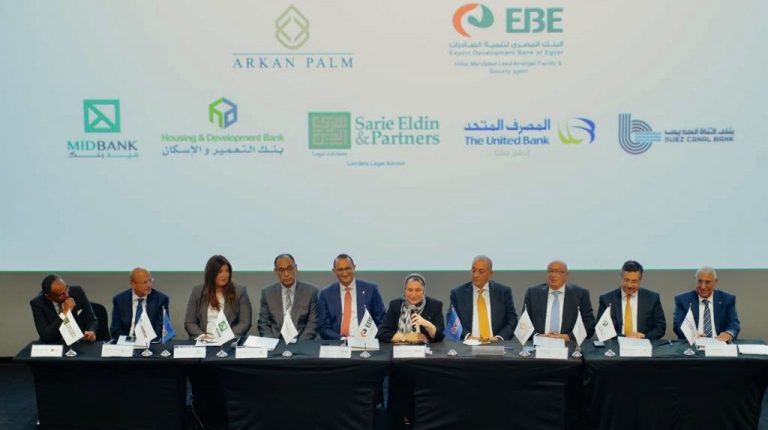 A banking alliance has concluded a long-term financing contract worth EGP 1.5bn with Arkan Palm for Real Estate Investment to finance part of the investment cost of the company’s first phase of the “205” real estate project in Sheikh Zayed City.

The contributions of each bank in the financing came as follows: EGP 650m from EBE, EGP 300m from HDB, EGP 250m from the United Bank, EGP 150m from Suez Canal Bank, and EGP 150m from MID Bank.

Mervat Sultan, Chairperson of EBE, said this cooperation is not the first among the five banks, and will not be the last in the field of corporate finance.

Hassan Ghanem, Chairperson of HDB, affirmed the bank’s constant keenness on supporting and providing the necessary financing for major projects. This positively contributes to creating an added value for society and achieving sustainable development. The bank believes in the vital role of the banking sector in supporting the national economy in all fields.

Moreover, Hussein Refaey, Chairperson and Managing Director of Suez Canal Bank, highlighted the importance of the bank’s participation in this joint financing which targets one of the important real estate development projects, implemented by one of the leading companies in the field.

Eman Abo Zeid, head of the bank credit and syndicated loans sector at MID Bank, emphasized the bank’s role in supporting various projects. This is in line with the state’s ambitious plan to attract investors and provide all facilities to support the investment sector in Egypt.

Mamdouh Badr El-Din, founder and president of Badr El-Din Group, said that the 205 project is a partnership between the New Urban Communities Authority (NUCA) and Arkan Palm. He noted that the project will act as a central service area in west Cairo, at the economic, commercial, tourist, recreational, educational, and medical levels, in cooperation with major authorities.

The first phase of the project is about 56 feddan. The project consists of residential buildings, commercial, administrative and recreational units. It also includes a medical area with an international hospital, medical clinics, a nursing home, a school and three hotels. It is located next to the Nile University and directly overlooks the 26th of July axis. It will include a 2-km-long river surrounding the residential area, separating its residential and service parts.