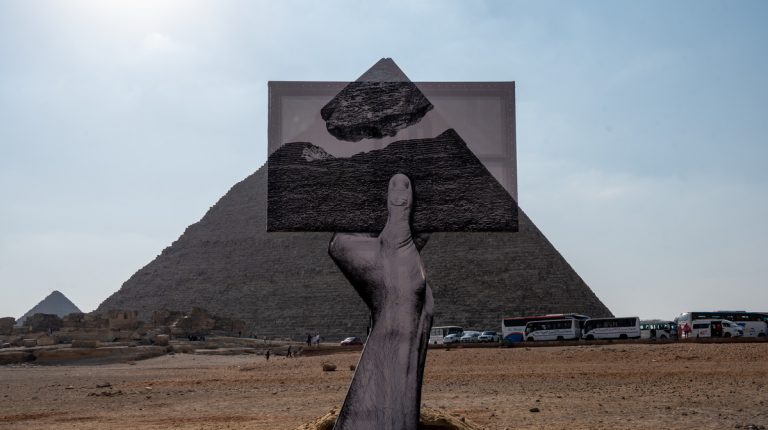 Forever Is Now is a contemporary art exhibition that brings together the work of ten international artists for the unique opportunity of contemplating the wonder of an ancient civilization through a lens created by the interests, concerns, and passions of present-day artists.

Located at the 4500-year-old UNESCO World Heritage site, the Pyramids of Giza and the surrounding plateau, the exhibition seeks to question time as a continuum that both separates and unites civilizations.

Cultural heritage is the continuity of humanity. It is not exclusive to the people living in its vicinity; rather, it is the human collective responsibility to protect and represent it. This exhibition showcases contrasting elements, the contemporary artworks and ancient artefacts, creating a dialogue that explores how the same global issues were addressed across different civilizations.

The exhibition will be running until 7 November and is open for public view. The exhibition visualizes the Pyramids as part of the artwork. In this article Daily News Egypt will present the 10 artworks the exhibition is showcasing.

Body That Rises by João Trevisan

Body That Rises is a 7m-high sculpture built from 74 wood beams taken from Egyptian railroad sleepers stacked to form a rising, square grid.

“The piece is designed for the Giza plateau, and I’d like viewers to imagine that the shape echoes the framework of a large obelisk pointing skyward,” said Trevisan

The project includes a vertically mounted structure that points to the Egyptian skies.

The Brazilian artist said that by using wood railroad sleepers, he engages Egypt’s immediate past, the train tracks laid down in the nineteenth century. And in their pure vertical form, the vertical columns of both proposals directly reference skyward-pointing obelisks of the ancient past.

Trevisan asserted that by visiting Egypt he felt the great connection between the Brazilian and Egyptian people, saying that he still cannot believe that he participated in such a huge event.

The site-specific installation, Eternity Now, embodies a timeless moment, where past, present, and future merge on the historic 4500-year-old UNESCO site of the Great Pyramids of Giza. The 30-footlong golden elliptical dome pays tribute to the deep historic legacy of ancient Egypt, known as a birthing site or ‘cradle’ of ancient culture.

The monumental sculpture is informed by the astounding volumes of knowledge acquired by the ancient Egyptians spanning the fields of astronomy, science, mythology, art, architecture, and sacred geometries. The installation’s formal geometric aspects embody the mythical shape of the sun god Ra’s glowing orb: the venerable chroma of gold being omnipresent in Egyptian symbolism and ritualism.

The dome’s elliptical curvatures reference the Eye of Horus, the mystical mind’s eye or third oculus, a form of mythological geometry symbolizing healing, protection, and rebirth. Speaking a fundamental and universal language, Eternity Now envisions a future of humanistic solidarity, reconciliation, and interconnectedness.

Here I Have Returned by Sherin Guirguis

Here I Have Returned is a large-scale, site-specific, sculptural monument and homage to the long history of women who have lifted and supported Egyptian society and culture over time. The sculpture is inspired by that an ancient Egyptian sistrum, a sacred musical instrument used by the priestesses of Isis during healing and cleansing rituals and processions. Engraved with pharaonic-inspired patterns and excerpts from a poem by Egyptian poet Doria Shafik, the piece rises from the sand, calling upon us to recall the power and labour of these women. Visitors will be invited to activate the cymbals on the sculpture creating a sense of call and response from the present to the past and back. The sculpture is embedded with the scent of Jasmine oil sourced from local Egyptian farms and celebrates the work of the women who harvest the delicate flowers.

The artwork is made from Steel, ceramic, glass, and sand, forming a movable sand glass. The artwork presents the Greek ancient symbol depicting a serpent or dragon eating its own tail. Ouroboros is the symbol of the cycle of life, death and rebirth.

The pyramids are connected to the cosmos where the globe of the earth flies and where the River Kronos closes in the Okeanos and the serpent Ouroboros consumes its tail!

After the discovery of blood circulation by William Harvey in 1628, and within each person the river of time closes, it is the blood that gives rise to the idea of a substance that turns within itself. Water, the blood of the planet that makes up Okeanos, circulates everywhere.

“The serpent, called Okeanos or Kronos, which surrounds us from all sides, is the image and guarantee of the psychological existence of man. As Jung has repeatedly pointed out, we are in the cocoon of the soul, the psyche that surrounds us on all sides, and this is the nature of what encloses us, the nature of the soul. The same idea is well known in antiquity. When Pythagoras was asked who the serpent Cronus was, he replied, the psyche of the universe,” the exhibition revealed.

Together by Lorenzo Quinn

Quinn told Daily News Egypt that “One of the reasons I chose to be a sculptor is for its longevity. The idea of possibly being able to communicate with future generations through the art I leave behind has always mesmerized me.”

“Art has the ability to cheat death and to make you immortal. When I was approached with the possibility of exhibiting one of my sculptures in front of humanity’s most glorious timeless creations, it was a dream coming true. I also realized it was a daunting task because no artist on earth today can equal the beauty and perfection of the magnificent ancient Egyptian pyramids,” he explained.

Humans are obsessed with time and yet there are places on earth where time stands still. COVID-19 has frozen time temporarily in the way we interact with each other. This relationship between human-time and earth-time is made even more relative at the site of the Great Pyramids of Giza where time is frozen.

“There is a strong desire to unfreeze our time during which we have longed for that human touch while the world came together under a single umbrella. We missed an essential part of what makes us human. Together wishes to represent that timeless human emotional journey in the place on earth where time has become relative as a testimonial to living the moment,” he confirmed.

Not built to navigate earthly waters, the sun boat, or solar barque, was carefully constructed to carry the soul of the pharaoh and the justified through to the heavens. It was the vessel gliding between two worlds, able to pass through the liminal space dividing, yet connecting two modes of existence. According to ancient Egyptian belief, barque took the human soul into the realm of the gods through the same divide the gods themselves used to travel back and forth from the world of the living. This oneness between two realms, divided, yet connected through liminal space. It is not dissimilar from what Ibn Arabi would later describe as the barzakh. The artwork is a symbol of the road the soul has to pass for eternal life.

Plan of the Path of Light by Shuster and Moseley

Behind the abstract simplicity of the forms is a matrix of symbolic angles, measures and orientations, each carefully encoded with significations inspired by the optical-geometric magic of the Great Pyramid.

Shuster said that using glass aims to reflect a future-oriented aesthetic reminiscent of technological interfaces and contemporary architectures becomes like a timeless spiritual medium, suspended between materiality and transparency; the visible and the invisible.

Cox told Daily News Egypt that “a theme in my sculpture for many years was inspired by the Tombs of the Apis Bulls at Saqqara.” These massive monolithic granite boxes fitted in with Cox’ minimalist aesthetic; however, their power was layered with highly evocative meaning.

Contemporary industrial processing enabled Cox, here in Cairo, to devise a method of producing sarcophagal forms of great size that exhibited the magnificence of Egyptian stone initially from the Eastern Mountains that were the source of rare porphyry and breccia.

This new work was directed at an engagement with Chephren that began some 15 years ago in a quest for the source of the stone of his famous funerary statue. The work realized here is not made with that material but with the material of his sarcophagus, granite from Aswan found within his pyramid.

His sculpture for Forever Is Now is a personal homage that reaches for the majesty of a sarcophagus of a scale and uniqueness appropriate to this great builder.

The concept is to construct a maze of cubes with the inscription of Ramses III engraved on the surface, similar to the hieroglyphic inscription that was found in the Zaydania area of Tayma Governorate in northern Saudi Arabia.

Greetings from Giza by JR

JR exhibits freely in the streets of the world, from the suburbs of Paris to the slums of Brazil and the streets of New York, catching the attention of people who are not typical museum visitors and pasting huge portraits of anonymous people. In his latest optical illusion, the street artist JR has ripped open the top of one of the Great Pyramids of Giza in Egypt.

AIDA’s participation represents the future’s face to face meeting with the past for the first time in Egypt, we are going towards a digital world and we were brave enough to be the first people to showcase that in Egypt across from the pyramids,” said Art D’Égypte founder Nadine Abdel Ghaffar.

AIDA presents a sculptural ‘self-portrait.’ nested within a contemporary sarcophagus, the work takes shape as a ‘mummified robot’ with three machine-like limbs, which symbol the ancient Egyptian themes of the afterlife together with the contemporary obsession with achieving immortality through the use of biotechnology in the 21st century.

AIDA’s creator Aidan Meller told Daily News Egypt “AIDA have never done such an extraordinary place to exhibit her work, and we feel very honoured that AIDA can showcase this monumental sculpture.”

Meller said that the world is changing dramatically because of technology, AIDA as a project is questioning whether technology is helping humans, explaining that technology is moving so quickly and people do not know what they are dealing with.

“We found that in ancient Egypt days they were trying to push forward to the afterlife they wanted to live forever but actually we are different today we do that maybe by technology,” added he explaining that humanity has not changed people have different technologies but they still seek to know what life is about.

The Egyptian innovative engineers behind the world’s first artist robot, Ziad Abbass and Salah Al-Abd worked on the software that allows AIDA to capture images taken by the cameras in her eyes and translate these images, enabling her to draw these pictures using her hands.