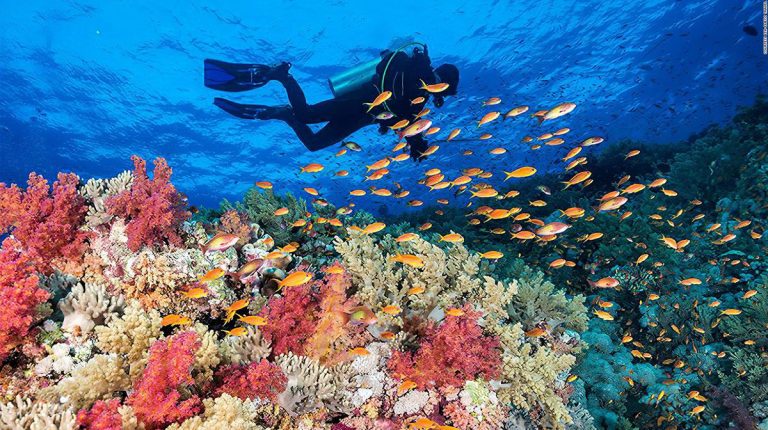 For many years the rich and diverse ecosystem of the Red Sea in Egypt, which boasts more than 1,000 species of fish, has been a major destination for lovers of water activities, such as diving, snorkelling, and glass-bottom boat trips. These activities provide Egypt with about $7bn annual revenues, of which 86% comes from coral reef tourism alone. However, scientists have expressed concern about the health of the marine environment in the Red Sea, especially coral reefs, as a report published on the sidelines of the United Nations climate negotiations, suggests they are vulnerable to the risks of climate change and rising temperatures above normal in the region. If they survive local pollution, Red Sea corals “may one day be used to re-seed parts of the world where reefs are dying,” scientists say.

Khaled Allam, an expert in the project to strengthen the organisation and management of Egypt’s natural reserves, and the former director of the Biodiversity Department of the Egyptian Ministry of Environment, explains that rising temperatures have a significant impact on the marine environment, especially coral reefs.

He told Daily News Egypt that coral reefs live and thrive in temperatures ranging between 25 °C and 40 °C, and in case the temperature exceeds this limit, the reefs are exposed to bleaching and death.

Both unsustainable human activities and climate change contribute to coral reef deterioration. Examples of unsustainable human activities include illegal and destructive fishing methods, unsustainable coastal and terrestrial developments that cause siltation and pollution in coral reef areas, and overcapacity in tourism (i.e. too many tourists), says Steve Gaines, Professor at Bren School of Environmental Science and Management, at UCSB and lead author of the study.

Researchers warn that Egypt – among a number of other coastal countries, such as Mexico, Indonesia, Maldives, Malaysia, Australia and Thailand – faces the risks of losing more than 90% of its income from coral reef tourism if countries do not take serious measures to stem the rise in global warming emissions.

Climate change is expected to cause the elimination of 74% of coral reef habitats in Egypt by 2100, according to the most pessimistic projections, and thus the country will lose an important source of income from tourism.

Although the situation of coral reefs in Egypt is not the worst among the list of countries affected by rising temperatures in the world, it is believed that it will be severely affected in terms of the economy, as Egypt ranks first in the world in terms of countries with the highest values ​​of coral reef tourism. The value of Egypt’s income from this type of tourism is estimated at $6.9bn annually.

This value could suffer a sharp decline of up to 94% of this revenue by 2100 in the worst-case scenario that predicts Egypt will lose 74% of its coral reef habitat by this date. If it loses only 12.9% of its habitat, the economic losses will reach only 39.4%. The extent of the loss depends on the level of temperature rise.

Although other countries in the Arab region and around the world may suffer higher rates of economic losses, the study focused on Egypt because it is the highest country in the world in terms of income based on coral reef tourism.

The study relied on the greenhouse gas concentration pathway set by the Intergovernmental Panel on Climate Change (IPCC), which can be summarised as a scenario of slow killing of marine life over the next 80 years. It is estimated that by 2100, average sea levels will rise between 0.61 and 1 metre in a worst-case scenario if countries do not adhere to the terms of the Paris climate agreement.

“We developed a new model that takes into account the known effects of warming and acidification to corals and uses these predictions to inform our future projections. Our results are consistent with other global findings. What is new with our analysis is that we derived country-level effects of climate change… the unit for which decisions are made. In this way, the projections are more likely to motivate action,” says the study’s lead author.

Regarding the criticism that the study may be too pessimistic, Gaines added: “Our initial model may be simple but the results of the model are consistent with global-level predictions of climate change impacts to coral reefs. The journal Nature invited us to submit a review paper. We have improved our model for this upcoming publication by explicitly modelling key processes such as bleaching probabilities and the potential thermal adaptation of coral reefs. Even with these added parameters, our general conclusions were similar.”

The Paris Agreement – which was concluded in 2015 – obligates all 195 signatories to it, to fight the causes leading to climate change, and to reduce the temperature of the earth’s atmosphere by 1.5 °C – 2 °C, to reach pre-industrial levels.

At the end of 2018, the IPCC released a report suggesting that limiting global warming by 1.5°C would spare large numbers of people and life on earth – including marine life – the devastating effects of climate change. According to the report, which took three years to prepare, the world is heading to achieve a temperature rise of 3 °C, which is by 1.5 °C higher than the rate desired to save the planet from the devastating effects of climate change.

To limit the warming to 1.5 °C, “we need to fully eliminate our emissions of the main cause of warming: carbon-dioxide,” according to Joeri Rogelj, from the International Institute for Applied Systems Analysis explaining to Daily News Egypt that “this means that global carbon-dioxide emissions have to be brought to zero levels. This does not mean that no carbon-dioxide is produced at all. However, it means that we need to actively remove as much carbon-dioxide from the atmosphere as we are putting into it.”

Rogelj added that there are various ways and strategies to achieve this goal. “Two aspects that jump out are the need for reaching zero global carbon-dioxide emissions by roughly mid-century and a need to strongly limit energy demand by adopting efficient and sustainable lifestyles,” he said.

Coral reefs in Egypt will be the last reefs in the world exposed to death, and this is explained by the fact that the climatic zones are shifting upwards, and then the heat is transferred from the tropics to the ones above them (including Egypt), so the temperature rises sharply in the tropics and the south to the degree that it kills coral reefs, according to Khaled Allam.

“As for the northern regions, it rises in the north to a reasonable degree, and it is expected that the rise in temperatures in Egypt will remain within the permissible limits (25 to 40 degrees Celsius). However, if the scenario presented by the study materializes, and the temperature rises to higher than permissible degrees, the coral reefs in Egypt will be endangered.”

The findings of a previous study published in 2017 in the “Global Change Biology” journal, support Allam’s claim that coral reefs in Egypt are located in the most environmentally safe areas in the world. The northern Red Sea region is considered a haven for coral reefs even after they have disappeared from other places in the world; due to the unique pattern of water and the prevailing winds in the area, which contribute to tempering the heat without harming the coral reefs.

The study indicates that despite the increase in marine heat waves, the northern Red Sea region is still safe from mass bleaching, which is limited to the central and southern Red Sea, a region where coral reefs are more sensitive to changes in temperature, compared to those located in the North.

Egypt’s Minister of Environment Yasmine Fouad told Daily News Egypt that Coral reefs in Egypt will be the last coral reefs to be affected by climate change, based on many scientific studies, so it has great importance in ecotourism. “We implemented a comprehensive survey of the marine environment in the Gulf of Aqaba, in order to be able to monitor the state of the marine environment in general,” Fouad said.

In order to preserve the coral reefs in the southern Red Sea, the Environment Ministry is currently working on a strategic environmental assessment study, which takes into account the social and economic dimension. “This will ensure the preservation of the marine environment and the achievement of development,” the minister noted.

The marine survey aims to build an ecological information base for the state of natural habitats in the entire coast of the Gulf of Aqaba and their response to the pressures and natural and human threats on them, to benefit from them in developing appropriate environmental management plans in the Gulf of Aqaba reserves and the coasts of cities overlooking the Gulf, in addition to setting future monitoring programs.

In 2019, the Reef-World Foundation and Chamber of Diving and Watersports (CDWS) called for tourists and operators to remember the actions they can take to protect the precious coral reefs in the tourist destinations in the Egyptian Red Sea shores. The foundation announced that Egypt has adopted the Green Fins environmental standards to protect its coral reefs. Green Fins is an ambitious action plan to strengthen sustainability within the marine tourism sector across Egypt.

Hisham Gabr, head of the Environment and Sustainable Tourism Committee at the Federation of Chambers of Tourism, warns of other risks other than climate change that threaten coral reefs in the Red Sea, such as overfishing and oil leakage caused by oil pipelines extending in the Gulf of Aqaba, which leads to great destruction in the habitats of coral reefs, calling on the Ministry of Environment to enforce the law and prosecute the violating oil companies that cause this leak.

Responding to Gabr’s comments, Ayman Hamada, Director of the Biodiversity Department at the Ministry of Environment, explains that the oil spill cases are dealt with by the Ministry through the Crisis and Disaster Management Department, as soon as it is known, within the limits of the ministry’s capabilities.

As for the poaching operations in the northern islands, Hamada says that it is carried out mainly by the local population in the area, who are difficult for the ministry to prevent from fishing, “but in the mating seasons the ministry runs patrols to follow up, monitor and prevent violations.”

Article 28 of the Environmental Protection Law and Article 102 of the Law for the Protection of Nature Reserves prohibit encroachment on marine organisms and coral reefs, whether by breaking them or trading them, and the penalty for those who commit these violations is six months in prison and a fine of EGP 5,000 – 50,000, in addition to paying the value of the environmental damages to the reserves.

Hamada explains that the measure that the ministry can take to protect coral reefs is to declare their areas natural reserves, adding that natural reserves cover 64% of the total coral reef environment in Egypt, a percentage that is planned to increase to 82% in future reserves.

“There is a huge incentive for Egypt to champion global reductions in GHG emissions given the magnitude of potential negative impacts of climate change to Egypt’s coastal ecosystems. At the local level, improving coral reef resilience by protecting coral reefs from other human impacts would prevent an abrupt reduction in coral reef tourism values,” said Gaines, as he noted that future planning will be needed to diversify tourism activities to lessen the impacts of climate change on people’s livelihoods and develop programs to facilitate potential livelihood transitions.