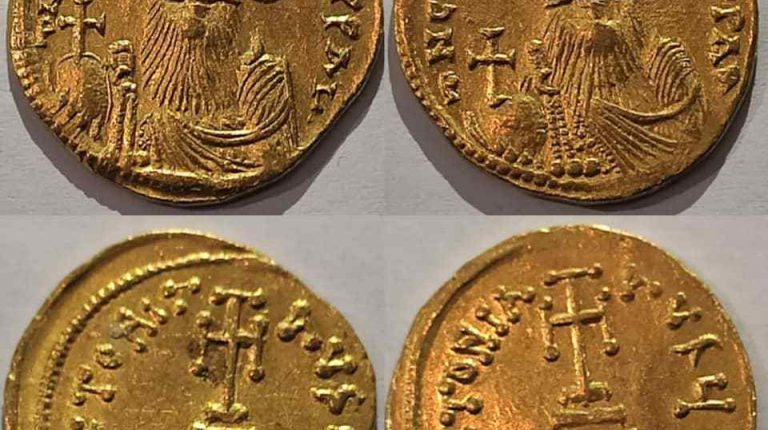 Egypt has seized nine coins dating back to different historical eras, as well as a brass candlestick from the era of Khedive Ismail, before being smuggled out of the country.

The archaeological unit at Cairo International Airport found the artefacts in the luggage of two passengers traveling abroad, according to Secretary-General of the Supreme Council of Antiquities Mostafa Waziri.

The coins and candlestick were examined and proved to be antiquities, which made them subject to the Antiquities Protection Law No 117 of 1983 and its amendments, that means referring the entire matter to the Public Prosecution.

The head of the Central Administration of Ports and Archaeological Units in Egypt, Hamdi Hammam, indicated that the coins included three gold coins from the Byzantine era.

Two coins have a bust of the Roman Emperor Constantine II wearing a crown and holding a cross, surrounded by Byzantine inscriptions on one side. The other side of the coins feature an amphitheatre surmounted by a cross and surrounded by inscriptions.

The third gold coin has a full picture of Byzantine Emperor Heraclius with his sons, and it bears on the back an amphitheatre topped by a cross and surrounded by Byzantine inscriptions.

Also, six coins made of metal that date back to the Ptolemaic era were seized. All of the coins bear a bust of the god Zeus, an eagle clasping its wings, a horn of good deeds, and inscriptions in the ancient Greek language.