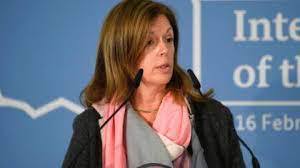 Williams said in an interview with CNN: “The UN is working with Libyan institutions to get the electoral process back on track as soon as possible.”

“These institutions face a crisis in their legitimacy that can only be resolved through elections leading to the democratic election of a president and a government,” she said.

Williams stressed that the UN is not qualified to determine who can run in the Libyan elections, noting that this is a “Libyan decision.”

She expressed confidence in the possibility of continuing to respond to the voices of Libyans who want to go to the polls and want to end this long transitional period, stressing that the elections will take Libya to a more permanent future, especially as it is currently living in chaos.

US Ambassador and Special Envoy to Libya Richard Norland said on Tuesday that Washington supports efforts to regain the momentum of Libya’s presidential and parliamentary elections.

“The United States supports efforts to regain momentum for Libya’s presidential and parliamentary elections after they were postponed in December,” Norland said.

“My country supports a process that will give Libyans the strong, united, sovereign, and elected government they deserve.”

All this comes after a state of uncertainty over the fate of the political process in the country in light of the failure to conduct the presidential and parliamentary elections on the agreed upon 24 December due date.