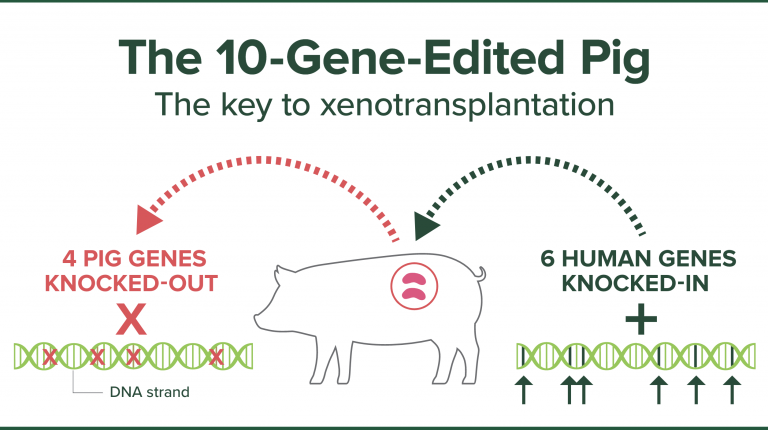 Researchers at the University of Alabama’s School of Medicine have announced the first research on a clinical-grade, genetically modified pig kidney transplant into a brain-dead human to replace the recipient’s original kidney. These positive results illustrate how pig organ transplantation can address the organ shortage crisis worldwide.

Researchers say that this genetic modification in pig kidneys was done to prevent rejection from the human body’s immune system. The kidneys were not rejected during the 77 hours of the experiment, which was conducted on September 30. The kidneys came from the same genetically modified pig breed from which a new heart was transplanted to patient David Bennett, on 7 September.

“The promise for the future is tremendous. Our study demonstrated how pig-to-human kidney transplantation can be implemented in a safe and systematic fashion in order to help thousands and not just one specific individual. In other words, we were able to test our xenotransplant system,” says Dr Jayme Locke, Professor of Surgery at the University of Alabama at Birmingham and the first author of the paper.

“Specifically, we were able to procure kidneys from a donor 10GE pig at a pathogen-free facility (use of a clinical-grade pig designed for human transplantation), package and transport the pig kidneys to the recipient hospital and transplant the organs. In essence, we replicated every single step in the transplant process and demonstrated this was feasible using a pig donor source. We also developed and tested a pig-to-human specific flow crossmatch that determined tissue compatibility prior to transplantation.”

She further explained in statements to Daily News Egypt that this is a necessary and important step as no such test existed prior to their study, noting that pre-transplant crossmatch testing is a federal regulatory requirement for human-to-human transplantation. The team also demonstrated that no disease transmission of pig endogenous retroviruses occurred.

This study suggests that pig kidney xenotransplantation can happen safely and is achievable. Importantly, by establishing human brain death as a viable pre-clinical human model, the researchers were able to test some endpoints without risking a living human being.

These endpoints include the xenotransplant process — from source animal procurement to transplant; the establishment of a novel flow crossmatch and confirmation of its accuracy by demonstrating hyperacute rejection did not occur; the testing porcine vasculature in the context of human systolic blood pressure; the demonstration that no pig endogenous retroviruses were transmitted; and the demonstration that no pig cells ended up in circulation (e.g. no chimerism; no graft vs. host disease).