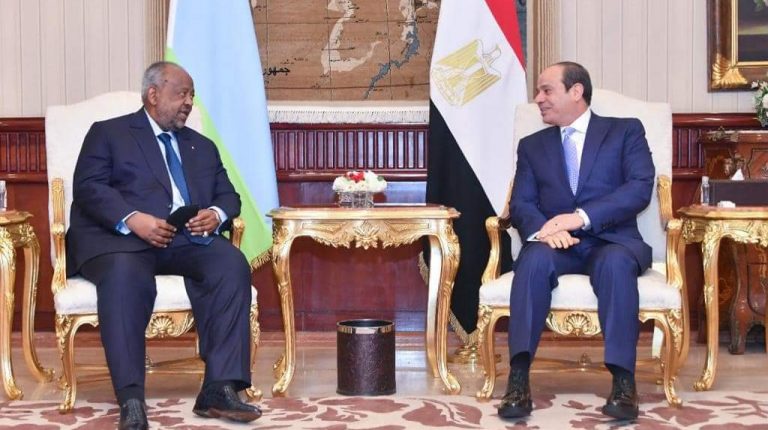 Egypt and Djibouti have agreed to cooperate to combat extremism and spread the moderate values of Islam through religious institutions, especially Al-Azhar.

Egypt’s President Abdel Fattah Al-Sisi received on Monday his Djiboutian counterpart Ismail Omar Guelleh at Al-Ittihadiya Palace. The visit followed up the progress made in bilateral cooperation projects between the two countries.

Both sides affirmed the importance of cooperation in supporting mutual investments and the contribution of Egyptian companies to economic development efforts in Djibouti.

They also stressed the necessity of increasing the volume of trade exchange between the two countries and efforts to establish an Egyptian logistic zone in Djibouti, in addition to strengthening cooperation in the fields of transportation and port connectivity.

Furthermore, both leaders followed up on efforts to operate a direct flight between Cairo and Djibouti as well as cooperation in the fields of education, higher education, and health.

Al-Sisi added that this meeting reconfirmed Egypt’s commitment to continuing its support for Djibouti and working to provide training and capacity-building for Djiboutian cadres.

The meeting also tackled developments regarding the Grand Ethiopian Renaissance Dam (GERD), in which Egypt asserted its keenness to reach a binding legal agreement on filling and operating the dam.

Additionally, the two presidents reviewed regional issues of mutual concern, asserting the need to intensify cooperation between Egypt and Djibouti in order to consolidate security and stability in the Red Sea region.

They also discussed Egypt’s hosting and presidency of the United Nations’ Conference of Parties on Climate Change (COP 27) in November 2022, in which Egypt will represent the aspirations of the African continent.

For his part, Guelleh said that he had constructive and fruitful talks with President Al-Sisi, where the two sides discussed ways to strengthen and develop bilateral relations at all levels, in addition to exchanging views on various issues of common interest.

The President of Djibouti added that he agreed with Al-Sisi on the importance of elevating the relations of the two countries to new heights by developing cooperation frameworks in various fields, especially economic, commercial, investment, industrial, and health.

He also stressed the importance of activating cooperation to establish regional security and stability, and work to achieve integration between the two countries.