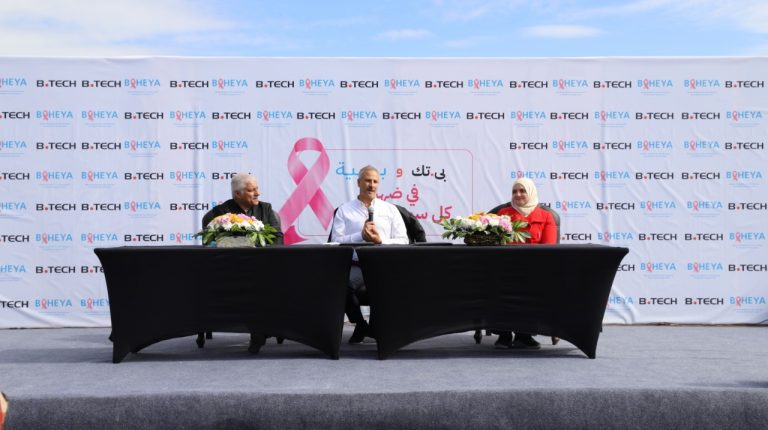 Baheya Foundation, B.TECH company signed a cooperation protocol aimed at supporting Egyptian women, which will reflect on the stability and comfort of the Egyptian family, by donating more than EGP 1.5 m to implement three rooms and sponsor the treatment of a number of cases and launch the “B.TECH and Bahya support every women”.

The launch of the “B.TECH and Bahya support every woman” is part of the company’s community initiatives, which chose for all of them the slogan “we are going to complete their joy”.

Mahmoud Khattab, Chairperson and Managing Director of B.TECH, expressed his pride with the new initiative concerned with the health of Egyptian women, praising the important role played by the Baheya Foundation for the early detection and free treatment of breast cancer for women, which helps many Egyptian women to detect the disease early, which is one of the most important factors that help in recovery.

Gilan Ahmed, Executive Director of Baheya Foundation, expressed her great happiness and pride in the presence of leading Egyptian companies that care about community work and put it on its list of priorities, to support the decent life of the Egyptian citizen in various fields, especially the health of Egyptian women and the fight against breast cancer.

“We in Baheya are proud of our great role in supporting the health of Egyptian women, and early detection and treatment of breast cancer free of charge, according to the best international standards.

“In Baheya, we are keen to access the latest scientific methods in breast cancer treatment and medical research, reduce waiting lists for women, and work on developing, establishing and equipping several departments in the hospital and opening new branches, where the first phase of Sheikh Zayed Hospital is scheduled to open  in 2023, which will enable us to receive a larger number of female warriors, as it is scheduled to be built on an area of ​​6,000 square meters, with an estimated construction size of 31,000 square meters, with a capacity to accommodate 60 beds, in addition to 6 operating rooms, recovery and care rooms, and we expect to receive 500,000 women during the year in order to reduce waiting lists.”

Regarding the B.tech and Bahya in the back of every women initiative, Khattab said: “The cooperation protocol with Baheya Hospital includes implementing an awareness campaign for early detection of breast cancer through social media platforms, the company’s various branches, and within the B.TECH School for Applied Technology over the course of the year. In addition to directing a specialized team from Baheya Hospital to educate all B.TECH employees on how to detect breast cancer early, what are the methods of treating it and how to deal with it or dealing with the patient. There will be awareness videos within the company’s branches along with a team from Baheya Hospital in some B.TECH branches to help and educate customers.

“We always strive to contribute effectively to social responsibility projects for the social, economic and health development of the community by launching a number of initiatives that contribute to this, and we look forward to launching more of them during the current year,” he concluded.