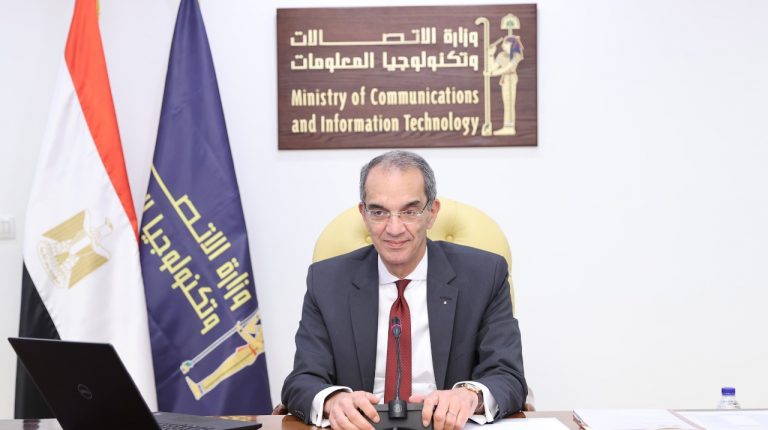 Minister of Communications and Information Technology Amr Talaat affirmed that, as part of transforming Egypt into an integrated digital society, more than 125 government services have been launched on the Digital Egypt platform.

He also revealed that Egypt’s ranking in average ADSL speed has advanced to occupy the first place in Africa, according to Ookla’s report, pointing out that Egypt was among the high-performing countries in the indicator of the development of government technologies for the year 2020 as well as among the top 10 developing countries in digital inclusion.

This came during his participation in a session organised by the Arab Euro-Mediterranean Organisation for Economic Cooperation via the Internet under the title ‘Digitizing the Economy: Opportunities Across Sectors and Regions.’

Amr Mahfouz, the CEO of the Information Technology Industry Development Agency (ITIDA), and members of the Euro-Mediterranean Organisation for Economic Cooperation participated in the session.

During the meeting, Talaat reviewed Egypt’s digital strategy and its executive status as per the ministry.

He explained the ministry’s plan to build digital capabilities, which is being implemented according to a hierarchical approach that gradually starts from providing programmes for training in the basics in ICT sciences, then specialised training in technology schools, then providing training through technological institutes, and graduating to reach an academic bachelor’s and master’s degree through the Egyptian University of Informatics.

Trainees can progress to programmes to hone the skills of graduates and then be awarded a practical master’s degree through the Digital Egypt Builders Initiative.

He stressed that he aims to train 200,000 trainees in the current fiscal year with investments of $1.1bn.

Furthermore, he pointed out that Egypt ranked first in the Middle East and Africa, and 15th in the world in the ‘Global Service Locations Index’ issued by Kearney global consultancy for the year 2021.

Egypt exports digital services to about 100 destinations globally in 20 languages ​​through more than 85,000 employees in the field of cross-border services.

He explained that the growth rate of investments in start-up companies amounted to more than 170%.

Talaat also referred to the programmes and projects that are being implemented to motivate young people to engage in digital innovation and entrepreneurship, the most important of which is the implementation of a project to spread Egypt’s digital innovation centres in the governorates; pointing to the ministry’s efforts to establish a Knowledge City in the New Administrative Capital (NAC) to serve as an integrated information society.

Additionally, he explained the role of his ministry in the Decent Life Presidential Initiative by raising the efficiency of the information infrastructure of the initiative’s villages and spreading digital culture and digital economic empowerment of citizens in these villages, referring to the plan to develop the Egyptian postal service to expand the number of its branches throughout the country while working in parallel to automate its work and provide new types of services.

With regard to the establishment and management of smart cities in Egypt; the minister indicated that 17 smart cities are being established, the most important of which is the NAC, which is being equipped with the latest smart solutions in cooperation with partners from all countries. He stressed that this matter is a priority on the state’s agenda and there are many opportunities for partnership with German companies in this field.

It is worth noting that the Euro-Mediterranean Economic Cooperation Organisation is a regional institution that aims to strengthen cooperation between Germany, Europe, the Mediterranean region, and the Middle East. It is a platform to connect decision-makers in the fields of economics, politics, and academics from a variety of countries and sectors.

It also provides business opportunities for small and medium enterprises in addition to promoting the creation of sustainable partnerships.