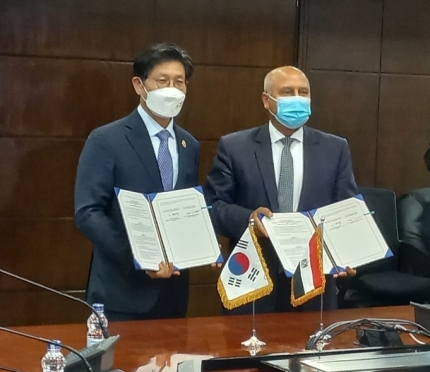 Moreover, the two ministers discussed strengthening cooperation and financing a plan for the localisation project of Cairo’s second and third metro lines.

He pointed out that this will allow Korean companies with a high level of technologies to take part in tangible cooperation projects in various fields including establishing smart cities and smart transportation systems.

Noh added that the success story of bilateral cooperation between the two countries could lead to a mutual development cooperation model and a partnership in a third country.

Furthermore, the Korean minister, based on the presidential summit in January, expressed Korea’s interest in contributing to Egypt’s 2030 Vision for national development through cooperation projects in the areas of ICT, sustainable energy, science, technology, and higher education, in which Korea has strong advantages.

For his part, Kamel stressed that Korea, with its advances and high technology, is Egypt’s best partner in a number of sectors and expressed his hope to learn from Korea’s expertise across various fields and develop further areas of cooperation.

Korean Ambassador Hong Jin-Wook said that Noh’s visit comes as a follow up on Korean President Moon Jae-in’s visit to Egypt in January. Hong also expressed hope to further strengthen bilateral relations with Egypt, which enjoys strategic geopolitical importance and has a strong economy and an attractive investment climate.