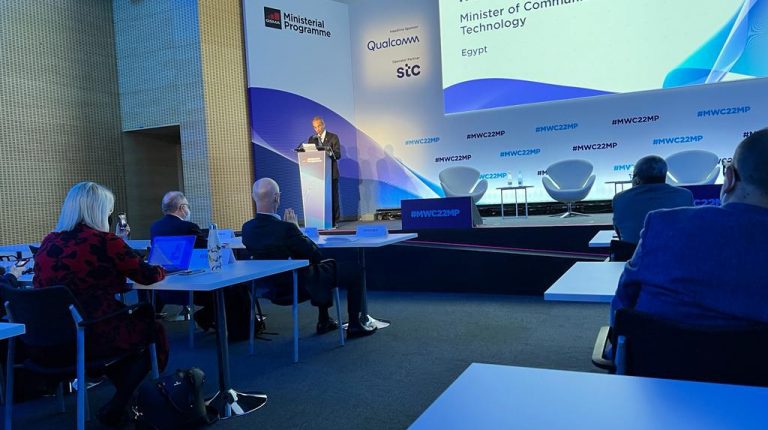 Barcelona-Minister of Communications and Information Technology Amr Talaat affirmed that the ICT sector creates innovative solutions to mitigate the repercussions of climate change and build a green economy.

This came during his participation in a session on mechanisms for building digital policies to deal with the challenges of climate change within the activities of the Mobile World Congress (MWC) in Barcelona, ​​Spain.

On the sidelines of the MWC, Talaat met with Manish Vyas; the Head of Communications, Media, and Entertainment Solutions and CEO of Network Services at Tech Mahindra, which is one of the 15 best IT service providers in the world.

The meeting discussed ways of cooperating with the company in the field of outsourcing.

Tech Mahindra is an Indian multinational subsidiary of the Mahindra Group and is one of the fastest growing brands.

The meeting witnessed a review of Egypt’s 2022-2026 digital strategy for the outsourcing industry, which aims to accelerate the growth of the knowledge economy and is based on developing digital skills and language capabilities of youths, developing the ecosystem, and enhancing Egypt’s international position in the target markets.

The minister also highlighted the capabilities and advantages of Egypt as a distinguished regional and global centre in the outsourcing services industry and the incentives provided for foreign direct investment within the framework of the strategy.

An official visit has also been planned for the company’s delegation to Egypt that is scheduled for March to get acquainted closely with a group of success stories of multinational technology companies working in the field of cross-border services in Egypt and to discover the opportunities available in the country’s market.

Talaat pointed out that the communications ministry and its affiliates play an important role in setting green standards with the international community.

The ministry participates as a member of Study Committee 5 within the International Telecommunication Union, which works to set standards for environmental compliance, the recycling economy, climate change mitigation and adaptation, and green procurement, in addition to measuring the carbon footprint of the ICT products and services.

He called on the leaders of the ICT industry to partner and work towards a greener and more sustainable future.

He added that the communications infrastructure is being developed in more than 4,500 villages over a three-year period as part of the Decent Life Presidential Initiative, which targets approximately 58% of the Egyptian population, stressing the state’s keenness to provide communication and internet tools to the villagers to enable them to develop.

Talaat also stressed that Egypt has an ambitious plan for urban expansion by building 40 new cities over the next two decades, as it began developing the national strategy for smart and sustainable cities, which includes plans to equip new cities based on environmentally friendly infrastructure and technologies, while working in parallel on the gradual transformation of older cities to greener and more sustainable models.

He added that Egypt is one of the main hubs for crossing international submarine cables that transmit data through a network of 4,000 km in Egypt. The Egyptian state has great potential in the data centre industry that is established in accordance with green environmental standards and regulations. Data centres contribute about 2% of global greenhouse gas emissions, which makes the transition to a green data centre a necessity.

The minister explained that a participatory system of mobile towers is being adopted that reduces carbon emissions as well as the deployment of solar panels in communication sites; pointing to the ministry’s interest in the file of rational management to deal with e-waste, where joint projects are implemented with international bodies to support this trend in both the government and the private sector, and to enable entrepreneurs, start-ups, and small companies to take an active role in this regard.

He noted that according to the Global Electronic Sustainability Initiative (GeSI), the ICT has the potential to reduce global greenhouse gas emissions by 20% by 2030.

This can be achieved by helping businesses and consumers to maximise usage and save energy. He explained that the projects of the communications ministry use modern technologies in adapting to climate change, including guiding farmers on ways to responsibly use water and other resources through various applications, such as the ‘Hudhud’ application, the smart assistant to the farmer, and the ‘Kenana’ online portal.

This is in addition to implementing a number of projects to manage groundwater, cooperate with the Egyptian Meteorological Authority to forecast and manage flash flood paths and mitigate their effects, in addition to working on building a weather forecast system supported by artificial intelligence and providing severe weather alerts based on geographical location.

He noted that the ministry is evaluating a number of projects aiming to enable environmental sustainability, including using artificial intelligence to improve energy use based on a study of consumption as well as improving traffic and transportation to reduce carbon emissions.

Talaat also affirmed the Egyptian government’s keenness to host the upcoming Conference of Parties to the United Nations Convention on Climate Change (COP 27) in Sharm El-Sheikh in November in order to build on the conclusions of the COP 26, the Glasgow Climate Charter, and the Paris Climate Agreement.