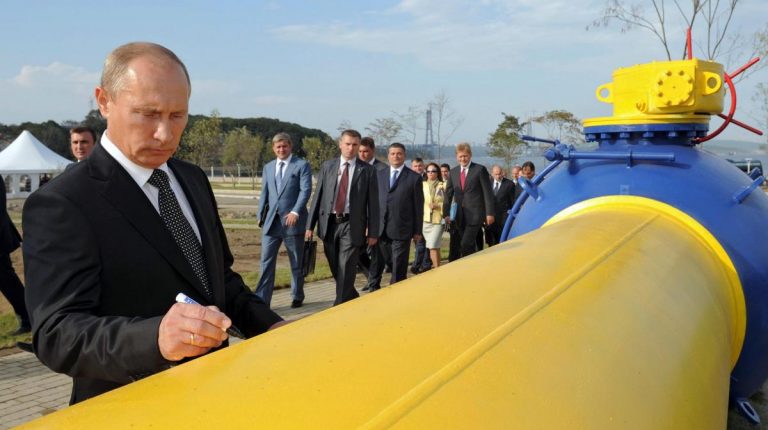 Reuters – Despite the cascade of Western sanctions on Russia in response to its offensive in Ukraine, one thing hasn’t been affected so far – flows of Russian gas to Europe and the funds to pay for it.

Europe remains heavily dependent on Russian gas, which supplies around 40% of its needs, and is now worried that Russian President Vladimir Putin could use it to retaliate against sanctions. But Russia, which pumps gas through pipelines that cross Ukraine and other eastern European nations, requires the revenue, perhaps now more than ever.

What is the status of this mutual dependency?

HAS THERE BEEN ANY INTERRUPTION OF GAS SUPPLIES BECAUSE OF THE UKRAINE WAR?

So far not. Russia has been delivering gas to Europe to fulfill long-term contracts, according to buyers such as Uniper and RWE in Germany and traders in the Baltics.

But since last year, Russia has only been delivering the contractual volumes, saying no buyer had asked for additional volumes and that it didn’t have much spare gas itself. This has caused prices to spike because, in the past, Russia was usually delivering extra supplies. Prices also rose because other major producers struggled to deliver more gas amid very tight global markets and rising demand due to economic recovery from the pandemic.

HAS RUSSIAN GAS THAT FLOWS THROUGH UKRAINE TO EUROPE BEEN AFFECTED BY THE WAR?

No. Volumes of Russian gas delivered at the Slovakian border, after a roughly 800-mile journey through Ukraine, have, in fact, increased since the war began, according to data from Slovak gas transport company Eustream. Gas prices on the spot market have risen sharply, making Russian gas, which is largely sold through long-term contracts, more attractive to European buyers, analysts say.

Ukraine has banned some cross-border gas trading activities but has said it wouldn’t restrict the flow of Russian gas to Europe. Inside Ukraine, however, some secondary distribution pipelines for domestic consumption have suffered damage due to shelling and air strikes, according to the country’s gas pipeline operator, Gas TSO of Ukraine. In a statement, it said it was forced to halt supply to several regions, leaving hundreds of thousands of inhabitants without gas.

WHAT WILL HAPPEN TO THE NORD STREAM 2 RUSSIAN GAS PIPELINE PROJECT NOW THAT GERMANY HAS FROZEN IT?

Courthouses are likely the next stop for the promoters of Nord Stream 2, who may try to challenge the decision last month by Germany’s Chancellor Olaf Scholz to halt certification of the pipeline. The project would have doubled the delivery capacity of the existing huge undersea Nord Stream 1 gas pipeline from Russia to Germany. The $11 billion Nord Stream 2 project is a conduit running offshore along the same path between Russia and Germany. It is finished, but unless it is certified by Germany, it is possible it will remain unused, rusting slowly in the Baltic Sea and turning into a loss for its owner, Russia’s energy giant Gazprom, as well as the five Western energy companies that shouldered its costs.

Resurrecting the project would require rebuilding trust between its main sponsors – the Russian and German governments – something German officials deem unlikely as long as Putin remains in the Kremlin. In what would amount to a dramatic about-face, Germany’s Economy Ministry is working on a new assessment of the pipeline that may conclude that it endangers, rather than contributes to, the security of German energy supply.

WHAT ABOUT NORD STREAM 1? WHY HASN’T THAT PIPELINE PROJECT BEEN TARGETED BY SANCTIONS OR TURNED OFF?

Nord Stream 1, which has been delivering Russian gas for more than a decade, is currently Germany’s gas lifeline. The lion’s share of Russian gas comes into the country via that pipeline, so halting it would mark a serious blow to the German economy. Nord Stream 2 was different because it wasn’t in service yet and so far, Germany hasn’t needed additional gas supplies. Gazprom has argued it wants to build Nord Stream 2 to supply all of Germany’s gas directly under the Baltic Sea rather than dealing with transit pipelines via Poland and Ukraine. It has repeatedly accused Ukraine of stealing gas, which Kyiv has denied.

WESTERN NATIONS HAVE IMPOSED SANCTIONS ON RUSSIA OVER UKRAINE. WHY HASN’T RUSSIA RETALIATED BY CUTTING OFF GAS SHIPMENTS TO THE WEST?

The Kremlin has said it will respond to Western sanctions but hasn’t said how. But it has no immediate self-interest in cutting off gas shipments as this would deprive Russia of much needed revenue and would accelerate moves by Western countries to wean themselves off Russian gas. For decades, the Kremlin has sought to cast itself as a reliable gas supplier. Late last year, when Belarus threatened to cut off pipelines running through its territory in response to Western sanctions against Minsk, Moscow rushed to reassure its European clients that it would meet all present and future delivery commitments.

IS GERMANY CONSIDERING EXTENDING THE LIFE OF SOME OF ITS NUCLEAR PLANTS?

Germany’s three remaining nuclear reactors, which supplied 12% of its gross electricity generation in 2021, are slated to be shut down this year. The country had decided to abandon nuclear power following Japan’s 2011 Fukushima disaster.

The technical, legal and political hurdles would be formidable and nuclear power wouldn’t be able to fully replace Russian gas. Extending the operation of nuclear plants would require the German parliament to change existing law which would face opposition from the Greens party.

Two German nuclear plant operators – E.ON and RWE – have expressed skepticism about running them beyond Dec. 31, telling Reuters their plants’ fuel would be used up by the end of 2022. However, another operator, EnBW, has said it was open to examining the possibility.

In the meantime, Germany is considering ways to reduce its dependency on Russian gas, including by accelerating construction of terminals to receive non-Russian liquefied natural gas, or LNG, and postponing the decommissioning of coal-fired power plants that had been scheduled for closure. In recent months it has increased its use of coal.

*This story is edited by Daily News Egypt

All options on the table, UK PM says when asked about Russian oil ban