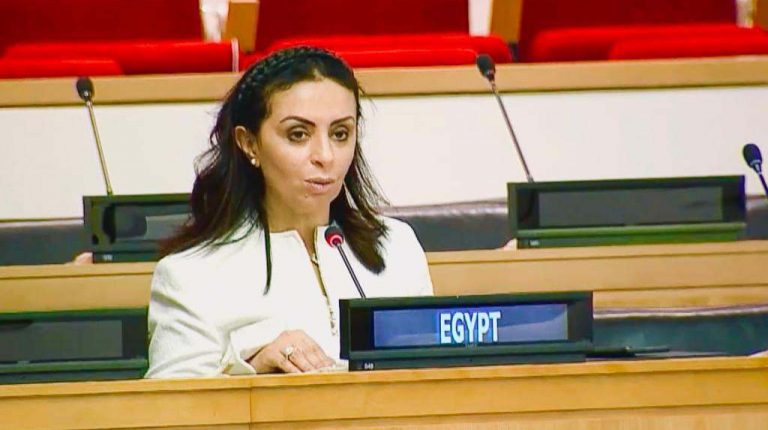 Maya Morsy, President of the National Council for Women (NCW), delivered a speech during the 66th session of the United Nations Commission on the Status of Women (CSW66) on “achieving gender equality and the empowerment of all women and girls in the context of climate change, environmental, and disaster risk reduction policies and programmes.”

The event is running from 9 to 25 March.

During the opening, Morsy presented “Egypt’s Global Perspective: Women, Environment, and Climate Change”, which is based on 7 actionable areas, which are promoting gender sensitive perspectives within adaptation, mitigation, and responses, strengthening Women’s Voice and their Meaningful Participation in environmental governance, leveraging opportunities for women within the just environmental transition to the green economy and green consumption habits and within blue economy in the context of achieving sustainable development, tackling differential health and social implications of environmental issues on women, promoting Educational and Behavioral Change on women and climate change, promoting knowledge, data generation and analysis on women and climate change and applying women-specific perspectives in financing for climate action.

Morsy affirmed the commitment of the Egyptian Government to continue its tireless efforts to address climate change along with empowering Egyptian women in various fields.

She stressed that Egypt is among the most affected countries by the implications of Climate Change, despite its very limited contribution to these implications.

Morsy explained that in light of the climate change’s impact on women, particularly with regard to their health, food security and decent living standards, Egypt has taken many serious measures to implement a sustainable development model.

In her Statement, Morsy added that the Egyptian government has adopted many initiatives, programs and projects to promote adaptation and mitigate the effects of climate change, while taking into account women’s empowerment: raising women’s awareness of rural initiatives and eco-friendly agriculture methods, organizing environmental camps to train women to engage in eco-friendly industries, raising awareness of the sustainable management of floods and launching an initiative to educate women about greenhouse gas emissions reduction methods.

The “Decent Life” programme was recently launched; it is the largest development program in Egypt and the world, in which considering women and their needs represent one of its main pillars. This programme also takes into account environmental dimensions and sustainability criteria and dedicates EGP 800bn to 58 million citizens, 50% of whom are women. The National Egyptian Family Development Project has also been launched. It aims at improving the quality of life of the Egyptian citizens and families, and its allocations are about EGP 2.9bn. The Egyptian Women’s Health Presidential Initiative has reached 23 million women citizens.