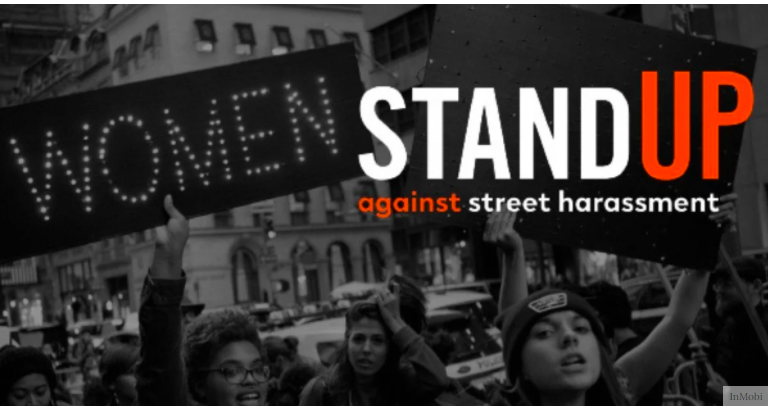 “We have got to stand up against this phenomenon!” Nahla Mokhtar, L’Oréal Egypt’s Communications & Sustainability Responsible Director, told Daily News Egypt commenting on the “Stand-Up” movement.

“We see it around us, but we always end up turning a blind eye to the situation. It could be because we fear it, or that it makes us feel uncomfortable, but the truth is no matter how it makes us feel, we must act and take a stand against it.”

Mokhtar revealed that street harassment is in fact a global phenomenon, backing up her statement with L’Oréal Paris’s research, which found that 78% of women have experienced harassment in public places.

In this context, the ‘Stand Up’ L’Oréal programme was launched in Egypt last June in collaboration with a local NGO ‘Metamen’ that was founded by Sara Aziz.

Stand Up is a training programme that helps teach safe self-defence and response mechanisms to use in case of witnessing street harassment. It teaches the 5D’s: Distract, delegate, document, direct, and delay.

Mokhtar explained that this methodology is a tool for others to safely intervene when witnessing street harassment.

“The training will be available to everyone on the website, and it takes 10-15 minutes to finish. So far, the programme has achieved positive results, as the number of trained people — both males and females — in Egypt has reached 4,000,” she added.

Collaboration with Enterpenelle during the seventh edition of the SheCan2022 Forum

The interview came on the side-lines of L’Oréal Egypt’s announcement of its collaboration with Enterpenelle during the seventh edition of SheCan2022 Forum, which is the largest event for female entrepreneurs with small- and medium-sized businesses in Egypt and the Arab World. The forum took place on March 5.

Entreprenelle is one of the most prominent centres that upholds local women at large. To further elaborate, Entreprenelle’s main objective is to provide Egyptian female entrepreneurs with training, resources, and connections with the aim of reinforcing their business.

So far, Entreprenelle has influenced over 100,000 Egyptian women and helped thousands of others in creating their projects.

During the SheCan2022 Forum, L’Oréal Egypt hosted a panel discussion on the phenomenon of harassment, moderated by TV presenter Rana Arafa and hosted by Mokhtar and Aziz.

Throughout the panel, attendees were taught, as part of the Stand Up training programme, different ways to respond safely to the phenomenon of street harassment.

Commenting on the event, Mokhtar expressed her gratitude for L’Oréal Egypt’s participation in the SheCan Forum for the second year in a row. She believes in the impactful role the forum plays in empowering women by shedding light on their different roles in achieving sustainable development and highlighting the success stories of powerful females, who lead by example.

“We highly believe in the role of Egyptian women in society. In this respect, L’Oréal Egypt has launched multiple programmes that support and empower women in various fields in hope of achieving gender equality and supporting women’s capabilities. Thus, we are pleased to expand our efforts this year, with Enterpenelle, to support more female entrepreneurs on their journey to success,” Mokhtar said.

Rania Ayman — the Founder of the SheCan Forum — explained that “the seventh edition of the Forum witnessed many surprises, and for this specific reason it was named ‘The Boldest Edition.’”

“Very soon we will be announcing new and crucial partnerships with various government entities; primarily with the Ministry of Planning and Economic Development, where we will be supporting more than 1,000 projects, with the aim of helping 100,000 women entrepreneurs in 2022.”

“Due to the coronavirus pandemic, we were able to help many females in launching their projects and businesses online. This has allowed women to maintain their financial income during this unstable time,” Ayman concluded.

This year’s edition of the SheCan Forum has encompassed a myriad of activities, workshops, and various discussions pertinent to empowering female entrepreneurs and providing them with the basic resources to succeed in implementing their projects and creative ideas.