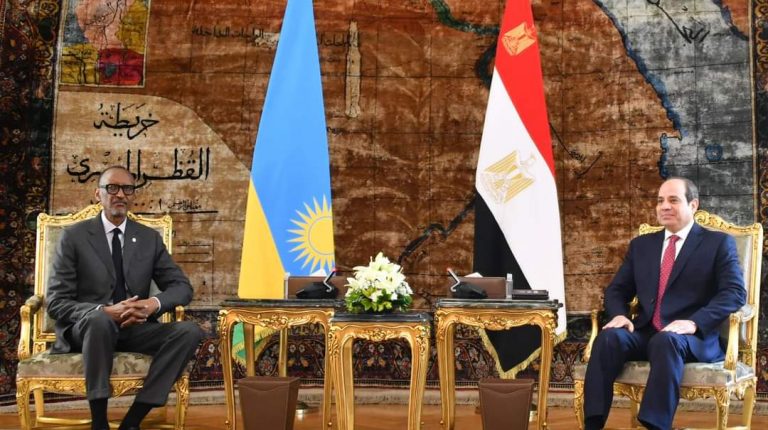 Egypt’s President Abdel Fattah Al-Sisi met with his Rwandan counterpart Paul Kagame, during the latter’s visit to Cairo on Saturday.

During the meeting, both presidents agreed to continue political consultation and coordination in order to advance bilateral relations.

They also reviewed the progress made during the past period to develop relations between the two countries at the political, economic, and security levels.

Both officials also agreed on the need to raise the rates of trade exchange, which has grown significantly during the past two years, asserting the need to exploit the huge potentials and opportunities that the two countries have for cooperation, and to advance economic partnerships.

Furthermore, they affirmed the necessity of facilitating Egyptian investments in Rwanda, confirming the role of the private sector in supporting economic cooperation between the two countries.

Regarding the process of developing cadres, Al-Sisi affirmed Egypt’s commitment to continue using its capabilities and work to provide training and build the capacity of Rwandan cadres in various fields.

The two presidents also discussed the Grand Ethiopian Renaissance Dam (GERD), with Al-Sisi re-emphasising the importance of fostering cooperation among all Nile Basin countries and asserting Egypt’s rejection of any unilateral measures that would hamper the capabilities of peoples, especially those that depend on this river as a single tributary for life and development.

Moreover, the president stressed the need to reach a legally binding agreement on filling and operating the GERD within an appropriate time frame in order to maintain regional security and stability based on the rules of international law and Security Council decisions.

The two sides also discussed issues of security and development in the African continent, including terrorism, which constitutes a real challenge to development in Africa.

In this regard, Al-Sisi reviewed Egypt’s successful efforts in the field of combating terrorism, noting that the country has established the Sahel-Sahara Centre for Combating Terrorism. He also hailed Rwanda’s efforts in the United Nations peacekeeping operations in Africa.

For his part, Kagame expressed his country’s great appreciation for the long and distinguished historical relations with Egypt, stressing Rwanda’s keenness to develop these relations in various fields, especially trade and economic cooperation.

He also asserted his country’s interest in maximising the technical support provided by Egypt to Rwandan cadres in the areas of capacity building as well as obtaining support from Egyptian companies working in the field of infrastructure, especially in light of the ambitious development agenda that Rwanda seeks to implement.

Furthermore, the Rwandan president hailed the pivotal role played by Egypt in maintaining peace and security, praising the country’s efforts to achieve stability in Africa and the Nile Basin.

Moreover, he affirmed the influential role Egypt plays in the African Union to enhance the political and economic weight of the African continent.

As part of the meeting, the two presidents witnessed the signing of a number of memoranda of understanding (MoUs) between the two countries.

The MoUs include agreements in the fields of information, communications, and postal technology, as well as diplomatic training, sports and youths, and museums.