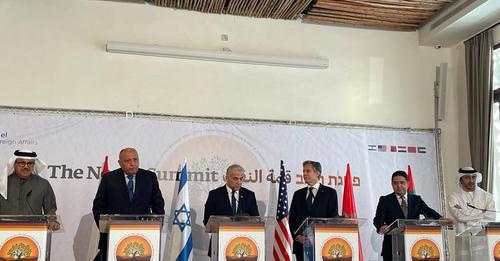 At the end of the Negev Summit in Israel, the foreign ministers of the United Arab Emirates (UAE), Egypt, Morocco, Bahrain, the United States, and Israel agreed to renounce terrorism and promote peace.

Egyptian Foreign Minister Sameh Shoukry stressed the importance of the peace process between the Palestinians and the Israelis, in order to implement the two-state solution for the establishment of a Palestinian state on the 1967 borders with East Jerusalem as its capital.

At a joint press conference with his Bahraini, Moroccan, American, Israeli and Emirati counterparts, he noted that Egypt is trying to coordinate between Israelis and Palestinians to reach a two-state solution.

Shoukry condemned any resort to violence, terrorism and incitement, stressing that the Negev summit was constructive and deep and addressed the multiple challenges in the region, pointing to constructive developments in relations between Egypt and Israel since the Camp David Agreement

He pointed out that the countries participating in the Negev summit have the resources and capabilities to face the challenges in the region with the help of our partners, and that Egypt seeks to expand and strengthen the areas of cooperation in order to achieve the interests of the region.

Israeli Foreign Minister Yair Lapid said that the meeting in Negev would not be the last, calling on everyone to participate including the Palestinians.

Lapid added: “We decided last night to turn the Negev Summit into a permanent forum, in cooperation with our closest friend — the United States — today we open the door to all the peoples of the region, including the Palestinians.”

The Israeli minister described the meeting as “the creation of history,” referring to the building of a new regional structure based on progress, technology, religious tolerance, security and intelligence cooperation.

Secretary of State Anthony Blinken stressed that America and its allies will work together to confront security challenges and threats, including Iran and its proxies.

Regarding the Israeli-Palestinian conflict, Blinken said conditions must be created for negotiations on a two-state solution.

Abdul Latif Al-Zayani, Bahrain’s Foreign Minister, called on the gathering in Negev to show the world what can be achieved through the work of the participating countries, pointing to the need to resolve the Palestinian-Israeli conflict. He called on the parties to sit together to reach a solution.

Al-Zayani noted that the Houthis continue their attacks on civilian facilities, while Hezbollah also continues its terrorist attacks, recalling the threat of Iran’s nuclear program.

Moroccan Foreign Minister Nasser Bourita said his participation in this summit in Israel proves belief in peace and the possibility of resolving the Israeli-Palestinian conflict.

UAE Minister of Foreign Affairs and International Cooperation Sheik Abdullah bin Zayed Al Nahyan said that the UAE seeks to create a different future for the children and grandchildren of our peoples.

He praised Egypt’s role, saying it “showed us a leading role in establishing peace relations with Israel, and there are great opportunities resulting from cooperation with Israel. We will win, no doubt.”

Israel hosted a “historic” summit on Sunday and Monday with the participation of US Secretary of State Anthony Blinken and the foreign ministers of Egypt, the United Arab Emirates, Morocco and Bahrain. They discussed various issues, foremost among them the Iranian threat.