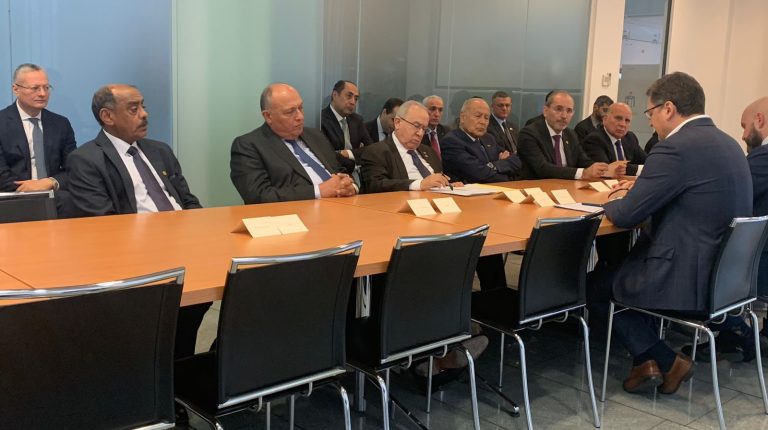 The Arab League’s (AL) ministerial contact group on the crisis in Ukraine held talks on Tuesday with Ukrainian Minister of Foreign Affairs Dmytro Kuleba in an attempt to focus efforts on reaching a peaceful solution to the Russian-Ukrainian conflict.

According to a statement issued by the AL, the group stressed during the meeting the necessity of a ceasefire and ending the crisis on the basis of international law, the UN Charter, and the principles of good neighbourliness and respect for the sovereignty and territorial integrity of states.

The Arab delegation also expressed concern at the prolongation of the crisis and its humanitarian, political, security, and economic ramifications.

Furthermore, the delegation affirmed its support for direct negotiations between Russia and Ukraine, and its readiness to support such a process with a view to reaching a cessation of military operations in preparation for a sustainable political solution to the crisis.

They also stressed that it was undertaking this effort in light of the Arab world’s outstanding relations with Russia and Ukraine and in the interest of security and peace.

Additionally, the Arab ministers stressed the importance of maintaining coordination to preserve the safety of Arab communities currently in Ukraine and to facilitate the transit of those wishing to leave to neighbouring countries.

Furthermore, the Arab delegation — headed by Algeria’s FM Ramtane Lamamra — met with the Polish FM upon their arrival in Warsaw.

During the meeting, Lamamra thanked the delegation for facilitating the mission to meet with Kuleba as well as for Polish measures to facilitate the passage of Arab citizens leaving Ukraine through Poland.