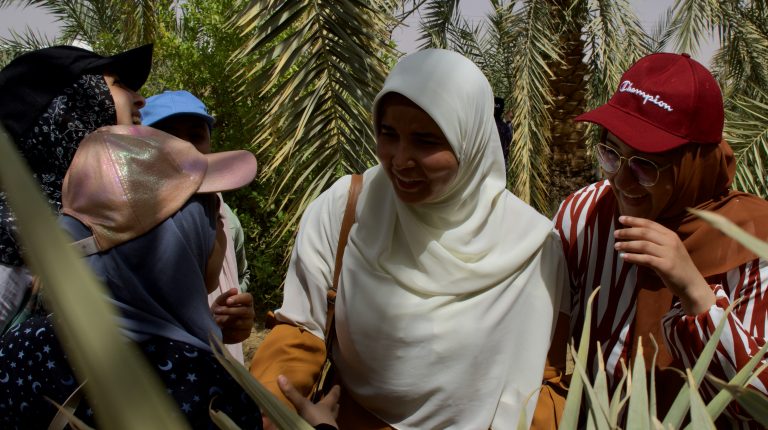 As part of an exchange programme, students from both the department of Soils and Water at the Faculty of Agriculture in Assiut University, Egypt and the Earth Sciences track at the Gladsaxe Gymnasium‎ High School in Copenhagen, Denmark, gathered for four days in a field trip in Kharga Oasis depression in Western Desert.

The trip is the first part of a two-week project organized by the Danish-Egyptian Dialogue Initiative (DEDI) to promote new and enhanced networks between Danish and Egyptian youth and academia in the discipline of geoscience at university/high school levels.

The project is designed to bring together 20 students from both countries, between the age of 18 and 25, to exchange knowledge on specific challenges and solutions in the fields of sustainable agriculture, climate change, and green transformation through organized study trips in both Egypt and Denmark.

According to DEDI, the two-week exchange aims to enable students to gain intercultural competences and learn about the people and customs of the hosting country.

As for the first part of the project, the Danish students studied solutions and challenges with agricultural development around Assiut and the New Valley and have seen the Geological Eastern Scarf of the Western Limestone Plateau, the Western Desert, Kharga Oasis, as well as the Western Dakhla Oasis.

In the second part of the project, the Egyptian students will be exposed to ecological farms in Værløse in Denmark, the Danish Hydrological Institute, Northern Jylland, the factories of the Grundfos pumps, as well as restoration of former farmlands at Skjern Stream. 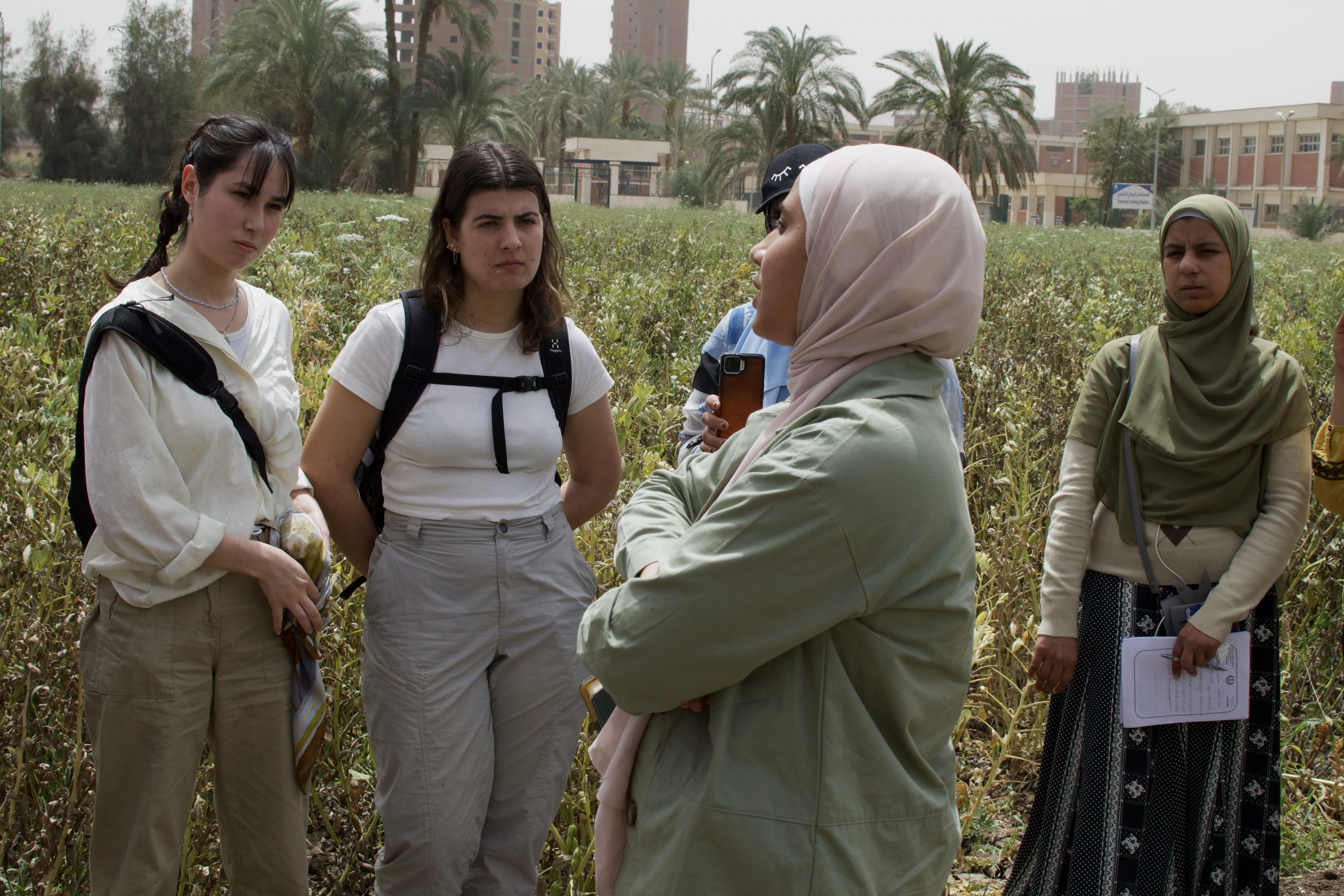 Saleh Ismail, the Head of the Department of Soils and Water at Assiut University’s Faculty of Agriculture, told Daily News Egypt that the cooperation between the Danish side and Assiut University began a long time ago, around 2004, after Mohsen A. Gameh, the professor at the department, met with Professor at Roskilde University Niels Schrøder. After that there were several mutual visits between the two professors.

In 2018, Schrøder and Magnus Limborg, the teacher of physical geography at the Gladsaxe Gymnasium, visited Assiut University. “During that visit, we discussed the possibility of organizing a student exchange programme between Roskilde and Assiut Universities, and after their return to Denmark, Schrøder suggested that this cooperation take place through DEDI.”

Ismail said: “After that, I began, as the liaison officer and head of the department, in arranging and preparing the project, which we called Sustainability and Agriculture. The aim of it was to exchange ideas between students of the two countries on a common and important topic. The topic was the aquifers bearing aquifers in the Western Desert in Egypt.”

One of the Danish students participating in the programme is Laura Haarbo (18 years old) who is studying in the third (final) grade at the Gladsaxe Gymnasium‎‏ in Denmark. “We are here to learn about Egyptian culture and geological features, like the sand and the wind, and to communicate with other Egyptian colleagues.”

About the field trip, Laura added “We already knew a lot of things about what we learnt in the oasis, but in the trip we have seen that with our eyes. It was useful for visualizing our knowledge.”

In the second part of the programme, Laura said that she believes it will be exciting for the Egyptian students who will enjoy discovering a different kind of environment and geography and of course a different culture.

About her experience in settling with an Egyptian roommate at the field trip in Kharga Oasis, Laura said “At first it was a little difficult because of the communication particularly that English is not the first language of both of them. In the beginning I was uncomfortable, but after getting to know each other and having talks, it has become better.”

“Actually, we talked about the society and school system in both Egypt and Denmark. That was really exciting to hear about her plan in the future and my plan at work that are different. My plan is to work a lot and take some free time from school and to think about what I’m going to do when I’m older and which higher education I will take.”

For her colleague, Julie Bjerrum, it is a very good idea to exchange culture but sharing the same room with a roommate from a different culture was not easy in matters of communication because of the language, “but we worked together to understand each other more.”

She added: “I think it is a very good experience to learn from a person who comes from a different culture so you can see what you have in common and what you don’t have in common, so you can learn new things. It is very exciting to get this opportunity but it is also a bit frightening.”

“Before we came here we were a bit nervous, maybe we can not talk together, or maybe we are so different that we could not talk about anything. But when we came we saw that we have a lot in common and we can easily talk together and make jokes and have fun,” Julie said.

Regarding her participation in the field trip to Egypt, she said that it was not obligatory, and she chose to join the trip because she has only been to Europe so it is her first time outside of Europe and it is also a good opportunity to learn about different cultures.

Regarding her experience in the field trip, Julie stated: “We have seen a lot of stones, geological formations but not a lot of agricultural things which might be a bit disappointing. I think it would be great if we have seen more of irrigation systems and how it works in this arid area where it is difficult to grow crops.”

Just before the visit Julie had a project on desert spread (desertification) in the Sahel region in Africa and she wrote a big project about the topic, so “I have some knowledge myself before I come here. I have read about it in the books, but it was very interesting to see it.”

Julie’s future plan is to study geography at the university, because she is really interested in people, agriculture and climate change.

Simone Yamakawa (19 years old) is also a student in the last grade at the Gladsaxe Gymnasium‎‏ in Copenhagen. She is studying the geoscience course because she is interested in climate and climate change, which is something that she wants to continue studying in the future (university). 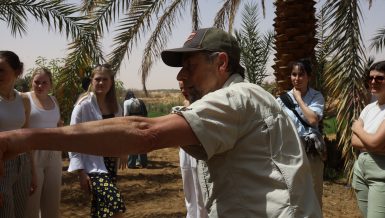 “I’m here in Egypt to gain new knowledge and exchange culture with new people,” she said. Simone believes that the trip fits her ambitions, particularly that she is not very interested in agriculture but they have seen a lot of landforms which are related to her future plans to join the Copenhagen University to study physical geography.

In the near future, Simone intends to go on a trip with her friend to do some voluntary work for 6 months with an EU programme.

“The experience of having an Egyptian roommate was stressing in the beginning because there was a difficulty in understanding each other and I was a little frustrated, but I think today (the third day of the trip) we wiped it out, we talked a lot about how to say different things in Arabic and I also taught her how to say different things in Danish. We found common ground together and we became kind of friends,” she noted.

Simone’s family welcomed her travel to Egypt and her father was jealous and wanted to join the trip. I had no concerns about coming to Egypt at all.”

Sahar Mostafa, the Teaching Assistant at the Department of Soils and Water, Assiut University, said that her participation in the programme was important for several reasons. She said: “The subject has more than one dimension. First, I will be able to see the capabilities provided by the programme that are not available to me, so it will lead me to different goals. Secondly, there is the possibility of obtaining a scholarship to study a master’s or doctorate or even a project that will help me in my work.”

She continues: “There can also be an exchange and the presence of an external supervisor in my studies, as well as an exchange of cultures, getting to know a different society and forming new relationships.”

About her Danish roommate, Sahar described her as very nice and friendly. “She had some questions about the hijab (veil) and whether I was obligated to it, and I explained to her that I am veiled because I believe in it and that it is from the Islamic religion and no one forced me to do so. We had conversations about the Qur’an, and about the lifestyles in both Denmark and Egypt. It was a very good and useful experience.”

Sahar is very excited for the next part of the programme in Denmark.

One of the Egyptian students joining the project is Martina Barzy, a student in the Department of Soils and Water at Assiut University. She described the project as an unmissable opportunity on both the academic and cultural levels. This was the first time for Marticna to communicate with foreigners directly. She also found the field visit very useful for her to apply what she studied in theory.

“The programme is very new and useful, but I was hoping for more intensification, seeing more places, such as groundwater wells, and getting a closer look at some of the areas and phenomena that we passed by bus. I had hoped that we would visit many places inside Assiut that the Danish students could be introduced to,” Martina added.

Martina and her Danish roommate became friends. “This communication was useful in learning about the cultural differences between the Egyptian and Danish peoples.”

Hasnaa Tariq (21 years old) a student in the second grade, at the Department of Soils and Water, Faculty of Agriculture, Assiut University, said that she was keen to participate in the programme to learn about a new culture and benefit from the fieldwork that the programme provides.

“The programme is very useful for me, as it will provide me with a new experience in visiting Denmark and learning about new environments and natural phenomena. It will be my first time to travel outside Egypt, which will open a new horizon for me in getting to know Danish society, which may facilitate the opportunities for me to get the opportunity to study a master’s or doctorate abroad,” she explained.

Hasnaa changed her study from languages at Al-Alsun College to agriculture, because she loves the sciences of agriculture and believes that it is very important for society.

According to Dr. Ismail, the criteria for selecting students in the programme included communication skills, knowledge of English language, interest in the subject, and willingness to travel.

He believes that they succeeded in achieving the goal of the project, and achieved communication between the students from both sides as they beat the language barrier. The students also exchanged ideas about possible solutions for environmental problems, such as sand dunes, drought, and groundwater movement.

“Teaching assistants will now have the ability to formulate a research topic. This experience will also encourage graduate students to search for master’s scholarships abroad,” he said