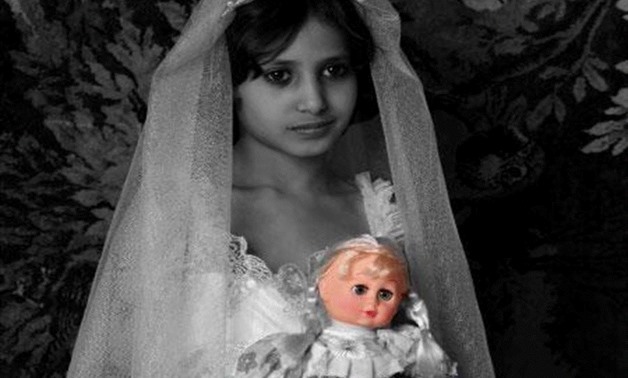 Underage marriage is a crime rooted in the norms of Egyptian society, especially in rural communities and Upper Egypt. It violates several rights of girls, damages their childhood, and causes severe health and psychological problems.
During the last period, Egypt`s government was trying to tighten the penalties on the underage marriage, but unfortunately the numbers are still high and the government is still unable to end this phenomenon completely.
As for the numbers and statistics, according to Edraak`s “Ink on paper” study that on child marriage, it revealed that the Human Development Report for the year 2021 revealed that there are 111,000 females in Egypt who were married before the legal age, and that 11% of females aged 15 to 19 years are married, in addition to that there are about 5,472 girls under 18 years old are married.
It also citied that according to a study prepared by the Central Agency for Public Mobilization and Statistics, there are 117,000 children in the age group from 10 to 17 years who are married, while the National Council for Women announced in August 2019 that the percentage of underage marriages in the age group from 15 to 19 years reached 14.4%.
Another report issued by the Central Agency for Public Mobilization and Statistics issued in 2018 revealed that there are about 139,760 women who documented their customary marriage contracts out of a total of 887,300 marriages during this year.
“Notably, according to Edraak`s study families resort to what is known as (Sunnah marriage), which is an unregistered customary marriage that takes place at the hands of the authorized person or a senior sheikh in the village/area, where the conditions for publicity are met.
The study also revealed that in many cases, the authorized person like mazoun (marriage officiant) obtains checks or promissory notes from the guardian of the girl and the husband, threatening them as not to think to report later. The guardian also obtains checks or promissory notes from the husband, which the latter retrieves as soon as the contract is officially registered.
According to Edraak, there is another way, which is to circumvent the law by issuing birth certificates to girls under the pretense of “ageing,” and giving them an age of more than eighteen.
Edraak`s study “Ink on paper” revealed that there are conflicting reports that identify the governorates with the highest rate of child marriage, sometimes placing Upper Egypt at the top of the list, and at other times specifying governorates such as Beheira, Fayoum, Daqahleya, Giza, and Sharqeya, which indicates the lack of accurate statistics on the rates of underage marriage in Egypt.
Trying to control this phenomenon on Tuesday, during its weekly meeting, the Egyptian cabinet approved on Tuesday a draft law prohibiting underage marriage.
The draft law aims to criminalise underage marriage due to children’s lack of health and mental ability to bear the consequences of marriage.
In a statement, the cabinet asserted that children are not qualified psychologically, culturally, mentally, and physically to be responsible for a family and raising children, explaining that underage marriage is an attack on childhood, which prompted legislators to intervene to prevent these harmful practices.

Deep look into the law

The draft law stipulates that a marriage contract for a person who has not reached 18 years old may not be authenticated. It also allowed those concerned to submit a request in a petition to the President of the Family Court as a judge of temporary matters to authorise the documentation of a marriage contract for a person under 18 years old in the crimes stipulated in Articles No (267), (268), and (269) of the Law Penalties, after a final guilty verdict is issued.

The draft law requires the mazoun to notify the Public Prosecution of any incident of a customary marriage in which one of the parties is a child under 18 years old at the time of marriage.

A penalty of imprisonment of no less than one year and a fine between EGP 50,000 and EGP 200,000 shall be inflicted on anyone who marries a male or female, neither of whom has reached 18 years of age at the time of marriage.

Parents who participate in marrying their daughter or son who is under 18 years of age would be deprived of the authority of guardianship over the child.

Whoever instigates this crime shall be punished with the same penalty. The child shall not be held criminally or civilly liable for this crime.

The law also punishes mazoun with no less than six months of imprisonment, a fine between EGP 20,000 and EGP 50,000, and being removed from their post, in the event they do not notify the Public Prosecution of the incident of underage marriage.

Nagwa Ramadan, Executive Director of Edraak Foundation for Development and Equality Nagwa, praised this step that will help a lot in prohibiting the child marriage rates in Egypt.

Ramdan explained to Daily News Egypt that she is optimistic about this draft law, explaining that this step means that the cabinet approves the law to enter the parliament and this is considered the tenth draft law to be presented to the parliament. So it is the first step in a long process but we are optimistic.

As Ramdan mentioned that there are a number of legislative proposals submitted by MPs or the government to criminalize the marriage of minors. They have been submitted in legislative chapters since 2017, but they have not been passed.

Ramadan pointed to that on 21 March 2021 during the Mother’s Day celebration, President Abdel Fattah Al-Sisi expressed in his speech his strong dissatisfaction with the spread of the phenomenon of minors’ marriage in Egypt and directed the House of Representatives to quickly take measures to issue a law prohibiting the marriage of underage girls, which brought back the importance of having separate legislation for this crime -temporarily- to the fore, It is not clear the reasons that stand before the Egyptian House of Representatives to approve this law, despite the repeated entry into discussions more than once in the sessions and legislative chapters with different formation and parliamentary composition.

Ramadan mentioned that Edraak published a study that traced the path of the draft laws that were submitted to the parliament during the period (2017-2021).

According to Edraak`s “Ink on paper” study that on child marriage the sequence or the stations were:-

In 2017: Representative Abla Al-Hawari submitted a draft law criminalizing the marriage of underage girls, the most prominent of which is the withdrawal of guardianship from the father if he forces his daughter to marry before she reaches the age of 18, and the imposition of penalties on the notary of the marriage, and the Council did not pass the law.

In 2018: Representative Mohamed al-Akkad submitted another draft law that would increase the penalties for those involved in a minor marriage to imprisonment from 5 to 10 years, or to pay a fine of between EGP 10,000 and EGP 100,000, or both penalties, but the Council did not pass the law.

The Ministry of Justice also submitted a draft law punishing imprisonment for more than 7 years in addition to approving a fine for those involved in the marriage of a minor, and it was referred to the Prime Minister, which referred it to the House of Representatives, and the Council did not pass the law.

In 2019: The National Council for Women submitted a law entitled (Combating Underage Marriage) to the cabinet and the House of Representatives, but the Council did not pass the law.

In 2019: The Council postponed in December 2019 the discussion of the Prime Minister’s decision to amend Law No. 143 of 1994 on Civil Status, known as the Law (Preventing Child Marriage).

In 2020: The Council postponed, in January 2021, the Prime Minister’s discussion of the draft amendment to Law No. 143 of 1994 on Civil Status, known as the Law (Preventing Child Marriage), to solicit Al-Azhar’s opinion.

In 2021: Representative Ahmed Bilal Al-Berlusi submitted a draft law consisting of (11) in addition to an explanatory note that includes the legislative and constitutional pillars that justify the necessities of working to issue the draft law and show the positive societal impact of its issuance (2 October 20121).

In 2021: Representative Enas Abdel Halim submitted a draft law prohibiting a marriage contract from being documented for someone under the age of 18, and increasing the penalty if the crime was accompanied by forgery in official documents, and the draft was not discussed until (11 October, 2021).

In 2022: Representative Amira El Adly submitted a draft law that stipulates the child marriage as human trafficking, and punishes perpetrators by 5 years in prison at least.

What distinguishes the new draft law?

After presenting all the previous stations, the question that is raised is what distinguishes this new draft law. Ramadan explained to Daily News Egypt that she is optimistic about this new draft law as the articles of the law are very good.

“The first point that impressed me in this law that it stipulates that whoever instigates or helped in this crime shall be punished including the mazoun, as we used to witness some concerns on imposing penalties on the mazoun while they are one of the most important pillars that facilitate this crime,” according to Ramadan

Ramdan continued that the second point that impressed her was that the crime does not expire by passing time, so the girl can report any age and time.

Will this law be deterrent law in combating child marriage?

For her part, Sakina Fouad, adviser to former interim president Adly Mansour for women’s affairs, told Daily News Egypt that child marriages are a violation of childhood and should be considered child trafficking.

She explained that the rise in the number of child marriages in Egypt is a result of the economic conditions and lack of girls’ awareness about their rights and is also due to parents’ exploitation of some girls’ weakness and their lack of awareness of their rights.

Fouad also noted that the bad practice had already existed, but what helped it return at high rates in 2013 was when the Muslim Brotherhood came to power in the country. At the time, the Brotherhood-dominated parliament proposed a law to drop the minimum age for female marriage to 16 years old, but luckily, she said, that parliament was dissolved before the law was approved.

She continued that the crime exists, yet trafficking in the name of religion and using it as a cover for backwardness and extremism is at the core of the matter, which is a violation of the values of the girl and the rights of women.

Thus, she asserted that there is a demand to increase religious awareness and knowledge of true religion, as that will stand in the face of the bad practice.

Fouad said that no doubt that the last years witnessed a strong change in the society but still not the change that we hope for.

In addition, she said that awareness must be spread on the problems arising from child marriage

Moreover, Fouad commented that it is not easy to reap the fruits of the proposed law at the moment, since it will take time to combat traditions and wrong Islamic views, which will not be easily eradicated.

“We have many laws but on the other side we also have a lot of ways to manipulate them,” Fouad said.

Fouad explained that the most important point is how to protect the application of this law from all forms of manipulation and deception, such as obtaining birth certificates older than the age of the girl in order to make her marry.

“The law must be supplemented with guarantees to ensure the accuracy of law enforcement, for example, so far we do not have a clear mechanism for age estimation,” she said.

Ramadan concluded by stressing that the penalties stipulated in the draft law are enough, but agrees with Fouad that the problem lies in its implementation.