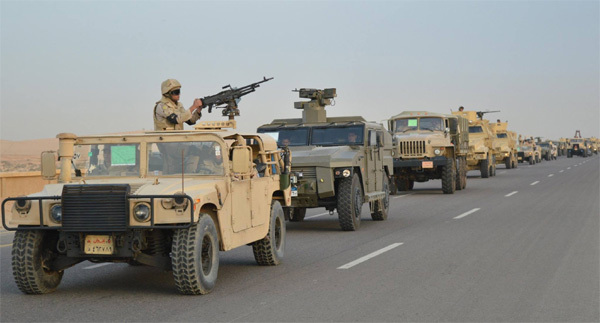 Twenty-three terrorists were neutralized in sweeping counterterrorism operations in Sinai after a terror attack that killed one officer and 4 military personnel in the same region, according to the Egyptian Armed Forces spokesperson.

The Egyptian army published photos of its intensive operations in Sinai after thwarting a terrorist attack on a water-pumping station in western Sinai four days ago.

The army conducted airstrikes on the militants’ hideouts following the terrorist incident, as the military spokesperson Colonel Gharib Abdel Hafez announced the besieging of some militants in isolated areas adjacent to the borders.

He explained through an official statement released on his Facebook page that the air force carried out an airstrike on 7 May, which destroyed some terrorist outposts, and two four-wheel-drive vehicles used by terrorist elements to implement their criminal plans, resulting in the killing of nine ‘Takfiri’ elements.

He pointed out that the Armed Forces succeeded in discovering and destroying some improvised explosive devices (IEDs) intended to target the army. The operation also destroyed a vehicle and killed seven ‘Takfiri’ elements.

The military spokesman added that law enforcement forces managed, this morning, Wednesday, to discover the movement of some terrorist elements in the vicinity of one of the security pillars and dealt with them, which led to the killing of 7 Takfiri elements and the seizure of some automatic rifles, storage, hand grenades, wireless devices, and volcano launchers.

He pointed out that these operations claimed the life of an officer and 4 soldiers, and wounded two other soldiers.

Egyptian President Abdel Fattah Al-Sisi stressed that the terrorist attacks will not undermine the resolve of the Egyptian state or the Egyptian army in their war against terrorism.

Al-Sisi explained through his Facebook page that the loyal people of Egypt respond to the call of their homeland with all courage and sacrifice, continuing in unique self-denial and a belief that will not be shaken by the doctrine of homeland preservation.

Egypt’s security forces launched on 9 February 2018, an extensive military operation in Sinai, aiming at targeting dens and ammunition storage that are being used by terrorists, according to the first statement from the armed forces. The operation includes naval, air, and infantry forces.

Since 2013, state security forces, represented by both the army and the police, have been engaged in violent clashes with “Sinai Province”, a group previously known as Ansar Beit Al-Maqdis.

In 2014, the group declared its affiliation with the Islamic State group (IS) and launched deadly attacks on army and police checkpoints. Despite the defeat of the IS group in its capital in Iraq, the extremist groups continued their attacks from time to time in different Arab countries.