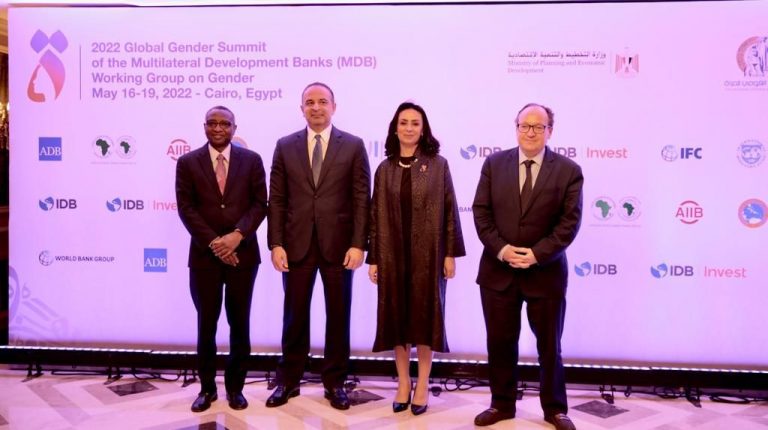 The summit is running from 16 to 19 May in Cairo, Egypt in a hybrid format under the patronage of the Ministries of International Cooperation and Planning and Economic Development, along with the National Council for Women.

As we move forward to recover from the social and economic disruptions experienced over the past two years, the 2022 Global Gender Summit brought together sector leaders, experts, policy makers, development practitioners, and other stakeholders to reflect on the theme ‘Building Back Better: Advancing Gender Equality for a More Resilient Future.’

Supported by a group of 11 MDBs, the summit aims to serve as a platform to facilitate the exchange of experiences, ideas, and good practices in order to meet current challenges affecting the gender equality agenda globally.

The three-day summit focused on three gender topics — employment and the care economy; climate change; and digitisation. This will also pave the way towards the UN Conference of Parties on Climate Change (COP 27) that will be hosted by the Egyptian government later this year.

As part of her participation, Al-Mashat said that evidence has shown that women’s economic role is “macro-critical”, with estimates that closing the gender employment gap could increase GDP by an average of 35%, emphasising that the participation of women in the labour force is an imperative investment in a sustainable, green transition.

She also said that the last few decades have witnessed substantial improvements on the gender equality front.

“Today, we capitalise on this momentum by pushing gender equality not merely as a thematic issue, but by transforming the system from the inside out to embody inclusive, actionable, and informed policies guided by women’s realities,” Al-Mashat added.

“In light of Egypt hosting the COP 27 this year, amplifying the voices of women and girls as agents of change at the heart of the climate agenda is an integral ingredient for sustainable development,” the minister concluded.

For her part, El-Said said that Egypt was the first country in world to issue a policy paper on rapid responses to the situation of women during the COVID-19 pandemic to follow up on the effects of the pandemic on women and girls and to develop a gender-sensitive response.

She further explained that this paper focused on several pillars, the most important of which is the emphasis on the necessity of integrating women into decision-making during the crisis management process to improve health security monitoring mechanisms, health detection, and prevention; and launching initiatives that support women’s economic participation, where support has been provided to informal workers — including women — through bonuses and an advantage card.

El-Said also mentioned that the rapid economic, social, and environmental changes that the world is going through impose more challenges and burdens and negatively affect the efforts made by countries to empower women.

Hence, the minister stressed the importance of intensifying attention to issues of women’s empowerment in all fields, which comes within the framework of achieving SDG Five: Achieve gender equality and empowering all women and girls.

Moreover, Morsy said that Egyptian women are currently living their golden age in light of the attention and appreciation they receive from the state.

She explained that the political leadership has taken a strong interest in supporting the empowerment of women in all fields, believing in their role and status as active and essential partners in Egypt’s direction towards achieving the goals of sustainable development and building a society based on equality and social justice for all.

Morsy also emphasised how this summit highlights important issues on the local, regional, and global level, which have greatly affected women and their participation in the labour market, which puts the world in front of a great challenge to work on integrating women into the labour market and overcoming the obstacles they face.

This is in addition to the dilemma of climate change and its repercussions on different countries of the world and the role of women in confronting them.

“The summit will address issues in line with the objectives of the 2030 National Strategy for the Empowerment of Egyptian Women that was launched by President Abdel Fattah Al-Sisi in 2017, stemming from Egypt’s 2030 Vision of Sustainable Development,” She continued.

Furthermore, Fayolle said that today’s climate and development challenges require more than ever the involvement of all to ensure an inclusive and green transition.

This means greater participation from women in every sector of the economy, including in crucial leadership positions.

“With gender equality being at the heart of the EIB’s mission, we are proud to chair the MDB Working Group on Gender and to host the MDB Gender Summit under the auspices of the Egyptian government,” he said.

“This summit, designed with our fellow MDBs will share concrete solutions to build a sustainable and gender-resilient future that will feed into the Finance in Common Summit and COP 27 discussions,” he said.

For his part, Muhtar said that “at this critical juncture of human history, and as we aim to build back better as well as create a future we all want, inclusive recovery is indispensable.”

He explained that this requires a new way of thinking and a renewed commitment to respond to complex social and economic dynamics in a bid to build a more inclusive, resilient future.

Among the most profound revelations are the sharp gender-based disparities which persist, making women vulnerable at home, in the labour market, and on the planet, he added.

“For these reasons we are delighted to co-host the 2022 MDBs Global Gender Summit along with the EIB to deepen our collective understanding of key topics that are impacting women, and present solutions to give women greater self-determination as well as promote their full participation and leadership in the context of employment, climate change, and digitisation.”

“We are grateful to the Egyptian government for hosting this important event and highly value the collective efforts of our fellow MDBs and partners, without which this event would not have been possible,” he concluded.