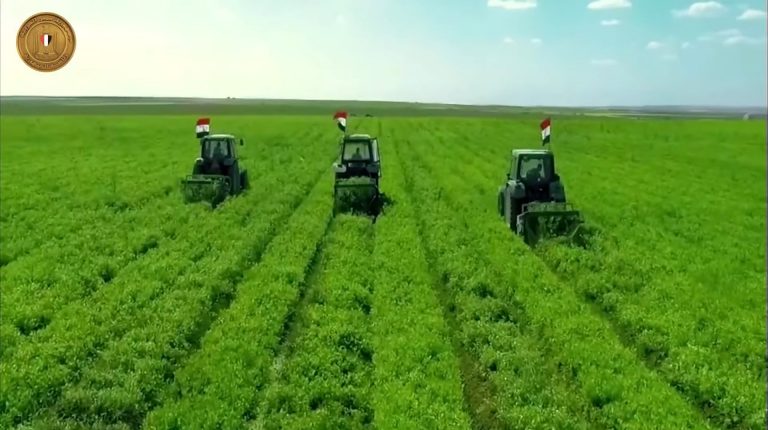 Egypt’s President Abdel Fattah Al-Sisi said that the costs of agricultural projects are much greater than any other projects in the Nile Delta area, where reclamation is carried out in the desert which requires different ways of irrigation unlike the land parallel to the Nile.

The president added during his inauguration of the “Egypt’s Future” project for agricultural production on Saturday: “When we look at the parallel strip of the Nile during the past years, we see that it has been built on and we have left the desert back extending on the sides of the Nile, in which we can build cities and new life and preserve the agricultural lands that already exist.”

The project is located on the Cairo-Dabaa road, and aims to maximize production opportunities, provide high quality agricultural products at reasonable prices for citizens, bridge the gap between production and import, achieve food security and self-sufficiency in strategic commodities.

The total area allocated for the “Egypt’s Future” project is 1.5 million feddan, which represents 50% of the “New Delta” project.

Al-Sisi highlighted the importance of finishing the project before the end of 2023, in addition to the projects in Toshka, Beni Suef, Minya and others, given the current circumstances.

During his speech in the inauguration, the president mentioned that the “Egypt’s Future” for agricultural production needs 1,250 megawatts of electricity for operation.

He stressed that the state’s interest in infrastructure during the past seven or eight years has enabled the provision of electricity for this important project. “We are talking about adding 2.5 million feddan, representing 25% of the total area of agricultural land in Egypt over thousands of years, and this is only related to this project, in addition to providing the necessary electricity for homes and hospitals, which were previously suffering from frequent power cuts throughout the day.”

Moreover, the president touched on the development of electricity, water, roads and other elements in the Egyptian countryside as part of the “Decent Life” initiative, which would cost between EGP 800-900bn.

“We are reclaiming 10 million feddan to improve people’s standard of living, which was not done during the past years, at a cost of up to one trillion Egyptian pounds. Therefore, what is being spent is not much for agriculture, establishing electricity networks, roads, levelling the land, and extending irrigation networks and canals,” Al-Sisi said.

He further affirmed the state’s ability to provide the necessary seeds for wheat cultivation, in a way that achieves the greatest benefit for farmers. “The projects that have been accomplished during the past years were based on studies and the work of committees of senior specialists and university professors.”

The project started with the reclamation of 200,000 feddan, then work was quickly done to reclaim 150,000 feddan as an additional area, bringing the total area of ​​reclaimed lands to 350,000 feddan.