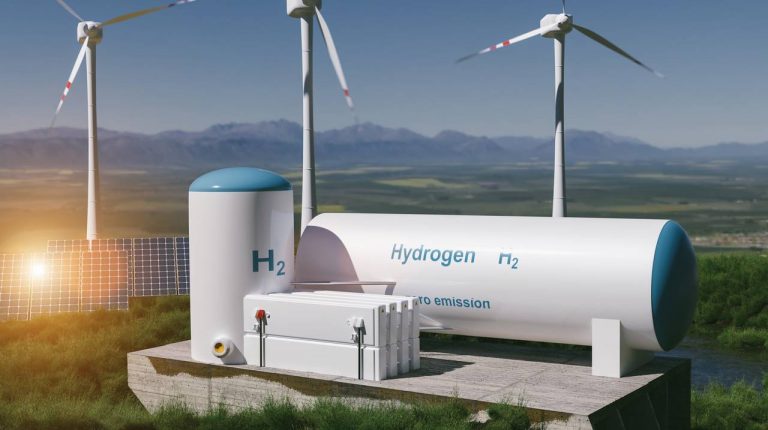 On 15 May, Prime Minister Mostafa Madbouly announced Egypt’s strategy to deal with the current economic crisis. During the announcement, Madbouly expressed the country’s ambition to become a major hub for green hydrogen and ammonia production.

Madbouly’s statements coincided with international calls to combat climate change and ahead of Egypt hosting the upcoming UN Conference of Parties on Climate Change (COP 27) in Sharm El-Sheikh this November.

In 2021, the Intergovernmental Panel on Climate Change (IPCC) issued warnings about the urgent need to move from reliance on the use of air-polluting fossil fuels as a source of energy to other energy sources that are free of polluting emissions to stave off the effects of the worst climate crisis the world may witness in the post-industry era.

Among the solutions proposed to combat climate change and global warming, green hydrogen was one of the potential solutions for use in sectors that consume the most energy, such aviation, shipping, heavy industries, and even in heating systems at homes.

In 2020, the EU adopted its hydrogen strategy in the framework of the so-called ‘European Green Deal’, a plan that proposes the transition to green hydrogen by 2050 through local production and the establishment of a stable supply from Africa.

Hydrogen is the lightest and most abundant element in the universe, in addition to being a clean energy source that can be an alternative to fossil fuels that the world depends on to provide nearly 80% of the world’s energy supplies, which are main sources of greenhouse gas emissions that cause global warming.

When we say ‘green hydrogen’ we do not describe the colour of the gas that may become liquefied, but it means that its production will not pollute the environment with harmful emissions.

A study published in the journal ‘Environmental Science’ indicates the potential of hydrogen as a clean energy source and as an alternative to fossil fuels by applying water electrolysis technology that extracts hydrogen from water to produce green energy and avoid greenhouse gases emissions that cause global warming.

“We believe that producing green hydrogen is the key to a carbon-neutral economy, producing hydrogen from water is a great thing to do,” says Young-Moo Lee — Professor of Energy Engineering at Hanyang University in South Korea, and the lead author of the study.

He added that the global production of hydrogen is about 70 million tonnes each year, and this amount is used mainly in the manufacture of ammonia fertiliser and chemicals such as methanol, and to remove impurities during oil refining.

Hydrogen also serves as a chemical energy carrier, such as oil or gas. It stores three times as much energy per unit mass as conventional gasoline, and when it burns in air, it combines with oxygen to produce water again.

The International Energy Agency (IEA) in a 2019 report, encouraged countries to invest in hydrogen as a flexible and versatile solution so that it can be used as a clean fuel that balances other renewable energy sources in generating electricity and providing low-carbon energy over very long distances, and storing electricity to counteract imbalances weekly or monthly supply and demand.

Jauad Al-Kharraz — Executive Director of the Regional Centre for Renewable Energy and Energy Efficiency, which is an independent, non-profit regional centre — explains that the mixture of hydrogen and natural gas can contribute to reducing greenhouse gas emissions if hydrogen is produced from a low-carbon or zero-carbon source, such as solar energy, wind energy, or biomass.

He says that it is difficult to determine accurate numbers about the amount of green hydrogen that would achieve the goals of the Paris Climate Accords, especially since the current demand for hydrogen in the international market is mostly met through hydrogen produced using fossil energy, and hydrogen made in an electrolyser must consider several key issues, such as safety and storage. Energy experts have also suggested blending hydrogen into a natural gas pipeline network as a feasible way to supply hydrogen to markets.

“But it can be said that the shift towards a green hydrogen economy can contribute significantly to reducing greenhouse gas emissions in various sectors, such as industry and transportation, and thus to efforts to combat climate change at the international level,” Al-Kharraz noted.

Hydrogen can be extracted from fossil fuels and biomass formations such as agricultural plant waste or from the decomposition of water (hydrogen and oxygen), or a mixture of both. Natural gas is currently the main source of hydrogen production around the world.

As is the case in various energy sources, hydrogen is also divided into different types or “colours.” There is grey hydrogen, in which hydrogen is produced by reforming methane gas with steam, which is the current method used to produce hydrogen in the industrial sector in the US, according to Rachel Fakhry — Energy and Climate Policy Analyst at the Natural Resources Defence Council.

Fakhry points out that “in the case of blue hydrogen, hydrogen is produced by steam reforming of methane, but part of the carbon emissions is captured so that it is sequestered or used again, and there is also pink hydrogen; if the electricity used to split water into hydrogen and oxygen is sourced from a nuclear plant.”

As for green hydrogen, it is produced when renewable (wind, solar, hydro) electricity is used to split water into its constituents, hydrogen, and oxygen. The hydrogen production process yields zero-carbon and is air pollution-free.

Green hydrogen is produced by electrolysis using machines that break down water into hydrogen and oxygen without any by-products, and the large amounts of electrical energy that were consumed during that process were overcome by the availability of a surplus of renewable electricity in large quantities in the electricity distribution networks and so on.

Clean hydrogen could meet a quarter (25%) of the world’s energy needs by 2050 with annual sales of $770bn. The World Energy Council predicts that by 2025, national hydrogen strategies could cover countries representing over 80% of the global GDP.

Green hydrogen is an environmentally compatible chemical energy storage material, and therefore an important component of decarbonisation, according to a study published in ACS Catalysis in July.

“With the global trend towards its use, green hydrogen can replace coal and gas as feedstock in the steel industry, in addition to being used in long-distance transport of goods; hydrogen fuel cell trucks can also replace diesel-powered trucks,” Fakhry says.

According to Fakhry, green hydrogen also has the potential to provide long-term energy storage, which means access to a 100% renewable electric grid by serving as a form of seasonal storage to support the grid during seasonal changes in wind and solar energy, enhancing its reliability and resilience.

A study published in October in Applied Catalysis B Environmental notes that a joint research team at Georgia Tech and Georgia Technology Research Institute (GTRI) has developed a new process for splitting water and materials that increases the efficiency of green hydrogen production.

This makes it an affordable and accessible option for industrial partners who wish to switch to green hydrogen for renewable energy storage instead of traditional carbon-emitting hydrogen production from natural gas.

Coinciding with Madbouly’s statements on green hydrogen, Hassan Allam Utilities and Emirati firm Masdar for clean energy signed two memoranda of understanding (MoUs) with the concerned Egyptian authorities to cooperate in developing plants for the production of green hydrogen in the economic zone of the Suez Canal and on the Mediterranean coast.

During the first phase of the project, Hassan Allam Utilities intends to establish a green hydrogen production plant to be operational in 2026. The company plans to export the entire production to Europe and will use part of the production to supply ships in the Suez Canal zone.

The plant will produce 100,000 tonnes of green methanol annually to supply shipping tankers in the Suez Canal. The Egyptian company also intends to provide local industries that use energy intensively, such as the iron industries, with ammonia or hydrogen.

In February, the Cabinet announced that the Suez Canal Economic Zone (SCZone) had received a number of international offers to establish green hydrogen projects. The list of offers included Danish, Norwegian, and German companies specialised in the production of clean energy.

In press statements published on 29 December 2021, Minister of Electricity and Renewable Energy Mohamed Shaker said that Egypt is preparing to enter the era of green hydrogen production from water ahead of the COP 27.

According to the minister, the 2035 Energy Strategy plans to transform 42% of the total energy used in Egypt to renewable energy.

Furthermore, Egypt plans to produce green hydrogen from waste in a huge plant in eastern Port Said, which will cost $3bn to establish and is expected to produce 300,000 tonnes of green hydrogen annually using approximately 4m tonnes of organic waste and plastic non-recyclable materials.

UN Climate Change Expert Samir Tantawi believes that the use of green hydrogen will change the geopolitics of energy in the Middle East, so that Egypt becomes a regional energy hub, especially with other renewable energy projects implemented by the Egyptian authorities.

“The measures taken to invest in green hydrogen is part of a broader vision to position Egypt as an energy hub in the region.”

Agreeing with Tantawi, Al-Kharraz explained that the current efforts — especially those focused on encouraging the green hydrogen economy — will make Egypt a regional centre for renewable energy and green hydrogen, and a link between the Arab region and Africa on the one hand, and Europe on the other.

Note: An Arabic version of this article was published in Scientific American Arabic Edition (Lelelm).