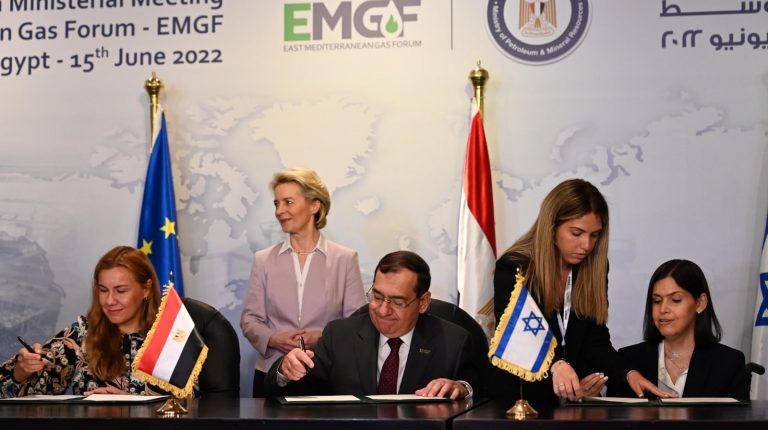 Egypt, the European Union (EU), and Israel signed on Wednesday a trilateral natural gas deal in Cairo, on the sidelines of the 7th ministerial meeting of the East Mediterranean Gas Forum.

The deal will allow Israel to export gas to Europe via Egypt. This comes as the EU races to cobble an energy strategy to replace the Russian gas supplies it has relied on for decades.

The deal would also pave the way for gas exportation from Egypt and any other East Mediterranean country to the EU, including the EU member states in the region.

“This will contribute to our energy security. And we are building infrastructure fit for renewables — the energy of the future,” Ursula von der Leyen, the European Commission president, tweeted on Wednesday from Cairo with a photo of the signing.

Egypt has been working to turn into a regional gas hub, utilizing its LNG plants in Idku and Damietta, through importing gas from Israel and Cyprus and re-exporting it to other markets. Both Cyprus and Israel need Egypt, as it already has the necessary infrastructure in place.

To fully understand the Egyptian position, one must consider the country’s existing export infrastructure developed over the previous decade. The infrastructure did not only include the two LNG plants, but also two pipelines: the Arish-Ashkelon pipeline and the Arab Gas Pipeline (AGP).

Namibia’s economy expected to grow by around 3% in 2022:central bank