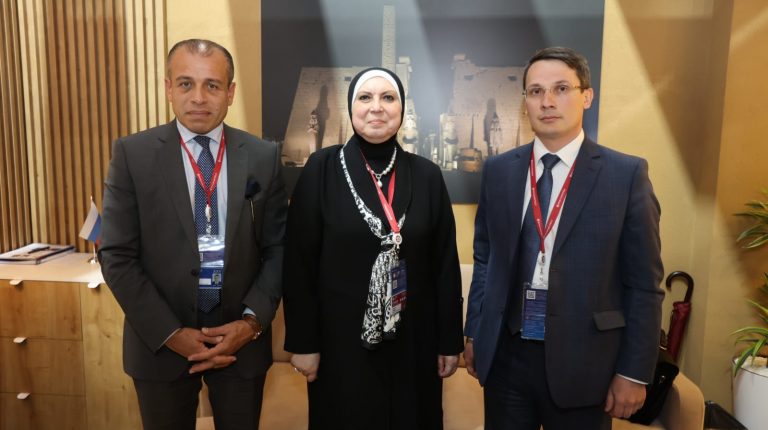 Egypt’s Minister of Trade and Industry Nevine Gamea stated that a free trade agreement between Egypt and the Eurasian Economic Union (EAEU) has been negotiated. This agreement represents a new bridge to strengthen and develop joint economic relations between the two sides in various fields and at all levels.

Gamea said that the agreement is the main engine for the development of trade exchange rates, increasing joint investments between member states to distinct levels in the interest of Egypt and EAEU alike.

The minister added that the last period witnessed the holding of four rounds of negotiations between Egypt and the EAEU.

She highlighted the importance of reaching a comprehensive and balanced agreement that meets the aspirations of the Egyptian people and the peoples of the Union to develop trade exchange and enhance industrial and investment cooperation in addition to all aspects of economic cooperation.

This came during a meeting between Minister Gamea and Minister in charge of Trade of the Eurasian Economic Commission, Andrey Slepnev, at the conclusion of the Egyptian minister’s participation in St. Petersburg International Economic Forum.

The minister elaborated that the fourth round of negotiations was followed by many technical and preparatory meetings between experts from both sides. These meetings aim to bring their views closer in order to reach a consensual formula for those negotiations that achieve desired goals and opportunities, foremost of which is developing rates of trade exchange, enhancing joint industrial cooperation and attracting more investments from EAEU countries to the Egyptian market. Accordingly, Cairo will host the fifth round of negotiations in the coming period.

There are many elements that can be built upon to strengthen and develop trade and economic relations between Egypt and the Eurasian Union countries to create real opportunities for constructive and fruitful cooperation, the most important of which is diversity and integration in activities, industrial capabilities, geographical locations and the size of markets on both sides, according to Gamea.

“Egypt welcomes receiving more investments from the EAEU countries and shows its will to facilitate investment procedures and overcome any obstacles facing the investments of the countries of the Union,” the Egyptian minister said.

She further called on companies and businessmen from both sides to establish partnerships and joint investment projects as well as take advantage of the positive and encouraging business climate on both sides.

On his part, Slepnev affirmed the EAEU keenness to conclude a free trade agreement with Egypt, especially since there is a great consensus in visions between the two sides on many topics of negotiations.