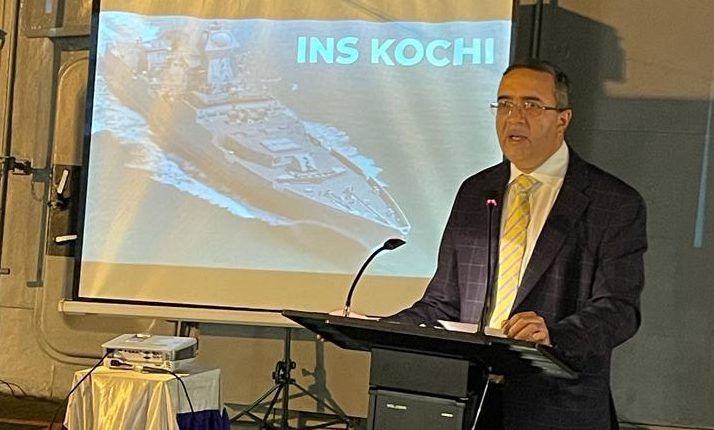 INS KOCHI — the largest destroyer ship in the Indian Navy — carrying 8,000 tonnes of displacement visited Safaga for a “Turn Around” from 28 to 30 June 2022.

The destroyer also participated in a PASSEX in which it closely cooperated with the Egyptian Navy. India’s Ambassador in Cairo Ajit Gupte visited the INS KOCHI to meet with the fleet commander and the crew.

The ship’s visit is part of the ongoing intensified defence exchanges between India and Egypt.

The ambassador said that ever since the decline of the coronavirus pandemic, there has been a renewed push in bilateral exchanges between India and Egypt, with a number of delegations from India visiting Egypt over the last year or so.

He also said that cooperation in the defence sector has emerged as one of the focus areas with an increasing number of bilateral engagements.

Furthermore, Gupte said that India and Egypt enjoy cordial defence relations and undertake various activities in the fields of training, joint exercises, ships and aircraft transits, defence exhibitions, etc. under the aegis of the Joint Defence Committee (JDC) to enhance their defence cooperation.

He also attended the Egyptian Defence Exposition (EDEX), in which ten Indian defence companies also participated in its second edition that was held in Cairo between November and December 2021 and showcased their state-of-art products.

Furthermore, an Indian Air Force contingent, including three Su-30MKI aircrafts and two C-17 aircrafts, are presently in Egypt and are participating in the month long ‘Tactical Leadership Programme’ which began on 24 June 2022.

Some of the recent interactions between the Indian and Egyptian Navies include a port call and joint exercise by India’s stealth frigate INS TABAR from 27 to 28 June 2021 and 3 to 4 September 2021 in Alexandria.

On 4 May 2022, the INS TIR, INS SUJATA, and CGS SARATHI — ships of the First Training Squadron of the Indian Navy — participated in a Maritime Partnership Exercise (MPX) with Egyptian Naval ships in Safaga.

The INS TARANGINI — a sailing training ship of the Indian Navy also made a port call in Alexandria from 17 to 20 May 2022 as part of LOKAYAN 22.

It also interacted closely with the Egyptian Navy and held cross-training, along with cultural and sports events.