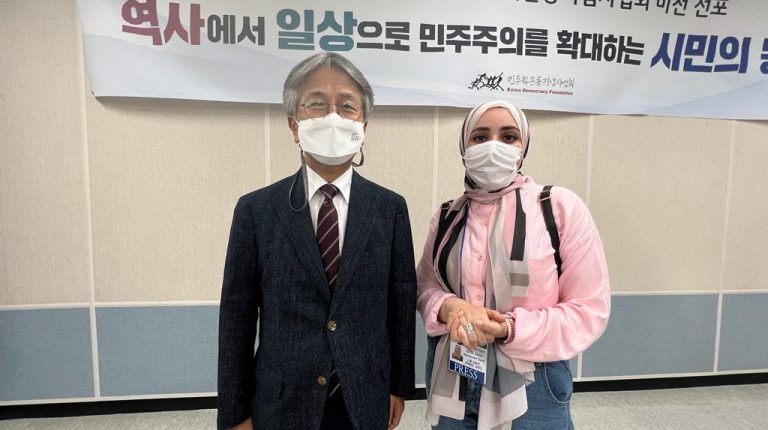 The interview touched on the democracy and democratization movement in Korea, as well as discussing the main purpose of the foundation.

It also tackled the impact of COVID-19 on democracy and human rights. The interview also discussed the democracy situation in the Middle East. During the interview, they discussed the correlation between democratization and industrialization. They revealed why the conservative parties are gaining power in Korean society.

The KDF is an organization that inherits, develops, and passes the spirit of democracy development.

After the interview, DNE visited the foundation’s archives to learn about the historical records of the democratization movement. We toured the Democratic Living Exhibition Hall and participated in making posters that call for freedom. 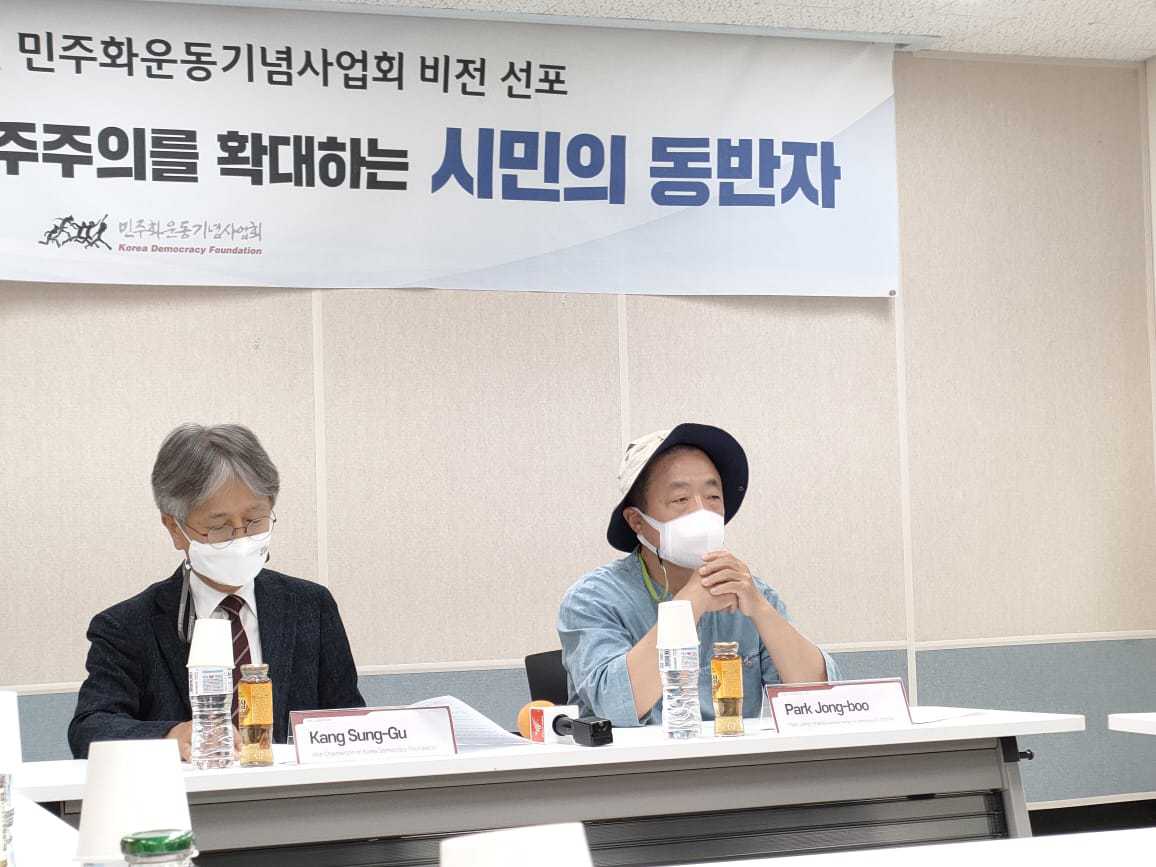 What is special about the Korea Democracy Foundation? And what is its main goal and future prospects?

There are several incidents in Korean History that became the turning point in democracy, including 19 April and 18 May revolutions. These revolutions are now celebrated according to their special laws and acts.

Our agency is the only public foundation that promotes democracy in Korea since the government inauguration of 1948. This year, we celebrate the 21st anniversary of our inauguration. The KDF was established in 2001.

I should say the purpose and the great aim of our agency is to record the history of the democratic movements. This means that we promote democracy and also keep a record of it.

For instance, in the first chapter, first act, in our Constitution, we promote democracy.

Meanwhile, we face three difficulties or challenges that we need to resolve. First, we have to hand down right democratic values to the next generations. Second, we have to combine it with the current contemporary agendas and democracy. We want to expand democracy from history to our daily life. Third, we need to contribute to the democracy in the nearby Asian countries.

How can Korea and your foundation contribute more to the development of democracy?

In addition, I also believe advancing democracy in Korea is also contributing to the global movements of democracy.

The relationships we had with advanced nations was mostly about getting ODAs or getting economic financial support from those countries.

But we believe, one of the most important things is to do public diplomacy, which is to do it from the working level with the civilians and making partnerships with them to actually promote democracy in daily life.

Korea had been one of the poorest nations around the world back in the days, and now it is one of the top 10 economic powers. So do you believe its democracy contributed to its economic development?

It is a correlation between democratization and industrialization. It is very hard to generalize the core relationships. So I’d like to just take Korea as an example in this regard. In the case of Korea and its development, I believe the middle economic power group should be considered as an important role.

In the case of Korea, the economic power gained by the medium wealth group, it was one of the factors for democracy but I cannot generalize this as what people say in order to attain democracy you need to have some kind of industrialization ready, I don’t think that’s the case, It’s only true for Korea. Because after democracy was achieved, it was later like the battleground of the private companies because their competition became an important factor. So I hope that this factor about industrialization and democratization should be considered equally, and there are other cultural factors that need to be considered which is the high college entrance rate or the low illiteracy rate and many other factors in the cultural field but I think this has to be examined by the academic field as well. 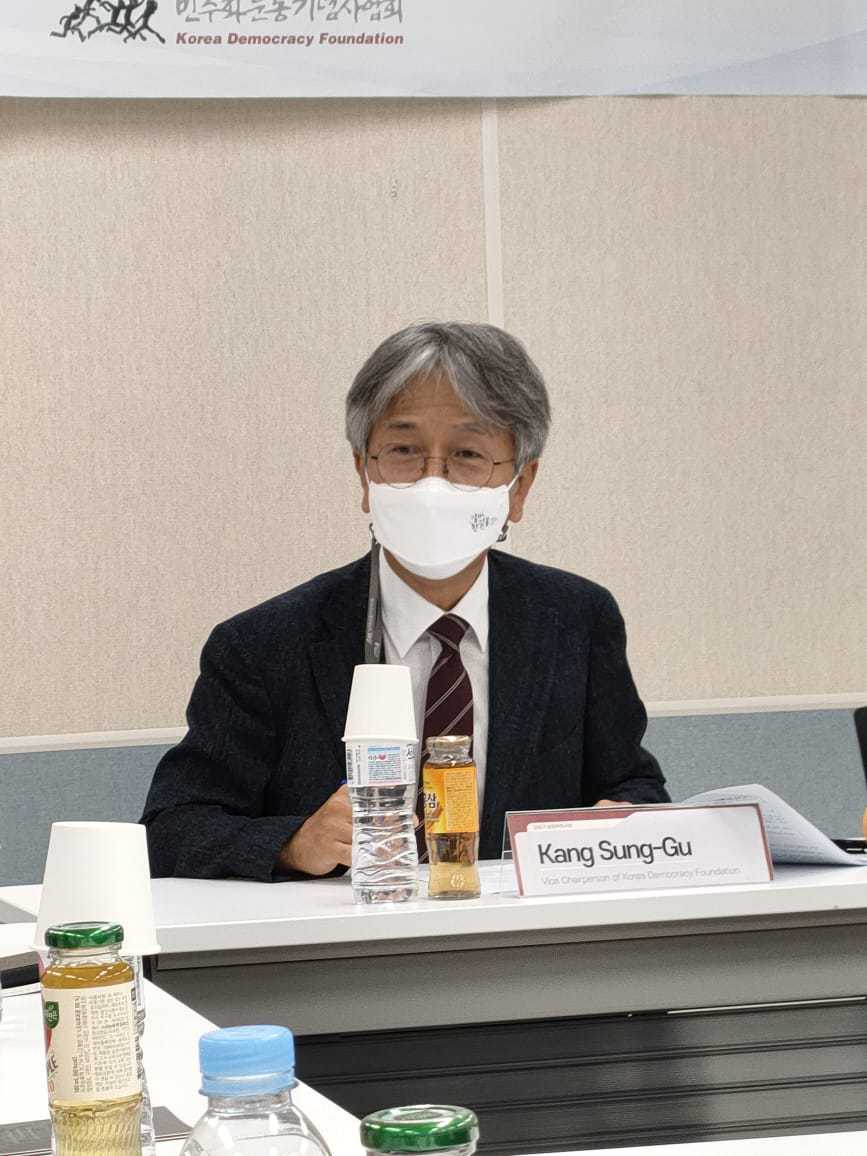 According to foreign diplomacy, I heard that there was a successful reaction from the government on the pandemic, but because of the conservatism of the Korean society, some of them are underlined. So what do you think of this and how did COVID-19 pandemic affect Korean democracy and its society?

COVID-19 was a very serious threat to human rights and democracy. Recently, there have been presidential elections and some regional elections, but because of the pandemic, the social pressure was a little bit high and tension was high.

The pandemic showed us that if we are unprepared, how far a pandemic can affect the community as a whole.

By reacting to these threats, we begin to know how important it is to have a stronghold democracy in our nation.

We’re also able to see that human rights and democracy are the values that can very easily be threatened in the case of a global pandemic like this.

Could you give us a background on why the conservative parties are gaining power in Korean society?

Although the presidential election was won by the Conservative Party, I believe their success was in part due to ruling out the extreme rightist conservatives.

I also believe the Koreans have faith that even after the Conservative Party had won, we would not turn to extreme rightist movements like in the past.

But we also have seen some of the challenges; the prosecutor turned on the President and his followers and all the press related officials, they are not the ones given power by the citizens and if they come into power, it can be a threat to our society. So when these people were not elected by the people who actually take government officials and the jobs it can be a great threat to democracy.

Finally, we should be able to answer a lot of other democratic movements, not only political democracy but also social and economic democracy as well.

After President Trump left office, has there been any change in the north and South Korean relations?

Sadly, there wasn’t. North Korea had deep negative thoughts about South Korean governments, and we see that the pandemic has worsened the situation.

How do you see the level of democracy in the Middle East, especially in Egypt?

I can’t say I can answer 100% correctly because I am not fully aware of the situation. But when I think about the Arab Spring in 2011, you achieved democracy, but then you retreated a step back into authoritative government once again. I believe that it’s not just the institutions and laws that make democracy possible.

There is also a personal belief that I wanted to share from a long time ago. Israel’s violence greatly undermines and hinders democracy in the region.

I’m not an expert so I cannot answer, but based on the experience of Korea, I believe democracy comes from the people’s power.

In the Middle East, the public could not keep the democracy brought out by the Arab Spring.

The democratic movement in Korea reached its current stage after several decades of development.

I believe building democracy should be from the bottom up. So the KDF prepares educational programmes for the young people from less democratic countries (that is still in the process). I believe the young people from Egypt and other countries should get the chance to come to Korea and not just focus on industrialization, but also democratization.