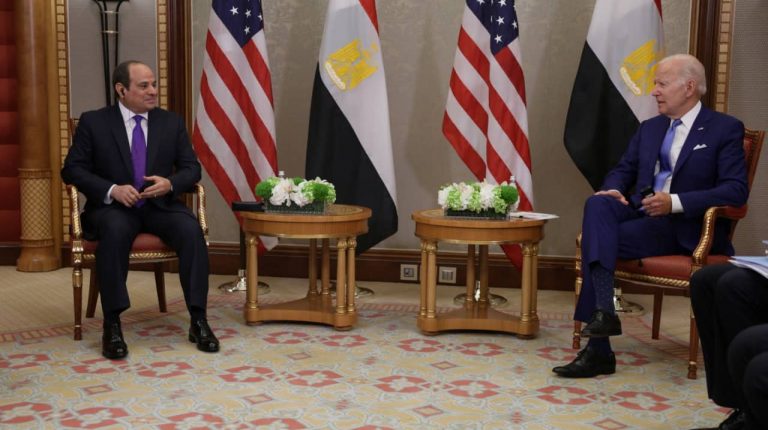 Egypt’s President Abdel Fattah Al-Sisi met Saturday with his US counterpart Joe Biden, on the sidelines of the Jeddah Summit for Security and Development in Saudi Arabia.

Al-Sisi stressed Egypt’s keenness to strengthen the distinguished partnership relations between the two friendly countries. This was the first meeting between the two leaders since Biden was sworn in as president in January 2021.

Al-Sisi arrived earlier on Saturday, at Jeddah Airport, where he was received by Saudi Crown Prince Mohammed bin Salman.

The Egyptian president highlighted the importance of the Cairo-Washington partnership in promoting peace and stability in the Middle East region, affirming Egypt’s aspiration for further coordination and consultation with the US on various issues of common interest.

He reiterated the Egyptian firm position of supporting countries in crisis through strengthening their national institutions, in order to end the suffering of their peoples and preserve their capabilities.

The meeting also tackled the developments of the Ethiopian Dam dispute, as Al-Sisi stressed Egypt’s firm position on the necessity of reaching a legally binding agreement on the filling and operation of the dam, in a manner that preserves Egyptian water security and achieves the common interests of the three involved countries (Egypt, Ethiopia, and Sudan).

He also expressed Egypt’s keenness to cooperate with the United States to revive the Palestinian-Israeli negotiation process.

On his part, President Biden expressed his deep appreciation for the Egyptian efforts to establish peace in the region, praising its key role in achieving the truce between the Palestinian and Israeli sides and the Gaza reconstruction initiative.

He also stressed the US administration’s aspiration to activate the frameworks of joint bilateral cooperation with Egypt, and to enhance the existing strategic coordination and consultation between the two friendly countries in the coming period.

Moreover, both leaders reviewed aspects of bilateral cooperation between Egypt and the United States in several fields, especially confronting the COVID-19 and Russia-Ukraine war repercussions on food and energy security.

Al-Sisi’s participation in the Jeddah Summit comes out of Egypt’s keenness to develop the partnership between the Arab countries and the US in a way that meets the aspirations and interests of current and future generations in the region, and enhances joint efforts to confront regional and global challenges.