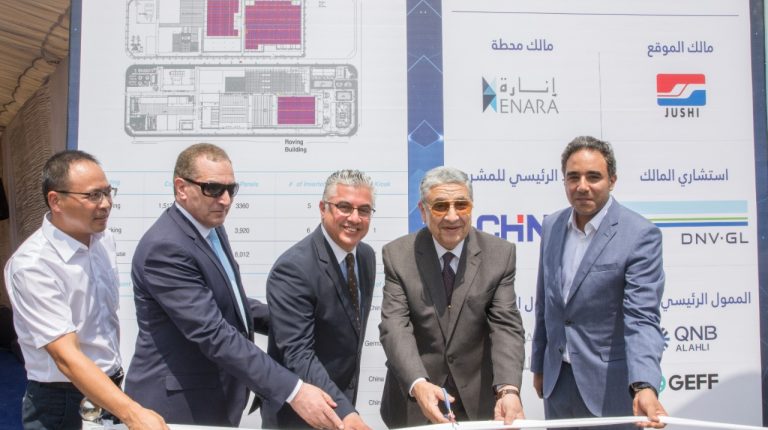 Mohamed Shaker, Minister of Electricity and Renewable Energy, inaugurated on Tuesday a solar power plant, with a production capacity of 10 GW/h annually, at the Chinese Jushi’s fibreglass factory in the North-West Gulf of Suez Economic Zone, Ain Sokhna.

The project was implemented through a partnership agreement between Jushi and Inara Capital, a leading renewable energy company, which is one of the economic zone’s partners in green hydrogen projects.

Minister Shaker said that there are great efforts made by the ministry and in coordination with various authorities in this regard to implement the Egyptian state’s strategy in the electricity sector and achieve the 42% target of energy produced from renewable sources, especially solar and wind, by 2035.

The Minister added that the state pays great attention to such projects and cooperates with neighbouring countries in the electrical interconnection, especially what is currently taking place between Egypt, Greece, and Italy, and this confirms that Egypt is a promising market in this field.

He pointed out that the signing of memorandum of understanding for green fuel projects between the Suez Canal Economic Zone, the companies affiliated with the Ministry of Electricity, and The Sovereign Fund of Egypt will contribute to accelerating the pace of energy projects’ construction, in conjunction with Egypt’s hosting of the climate change summit (COP27).

Walid Gamal El-Din, head of the Suez Canal Economic Zone, said that the project comes in implementation of the directives of the political leadership towards the use of clean energy and within the plan of the Suez Canal Economic Zone to localize renewable energy industries, in addition to motivating development partners and investors to invest and exploit new and renewable energy in the expansions of their projects to achieve our vision of all of the transformation of this type of energy.

Sherif El-Gabaly, Chairperson of Inara Capital, said that the project is the beginning of the optimal exploitation of the potential of the economic zone in generating clean and renewable energy, and he thanked all the relevant institutions that facilitated this project with our Chinese partners to come up with this optimal way.

Wu Ping, General Manager of Jushi Egypt, said that the factory is the largest among Chinese investments in Egypt, as it includes 3 production lines with a production capacity of 200,000 tonnes per year and provides 2,500 jobs. It is also one of the largest fibreglass production projects as it achieves revenues of more than $220m annually with export value of about $200m annually.