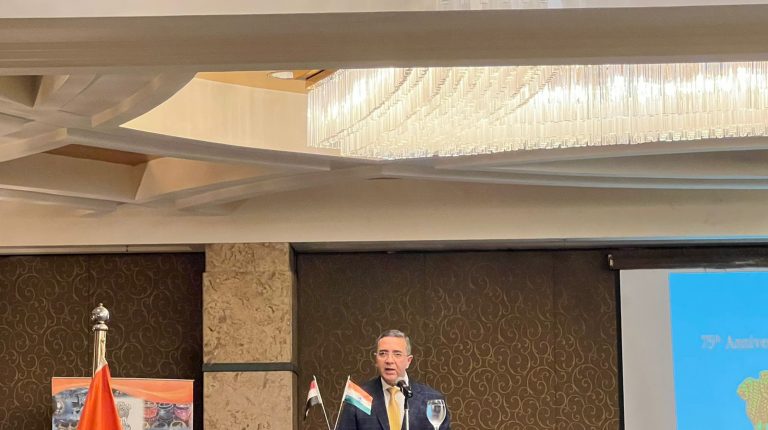 Indian Ambassador in Cairo Ajit Gupte expected that the political, economic and cultural relations between India and Egypt would see significant progress in the near future.

Regarding the advanced economic ties, the Indian ambassador said the volume of trade exchange between India and Egypt increased by 75% in 2021/2022 to reach $7.26bn.

In this regard, he stated that around 50 Indian companies are working in Egypt with total investments of $3bn in the sectors of clothing, agriculture, chemicals, energy, automotive, and retail trade.

He went on to say that Indian businesses seek to inject additional investments worth $700 m in the Egyptian market, as several Indian firms showed interest in green hydrogen and green ammonia ventures, citing the recent memorandum of understanding signed by Renew-Power company to invest around $8bn in this source of clean energy.

He lauded  the historical ties between his country and Egypt, asserting that President Abdel Fattah El Sisi’s visits to India in 2015 and 2016 gave further impetus to bilateral relations.

Gupte’s remarks came in a statement that he delivered on Tuesday evening in a celebration held by the Indian Embassy in Cairo to mark the 75th anniversary of establishing diplomatic relations between India and Egypt.

The event was attended by Assistant Foreign Minister for Consular Affairs Salah Abdel Sadeq, Vice President of Cairo Chamber of Commerce Sameh Zaki and MENA Editor-in-Chief and Board Chairman Ali Hassan, as well as a galaxy of media personalities, journalists and businessmen.

The Indian diplomat said his country cooperates with Egypt in the field of climate change, noting that a large Indian delegation will take part in the UN Climate Change Conference 2022 (COP27) scheduled for November in the seaside city of Sharm El Sheikh.

The Indian ambassador shed light on exchange visits between the two countries’ officials in the past few years, notably the visit of former Indian external affairs minister Sushma Swaraj to Egypt in 2015 and the visit of Egyptian Foreign Minister Sameh Shoukry to India in 2018.

He also highlighted phone calls between President Abdel Fattah Al-Sisi and Indian Prime Minister Narendra Modi during the coronavirus pandemic, as the two leaders expressed their solidarity with each other in fighting this disease through mutual cooperation.

He noticed that India and Egypt are set to organize a number of artistic events on the occasion of the 75th anniversary of establishing bilateral diplomatic ties.

On his part, the assistant foreign minister commended the depth of Egyptian-Indian relations, which he described as a model for international ties.