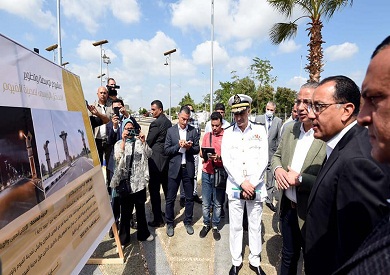 Prime Minister Mostafa Madbouly and his companions inspected the latest developments in Fayoum’s Al-Sawaqi area on Tuesday, ensuring the optimal utilisation of all state assets and capabilities in a manner that benefits the citizens of the governorate.

Madbouly stressed the importance of the development works in the, which meet the city’s urban development requirements and preserves its splendour and architectural layout.

The PM toured the area, during which he listened to an explanation from Director General of the National Contracting Company — which is affiliated with the National Service Projects Authority — Alaa Abu Donia about the implementation stages of the development project.

He also pointed out that the development work of the area includes an area of bazaars for traditional handicrafts, a group of restaurants and cafes, a monument to the martyrs of the homeland, and an open Roman theatre that will be available to all citizens free of charge, in addition to the establishment of a number of service facilities and parks while preserving the city’s visual identity.

A representative of the National Service Projects Organisation pointed out that the development work of the Al-Sawaqi area in Fayoum city includes preserving the walls on Bahr Youssef and changing some of the facilities at the site.

Moreover, a project consultant explained that this project covers the areas of the industrial lake and the connection of a new drinking water line in Al-Sawaqi area.