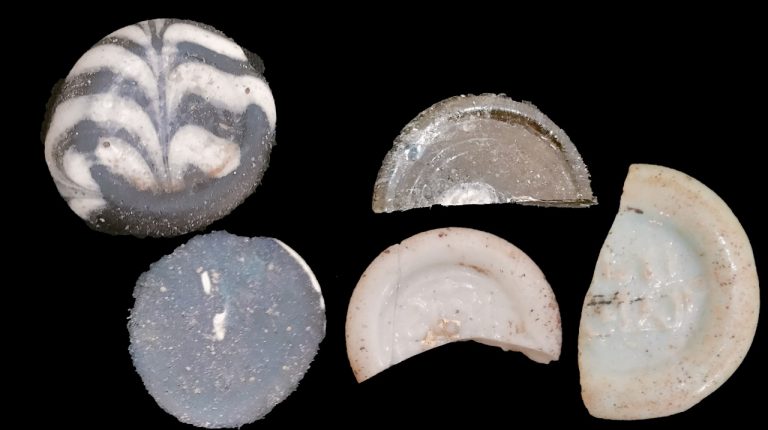 The Egyptian archaeological mission of the Supreme Council of Antiquities operating in the city of Esna succeeded in uncovering a cache containing a number of coins from different historical decades of the Islamic era, along with to parts of coinage moulds.

This came in a statement by Mostafa Waziri — Secretary-General of the Council of Antiquities — in which he stresses the importance of this discovery, which may indicate the existence of a mint and weighing house in the city of Esna, which the mission will work during the coming period to try to uncover.

For his part, Mohamed Abdel Badie — Head of the Central Department of Antiquities of Upper Egypt — said that the archaeological mission began its work on the site last year in the area located directly behind the Temple of Esna until the mission found this huge number of coins, which included a gold coin dating back to the Fatimid era of Al-Aziz Billah Ibn Al-Mu’izz.

The cache also included about 286 silver coins of Mamluk sultans and kings, and a foreign currency dating back to the era of Armenian king Levon II, in addition to a group of bronze and copper coins from the Ottoman era.

Meanwhile, Fathi Yassin — Director-General of Antiquities of Upper Egypt — explained the findings in more detail, explaining that the mission found a Fatimid gold dinar dating back to the era of Al-Aziz Billah, the Najmuddin Aybak dirham and the just king Badr Al-Din Salamish dirham made of silver, half a silver dirham of King Mansour Seif Al-Din Qalawun, two dirhams of the just king Zain Al-Din Katbugha, a dirham for king Al-Mansour Seif Al-Din Abu Bakr, and a dirham for Al-Malik Al-Kamel Saif Al-Din Shaaban.

It also includes a commemorative dirham on the occasion of the coronation of King Typhon II, and a set of bronze and copper coins from the Ottoman era.