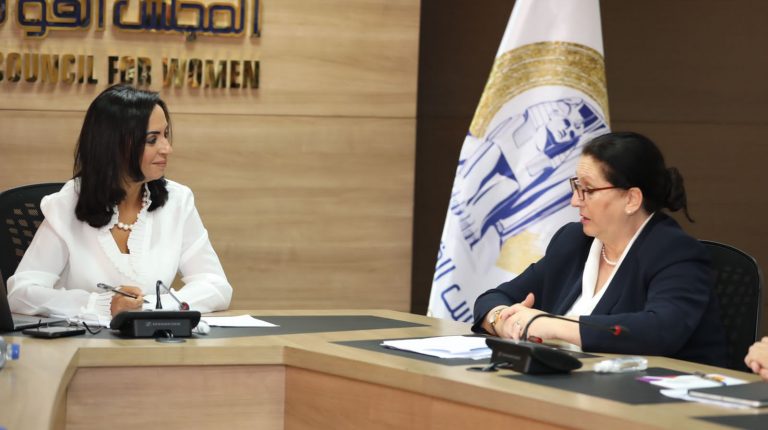 Khalida Bouzar — Assistant Secretary-General of the UN and Director of the Regional Office for Arab States of the United Nations Development Programme (UNDP) — praised the success of women’s rights in Egypt over the past few years.

She congratulated all Egyptian women on what has been achieved so far and all the glass barriers that have been broken, stressing that this progress is noticeable in all areas.

This came during her meeting with President of Egypt’s National Council for Women Maya Morsy at the council’s headquarters in the presence of Alessandro Fracassetti — Resident Representative of the UNDP in Egypt — to discuss ways of cooperation between the two sides in the field of women’s empowerment and to discuss the latest developments in this file.

Bouzar expressed her great happiness with the existing partnership between the two sides to advance women’s rights in Egypt, reviewing the most important programmes and projects that the two sides have cooperated in implementing so far, as well as areas of future cooperation.

She also praised the allocation of a women’s day at the upcoming UN Conference of Parties on Climate Change (COP27) that will be held in Sharm El-Sheikh this November, noting that the UNDP is ready to cooperate with the council to ensure the day’s success.

Moreover, Bouzar praised Egypt’s success in implementing a quota system and allocating seats for women in parliament — a matter that has not been achieved in many countries in the region that have not succeeded in implementing this on the ground despite its stipulation in the laws of these countries.

For her part, Morsy expressed her happiness with the existing partnership between the council and the UNDP to advance women’s rights in Egypt, affirming that she is looking forward to more future cooperation between the two sides.

She also reviewed Egypt’s preparations for the COP27, noting the importance of allocating a Women’s Day at the conference to contribute to spreading awareness among women and highlighting green job opportunities available to women, explaining that the issue of women will be integrated into all conference activities and themes.

Furthermore, Morsy welcomed cooperation between the UNDP and the council during the activities of the conference and all the proposals they have submitted so far.