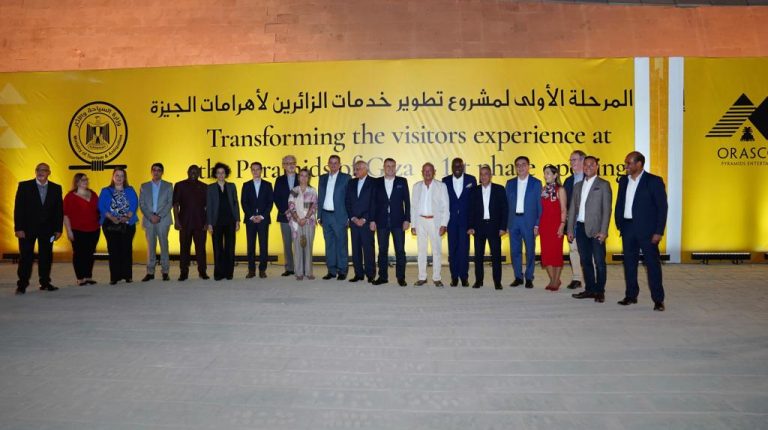 Within the framework of the the Protocol of Cooperation signed by the Supreme Council of Antiquities and Orascom Pyramids Entertainment to operate and upgrade the efficiency of the services offered to visitors to  the Giza Plateau, the Minister of Tourism and Antiquities Ahmed Issa witnessed together with Eng. Naguib Sawiris, CEO of Orascom Investment Holding, in the presence of the Minister of Foreign Affairs Sameh Shoukry, the start of the pilot operation of the the main gate on Fayoum road, the operation of Khufu restaurant within the International Restaurants Center,  excursions in the Giza plateau for individuals and groups , in addition to operating electric vehicles and seven main stops for visitors equipped with fully integrated services and a parking area for cars and buses.

Also present were Dr. Mustafa Waziry, Secretary General of the Supreme Council of Antiquities and Eng. Hisham Gadallah, the Chairman and CEO of Orascom Pyramids Entertainment, in addition to a number of Foreign, Arab, and African Ambassadors to Cairo, and a number of top government officials along with leadership roles within the Ministry and Orascom Pyramids Entertainment.

The pilot operation  has included the first batch of eco-friendly electric vehicles and buses, in addition to the car parking area in the Visitor’s Centre which accommodates a thousand vehicles. Visitors to the Giza Plateau will have a very distinguished touristic experience, through a tour passing by seven stops for seven main monuments within the plateau according to the new visitation route starting with the Visitors’ Centre, the Panaroma One, then Menkawre, Khufu, and Khafre pyramids, the Sphinx and then Panorama 4 ,  before returning back again to the visitor centre.

Main stops will include a number of services for visitors including the Information Office, Wi-Fi services, charging of smart devices, a mobile smart application, and a number of shaded seats, F&B outlets, and a number of other services like children areas, photography areas, ATMs, all within the Ministry’s efforts to upgrade services to the area which is considered one of most important tourist destinations in the world.

The Company has further completed the development and restoration of  the old Engineering building in the Giza plateau, which had earlier been used as a scrap storage facility to transform it into an International Center according to the most recent global standards. This centre will comprise of ten touristic restaurants erected with designs suiting the nature of the antiquities’ area, while it also includes parking for visitors.

Dr. Mustafa Waziry, Secretary General of the Supreme Council of Antiquities, expressed how grateful he was for the start of the pilot operation for the visitors’ gates and the internal transportation set-up with eco-friendly transport. This is with the purpose of development of services provided to visitors of the Giza plateau which is considered among the top touristic destinations in the world. This is to provide a unique and easier touristic experience while preserving the integrity of the archaeological sites. This helps to provide a basic digital and entertainment infrastructure aligned with touristic destinations to enrich the Egyptian touristic product and to create a competitive edge.

He further extended his thanks to Dr. Khaled El-Enany, former Minister of Tourism and Antiquities for the initiative launched by him to cooperate with the private sector to develop and raise the efficiency of services provided to visitors in archaeological sites and museums in Egypt. The ambition to create a better touristic experience resulted in the cooperation with Orascom Pyramids Entertainment.

Dr Waziry added that the Giza Pyramids site was not the only ones to benefit from that cooperation, but that a number of touristic destinations have benefitted similarly,  such as the Baron Palace in Heliopolis district in Cairo, and the citadel of Saladin, the Egyptian Museum in Tahrir, and Mohamed Aly Palace in Shoubra (due to be opened soon after completing its restoration), in addition to a number of other archaeological  sites. He pointed out that this project came in light of completing the engineering work to develop the Giza Plateau executed by the Egyptian Engineering Armed Forces Authority with funding from the Egyptian government.

Naguib Sawiris, CEO of Orascom Investment Holding, said in a related context: “we are very proud that our company gets to develop the area that ranks first in the world, and is the most renowned and important in the Giza plateau offering visitors a unique experience for Egyptian and foreign visitors, to support Egyptian tourism and help put it in its rightful place in the world.” He further pointed out that services offered by Orascom in the area are “supported by the latest technologies in line with international and ecological standards”.

Hisham Gadallah, Chairman and CEO of Orascom Pyramids Entertainment, said that clean energy systems in the Giza plateau is in accordance with reducing carbon emissions, particularly in light of Egypt hosting COP 27, the United Nations Climate Change Conference hosted in Sharm El-Sheikh next November. In this context, Orascom Pyramids Entertainment observes the highest sustainability and ecological levels in light of its corporate responsibility by relying on new eco-friendly vehicles and on waste recycling, in addition to solar powered street lamps. He further stated that recycling comes within the drive to reduce environmental pollution. He further expressed “we are striving to offer a unique touristic and cultural and entertainment experience in the greatest of destinations, and we will work with a dedicated team to operate services to the archaeological site according to international standards.”

“It is time for the world to witness the new services offered to visitors of the Giza plateau using clean energy systems inside the Giza Plateau representing the oldest of civilizations” he added. He further added his thanks to the strategic partners of Orascom Pyramids Entertainment (such as the National Bank of Egypt, and Orange Telecom) for their exceptional support and participation in offering new services to visitors of the area, to help offer an unprecedented uplift in the quality of services offered to visitors.

In October 2020, the pilot of operating an electricity powered eco-friendly bus took place, in addition to the opening the first restaurant and rest within the area of 9Pyramids Lounge which is considered the most well-reputed among Egyptians and Foreigners alike.

Orascom Pyramids Entertainment (OPE) is an Egyptian joint stock company, a subsidiary of Orascom Investment Holding (OIH). It develops and provides touristic services within the visiting area of the Giza plateau by virtue of the usufruct and services agreement with the Supreme Council of Antiquities for a period of fifteen years.