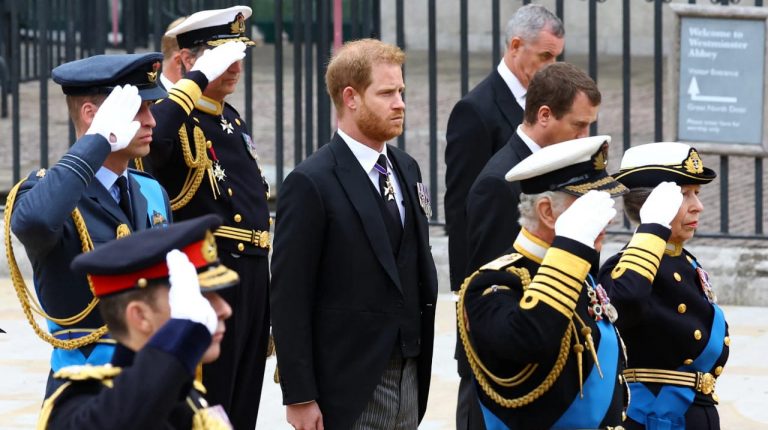 Walking behind Queen Elizabeth II’s coffin last week might have transported Prince Harry back 25 years to the same walk after his mother’s tragic death – I say transport, not remind, because that’s how trauma works.

When Prince Harry lost his loving mother in August of 1997, he was sent down a different path. Being one of the most privileged people in the world did not exempt him from the ways in which trauma affects all people.

“I can safely say that losing my mum at the age of 12, and therefore shutting down all of my emotions for the last 20 years, has had a quite serious effect on not only my personal life but my work as well,” said Prince Harry in 2017, when he began opening up about his traumas.

I also lost a parent at a young age, but my interest in Prince Harry’s transparency about his traumas is professional.

Working as an economist on poverty, health, or employment, it is clear. Traumas send people down a different path they may not recover from – not without help. I have seen it in colleagues, classmates, students, friends, and family – because it is simply so common.

People remain prisoners of the past until traumas are resolved.

Changes in behaviours, perspectives, and perceptions deny people what they want in life, personally and professionally, because traumas wreak havoc on the brain and body. Natural talent and potential are squandered. Families, societies, and economies all pay a price.

Through his openness and vulnerability about his experiences, Prince Harry is highlighting three fundamental features of trauma – shame plays a big part, people’s experiences can be explained by science, and traumas are more complicated when they directly involve family.

Although traumas are common everywhere in the world, time and again, in almost all societies, shame triumphs over humanity and pragmatism in dictating a response.

“The Me You Can’t See,” is a six-part documentary series on mental health released last year on Apple TV+. It features stories from around the world, and as with other interviews, Prince Harry being very candid about his traumas.

“I think Harry’s remarks have been damaging, but they’re coming from someone who is damaged,” said Robert Jobson, author of books on Princess Diana, about Prince Harry when the series debuted.

Shame is characterized by a belief that you are “bad” and is based on a distorted sense of being unworthy, damaged, or a failure.

People universally feel ashamed about traumas they have experienced, and typically blame themselves – on some level believing that terrible things happened to them because they are terrible. That is made worse when shamed by others.

Shame even makes eye contact difficult, unable to tolerate being seen. Think about how important eye contact is for personal and professional relationships.

As with all features of trauma, shame has a deeper connection to the brain and body.

One study investigating how intense shame is reflected in abnormal brain activation recorded brain activity when being shown images of a friendly cartoon character that either approached with a direct gaze or at a 45-degree angle with an averted gaze.

For very traumatised people, a direct gaze elicited an intense activation deep inside their emotional brains, in a primitive area, which generates startle, hypervigilance, cowering, and other self-protective behaviours. There was no activation in advanced brain regions involved in social engagement or assessment. Instead, very traumatised people simply went into survival mode.

The shame people feel is often about what they themselves did or did not do during a traumatizing event. They can despise themselves for how terrified, dependent, excited, or enraged they felt, although these are natural human reactions.

If you are or were traumatized at work, for example, it is typical to become and remain enraged at your inability to react in the way you wish you did.

But the brain and body have natural reactions that cannot be controlled until a trauma is resolved. This is not human weakness; this is science. People would experience less shame if more of the science of trauma was better understood more widely.

The science of trauma

With the death of his grandmother, Prince Harry has returned to the royal spotlight – back to the very things that made him leave it – negotiating the triggers and flashbacks of his traumas while under relentless attack from the British media.

In “The Me You Can’t See,” Prince Harry talks about his triggers – which include flying into London – his hometown.

“I was worried about it. I was afraid about it…the heart still pounds…that’s a trigger, just like it is for anybody else,” he said in May 2021, when he was asked about returning to London for his grandfather, Prince Phillip’s funeral, the previous month.

Many have no idea why something innocuous or even a minor irritation makes them or others respond as if they were about to be annihilated, but that’s how triggers work.

Have you ever witnessed someone lose it over something minor? Would your reaction have been different if you knew the person was experiencing a trigger to a horrible event or experience that changed life forever?

Experienced differently, triggers are irrational and beyond people’s control until the trauma they are connected to is resolved.

If a trauma remains unresolved, as the body’s response keeps getting replayed, it imprints more deeply in the brain and on the body – leaving a person feeling increasingly less fully alive in the present and more stuck in the past.

When flashbacks are triggered, it is reliving not remembering. At that moment, the brain makes no distinction between the past and the present – a response is activated with all the original emotions, sounds, images, thoughts, and physical sensations.

Whether describing walking behind his mother’s coffin or the first memory of her that comes to mind for him, her struggling to see while driving because of tears from being chased by paparazzi with him and his brother in the backseat, it suggests these are flashbacks and not memories for Prince Harry.

“My way with dealing with it was sticking my head in the sand, refusing to think about my mom, because why would that help?” he has said. “So from an emotional side, I was like, ‘Right, don’t ever let your emotions be part of anything.'”

A frequent way people bury their emotions is numbering through drug and alcohol use and abuse.

Prince Harry openly discusses how from ages 28 to 32 he abused drugs and alcohol. Some people exercise a lot or stay perpetually busy. Even with more positive behaviours, these can be signs of avoidance, signalling a trauma is not resolved.

These responses people have to trauma are not reflections of human weakness. Traumas leave enduring imprints on the brain, the body, and the behaviours of individuals.

People may not have all these expressions of trauma; it is experienced differently. If they do not, it does not necessarily mean they are not traumatized, or they have fared better. It could just be one of the many ways the brain protects a person, which may not last.

Attachment bonds are the greatest protection against threats – like trauma. People, and especially children, naturally turn to family for care and protection.

Whether it was hugging children with HIV/AIDS or children and adults disabled by landmines, the world often saw Princess Diana’s loving and compassionate touches.

Much of the brain’s wiring is dedicated to being in tune with others. That is why trauma that has occurred within relationships is generally more difficult to treat than those from external events.

Losing his mother, who seemed very attuned to his emotions, would make the trauma of her death worse. She might have been his best protection against the worse consequences of trauma.

Traumatised people recover through relationships when they provide physical and emotional safety, including safety from feeling shamed, scolded, or judged. Relationships also help people strengthen the courage to tolerate, face, and process what happened.

Safety and terror are incompatible. Adults, like children, experience calm from a reassuring voice, a hug from someone trusted, and an assurance that somebody bigger and stronger is taking care of things.

Whether describing being with his crying mother chased by paparazzi or more recent incidents with his wife, Prince Harry frequently brings up his family’s lack of protection, as well as their dismissal of his feelings when discussing his traumas.

If instead of safety there is terror or rejection, a person will learn to shut down and ignore valid feelings, and trauma will take a stronger hold. Alternative ways of dealing with feeling scared, angry, or frustrated will be sought – like burying your emotions and/or substance abuse.

“My father saying to William and I, well, it was like that for me so it’s going to be like that for you. That doesn’t make sense,” said the Prince Harry in “The Me You Can’t See”.

Interestingly, children separated from their parents after a trauma are likely to suffer serious negative long-term effects. Studies as far back as World War II show that children who remained with their parents in London during German bombing raids fared better than those who were sent away to the countryside for protection like Queen Elizabeth II.

The transmission across generations of the same family is one of the ways trauma is made more complicated when directly involving family.

That Prince Harry, his brother, and other family members share traumas – like his mother’s death – makes it more complicated. Each person will experience the same trauma individually, impacting connections.

Being affected by the same trauma makes it more difficult to provide someone else with the support needed. And maybe, like in many families, Prince Harry’s family does not have the capacity to do that anyway.

Prince Harry credits his brother, Prince William for urging him to get help, but there is little public indication of how the number one heir to the British throne has processed or resolved his own traumas.

Duty and outside appearances are not problems only the Royals face. In many families, the presentation to the external world is prioritized over the inner worlds of individual members – and that kind of betrayal strengthens the hold of trauma.

Families sometimes have narratives and assessments that are unkind and unfair.

How often have you heard a family member dismiss, mock, or scold another when talking about a traumatic event or experience? Truth and acknowledgement are important for healing.

“It was 20 years of not thinking about it and then two years of total chaos,” Prince Harry said. “I couldn’t put my finger on it. I just didn’t know what was wrong with me.”

People who experienced traumatic events often do not make the connection between what happened to them in the past and how they feel and behave in the present. Relief does not come until they are able to acknowledge what happened, recognize their invisible demons, and find a path to resolution.

To me, Prince Harry is a human who has the courage to speak openly, drawing attention to the experiences of trauma shared by so many in the world, even when family makes that more complicated.

If elements of what I have written resonate with you or a loved one’s experiences, I hope that you might see things differently. Resolving traumas is scary, but that is the only way of relegating the past to its rightful place and getting out of life what unresolved trauma will continue to deny – personally and professionally.

Dr Iris Boutros is a behavioural and development economist and strategist. She writes about employment, enterprise development, inclusion, and economic growth. Her work currently focuses on gains and value from connecting behaviour, the brain, and the body.