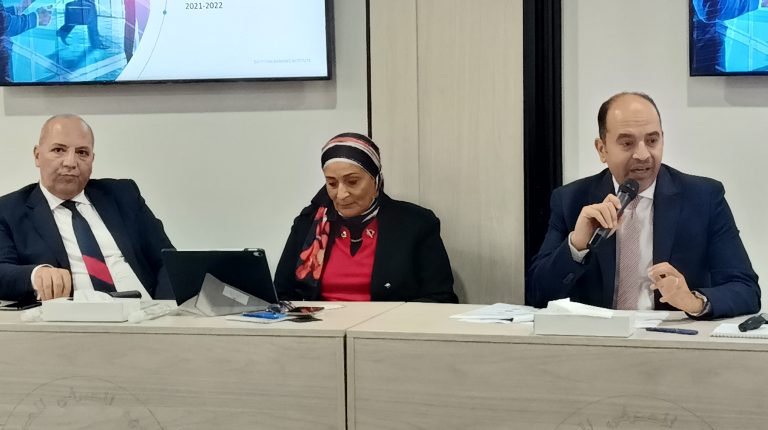 The Egyptian Banking Institute (EBI), the official training arm of the Central Bank of Egypt, announced its achievements for fiscal year (FY) 2021/22, confirming its commitment to develop and train the human capital in the banking and financial sectors; which resulted in several outstanding accomplishments positioning the Institute as a pioneer in learning, development and assessment across Egypt and the African continent.

In this context, Abdel Aziz Nossier, Executive Director of the EBI, expressed his delight at the Institute’s journey in terms of development, growth and achievement of sustainable success by announcing the activities and initiatives offered by the EBI during FY 2021/22, which reflected its excellence on both, local and regional levels. He added: “This year, the total number of trainees that benefited from the EBI’s training programmes reached 68,770 beneficiaries. As for the EBI’s assessment services, 59,495 candidates were assessed for the purpose of hiring, development and promotion. As for our international programmes, the EBI delivered 130 international programs in cooperation with 73 international training and financial organizations.”

In continuation of the EBI’s role in supporting the development of human capital in the African banking sector, the Institute succeeded in providing training services during FY 2020/21 to more than 500 professionals in the African banking sector, where we received the first two trainees from Guinea-Bissau, bringing the total number of beneficiaries that benefited from the EBI’s training services to reach 4000 trainees from 44 African countries.

Within the framework of the EBI’s strategy to strengthen its relations with the African continent, a delegation from the EBI visited Tanzania where the Institute successfully recognized the training needs required by a number of banks in Tanzania, as well as identifying aspects of cooperation between the EBI, the Tanzanian Banking Institute, and the Bank of Tanzania Academy. Following to the visit, the EBI received a delegation from Bank of Tanzania and its institute to get an insight about the EBI’s experience and to study its work systems, in addition to signing a cooperation agreement with the Bank of Tanzania Academy, which aims to offer the EBI’s training services in Tanzania and other African countries. Furthermore, the EBI also invited a delegation from the Central Bank of Sudan during its annual conference held in June where a meeting was held with a number of Sudanese banks to discuss ways of cooperation with the Sudanese banking sector.

Nossier added that during FY 2021/22, the EBI launched a new 5-year strategy that included 5 strategic objectives, from which 19 initiatives emerged and the EBI’s vision and mission have been modified to align with the new strategy. Nossier also indicated that one of these initiatives was to develop a new business model to enrich the EBI’s service offerings where a team of Relationship Managers was formed to act as a direct point of contact within the banking sector to fulfil their requirements proficiently, and another team was formed for designing and developing the training materials in line with the latest international standards.

As a continuation of its efforts to adhere the international quality standards, the EBI has obtained accreditation for its virtual learning programmes and its e-learning programmes from the Accrediting Council for Continuing Education and Training in the United States of America (ACCET), which has previously granted the EBI the international accreditation three times; in 2009, 2014, and 2019.

In the context of supporting the role of women in the banking sector, the EBI launched the “Women on the Board of Directors” Professional Certificate that helped them gain the skills they need to develop their understanding of their role and responsibilities to effectively serve the Boards of Directors with prudent decisions.

Nossier expressed his contentment that things have returned to normal after the restrictions imposed by the Corona pandemic over the past two years that have prevented the EBI from conducting its study tours abroad. As such, this year, the EBI conducted the second round of its Harvard Business School Executive Leadership Program with the participation of 46 executive leaders representing 16 banks and financial companies. Also, the external part of the Future Leaders Program for groups 30 and 31 was conducted in Barcelona, ​​Spain. In addition to the Cybersecurity study tour in Budapest, Hungary, that was attended by 12 participants from IT departments in various banks to have a deep look at the international Cybersecurity best practices.

Adding on the EBI’s successes, Nossier stated: “In order to implement the directions of the Central Bank of Egypt to support people with disabilities, we have conducted nine rounds of the “Sign Language” programme that was attended by more than 200 participants from banking sector employees. In addition to launching a new programme that highlighted how bank employees should deal with people with disabilities through an interactive environment.”

Building on EBI’s markable record of achievements in the human capital development industry, this year EBI won a number of awards; “The best financial training institute in the MENA region” award from the international magazine; Capital Finance International” and the “Best Companies” award during the Education 2.0 conference held in Dubai, based on the criteria of its adherence to international quality standards in offering its services, variety of its training offerings and excelling in providing state of the art training solutions in line with the latest industry international best practices in cooperation with international organizations.

As part of the Institute’s continuous endeavour to provide the best level of services, the EBI cooperated with Explorance, the leading provider of People Insights Solutions, by utilizing its L&D Effectiveness Solution, Metrics That Matter (MTM). The solution will automate the learning measurement process for all programmes offered by the EBI where reports will be issued to measure the level of customer satisfaction of the Institute’s services before, during and after the end of the training process.

Emphasizing its tangible impact in developing the workforce and the calibre of human capital in the banking and financial sectors over the past years, the EBI has been elected to the new Board of Directors of the European Banking & Financial Services Training Association (EBTN) from 2023 to 2025.

In celebration of the 30th anniversary of its establishment, the EBI held its 10th annual conference titled “The Evolution of banks: Unlocking the Full Potential” under the auspices of the Central Bank of Egypt, over two-days. The conference tackled the changes and impact on the international and local banking sector over the past years, where a group of prominent experts from prestigious institutions and international organizations have participated in the conference sessions, in addition to the participation of top-notch Egyptian financial and banking experts. The conference’s agenda also included the graduation ceremonies of four groups of the Future Leaders Program, two groups of the African Future Leaders Program, a group of the Corporate Finance & Credit Certification Program provided by Financial Edge and Moody’s Analytics with guidance from J.P. Morgan. Also, the winners of the EBI’s Innovation Competition 2022 were recognized during the conference.