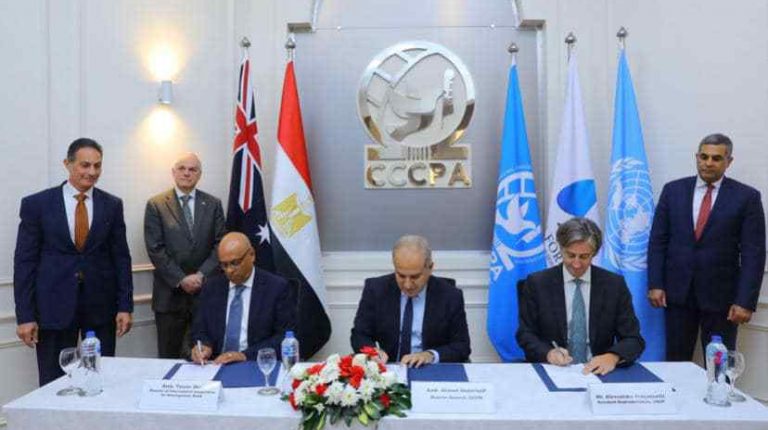 The Cairo International Centre for Conflict Resolution, Peacekeeping, and Peacebuilding (CCCPA) hosted a signing ceremony for a first-of-its kind project with the Australian Department of Foreign Affairs and Trade (DFAT) through the UN Development Programme (UNDP).

The project is titled ‘Advancing Holistic, Whole-of-Government, and Whole-of-Society Approaches in Curbing the Spread of Terrorism in Africa.”

The project aims to strengthen and develop African capacities through a tailored range of activities. These activities will be implemented through the CCCPA’s programme on Preventing Radicalisation and Extremism Leading to Terrorism (PRELT), which capacitates religious and community leaders with the requisite knowledge and skills to deconstruct and refute extremist narratives and create positive and alternative ones grounded in peaceful coexistence and moderate religious teachings.

Accordingly, it aims to enhance the capacity to address the drivers of extremism through early intervention and community engagement, as well as by challenging terrorist propaganda and recruitment techniques.

Anchored in the belief that responses must be multidimensional, the project seeks to advance whole-of-government and whole-of-society responses in curbing the spread of terrorism.

It is premised on the importance of leveraging the role of local communities — especially female community leaders — in preventing radicalisation and extremism leading to terrorism as part of advancing comprehensive and holistic approaches in addressing the terrorist threat. The project is a clear reflection of the counterterrorism priorities of the Egyptian and Australian governments.

This timely project comes at a critical juncture, as the African continent continues to bear the brunt of protracted violence and terrorism, causing human and economic losses and hindering its path towards sustainable development.

According the 2021 Global Terrorism Index report, Sub-Saharan Africa accounts for almost half of the deaths attributed to terrorism globally, with the Sahel region alone recording an alarming 35% of global deaths from terrorism.

In his remarks during the event, Abdel Latif conveyed the CCCPA’s appreciation for the Australian government’s cooperation, particularly DFAT and the Office of the Ambassador for Counterterrorism.

He also highlighted the CCCPA’s work in building African capacities in the field of preventing radicalisation and extremism conducive to terrorism through its homegrown PRELT programme.

Launched in 2016, the programme targets the grassroots level with local communities from various African countries. In this context, Abdel Latif emphasised the importance of investing in prevention efforts and resilience-building, reflecting on the central role of the CCCPA’s PRELT programme in leveraging the pillars of community resilience, such as the social influence exercised by religious and local leaders in their communities.

For his part, Wabenhorst stated that “Australia is proud to collaborate with the CCCPA on this worthy initiative.”

He also highlighted that violent extremism continues to pose a significant threat to international peace and security, with African and Arab nations particularly affected.

Moreover, Wabenhorst emphasised that this project — which aims to prevent extremist ideas from forming and spreading in the first place — “attacks the problem at its source.”

The CCCPA is an Egyptian public agency specialising in capacity building, convening, and research in the fields of peace and security in Africa and the Arab region.