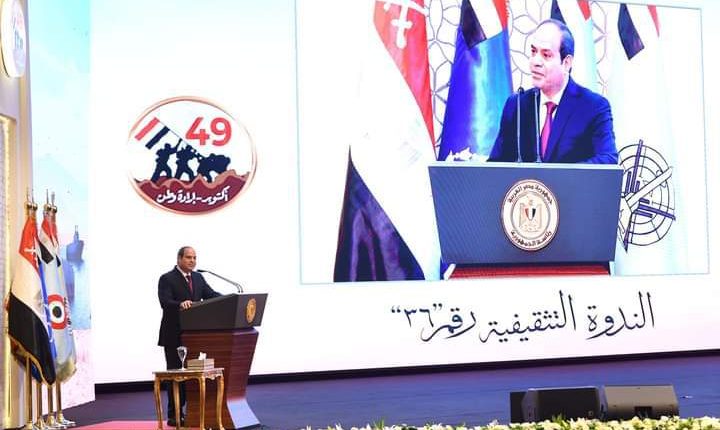 Egypt’s President Abdel Fattah Al-Sisi said that the real enemy of the country is poverty, ignorance, and underdevelopment, and that the “New Republic, in which we seek to achieve safety and stability, aims to achieve the aspirations of the current and future generations.”

He added that the relationship between the Egyptian people and army is eternal; stressing the state exerts “sincere efforts” to overcome the global economic crisis.

In his speech during the 36th educational symposium of the Armed Forces on the occasion of the 49th anniversary of the October 1973 War. The president added that there are still evil forces that harbor all the meanings of hatred, “so they spread their toxins in the arteries of the country by spreading lies and slander and delusions, with the aim of losing the citizen’s confidence and assassinating his morale.”

Al-Sisi pointed out that rumors and lies spread daily, but they do not frighten him, especially since the Egyptian people are well aware and understand them.

The president pointed out that Egypt has paid a great price in fighting the forces of evil, stressing that the Egyptian state agencies have not stopped working over the past period. He pointed out that whoever practices terrorism aims to disable Egypt and its backwardness.

During the ceremony, Al-Sisi honoured the heroes of the Battle of Abu Atwa during the October 1973 war. In the battle of Ismailia or Abu Atwa, the Egyptian Armed Forces repelled the Israeli tanks when they tried to enter the city during the 1973 war.